Feel The Intensity Of King John 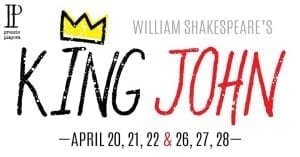 Laughs, tears and excitement are all included in the newest amazing production from the Prenzie Players, King John.

The close-knit stage setup only intensifies the emotions garnered in the latest accomplishment of Prenzie Players’ goal to perform William Shakepeare’s entire canon. As soon as you walk into the door you can feel the energy swirling around in the building. Step into the stage area and every fiber of your being screams INTENSITY! 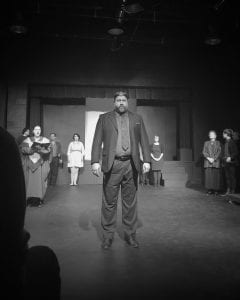 While adjusting to your surroundings, you can appreciate the very enjoyable audio pleasures playing throughout the room. When the lights dim, the anticipation kicks in. Cue the onstage talent.

Director Kate Farence deserves some major props for this rendition of King John. While the dialogue is pristinely original, the delivery makes it feel so much more modern. Even if you don’t have a knack for Shakespearean interchange, you will still be able to follow this story line. The energy and emotions that are encapsulated through tone, enunciation and delivery will leave you feeling everything Shakespeare originally wanted his audience to experience. 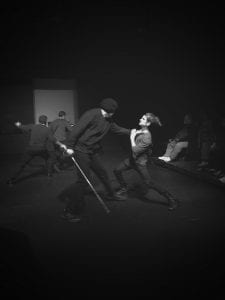 Jeremy Mahr (who can most often also be seen at Comedy Sportz), mastered the role of King John of England. Whether he is comedically throwing jests at other cast member

s or delivering a heart-felt monologue, he will keep you on the edge of your seats. Jessica White’s (also a hilarious performer at Comedy Sportz) performance as Constance will leave you feeling empowered one moment and in the depths of despair the next. Bring tissues! The exchanges between Nathan Klaus and Tracy Skaggs are most enjoyable. These two actors really know how to keep the audience entertainment, that’s for sure!

Brody Ford, one of the youngest cast members, plays Prince Henry magnificently. It’s wonderful to see the Prenzie Players embrace young local talent and make them feel welcome. Brody says, “There’s something about working with the people that I love that makes me feel good”. Well Brody, watching you on stage makes everyone feel good! 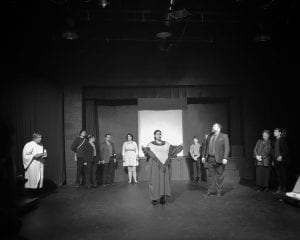 Did I mention the fight scenes? The fight scenes! Fight Choreographer Aaron E. Sullivan and Fight Master Payton Brasher have taken this play to the next level with the intense and even sometimes hilarious moments of brawl action.

If you haven’t made it to Prenzie Players (1730 Wilkes Ave Davenport) to catch a performance yet, you’re in luck! There are still 3 more shows!

Thursday Apr 26, Friday Apr 27 and Saturday Apr 28 you can catch an 8 p.m. show (doors open at 7:30 p.m.) Ticket prices are $10 if reserved twenty-four hours in advance and $15 for walk-up seats. You can reserve your seats by emailing tickets@prenzieplayers.com, leaving a voicemail at (563) 484-4210 or online at https://docs.google.com/forms/d/e/1FAIpQLSc1fjJhBJC97uSj2xR2DYG67tjkIPO4urW7EVnWt9W_lS7zrw/viewform.

Come see Prenzie Players’ rendition of William Shakespeare’s King John, the story of England’s maniacal monarch and his violent pursuit of power, by whatever means necessary, this weekend. You won’t regret it!

Tess Abney
Tess Abney was born and raised in the Quad Cities. Her passion for writing and entertainment was apparent at a very young age. Whether it is sharing local events and businesses with readers or sharing her thoughts on life, she finds comfort in the way words can bring people together.
See More Articles From Tess Abney
Tagged: King JohnPrenzie PlayersQuad CitiesWilliam Shakespeare