With so many people working from home and so many artists left to scramble during this interminable pandemic, it makes perfect sense that Rock Island-based actor Anthony Natarelli would do a play from home. 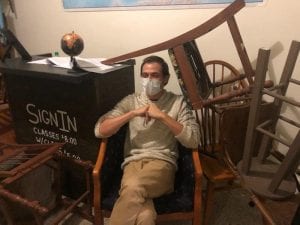 Presented under his three-year-old $1 Producer Project, the irrepressible 26-year-old is offering the haunting, elegiac “Lonely Planet” (1993) by Steven Dietz, from his apartment above the Circa ’21 Speakeasy, livestreamed in three performances this weekend. The play’s content is also depressingly appropriate for our times.

And though Natarelli has directed and co-stars in the intimate 90-minute show (including an intermission) from his place, great pains have been taken to make this a fully realized piece – in some ways more affecting than if you saw it live in a theater.

The masked actors – including Mike Turczynski, a veteran director and lighting designer I had never seen act before – portray two gay men during the height of the 1980s AIDS crisis, another cataclysmic viral epidemic that shattered the nation.

In the “Lonely Planet” story, Jody (Turczynski) is in 40s and runs a map store, which apparently has no customers. Not one for the outside world, he stays in his store all the time. His friend, Carl (Natarelli), is in his late 30s and has been bringing chairs of dead friends into Jody’s store and leaving them there.

Though the word “AIDS” is never mentioned, we hear about the painful death of friends, which drives the childlike Carl over the edge. Natarelli is perfect in the part – very passionate and frenetic in often unhinged rants. Jody at several points wants to play a game to get at the truth, since he doubts Carl’s fanciful tales of working as an art restorer, in an auto-glass shop, a water plant, or writing for a tabloid.

They also get into some titanic fights, including over Carl’s incessant need to fill the store with chairs, which are haphazardly stacked throughout the place. There’s a later reference to the 1952 absurdist Eugene Ionesco play, “The Chairs,” in which the two protagonists kill 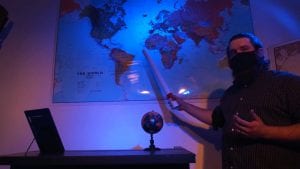 Mike Turczynski as a map store owner in “Lonely Planet.”

themselves at the end. “Lonely Planet” certainly shares some of that absurd, tragic nature.

But don’t get the idea that it’s entirely a downer.

The Dietz two-hander is a compassionate portrait of friendship and familial support. The two men aren’t lovers, but the touching Turczynski as Jody is more a patient, paternal figure – obviously caring about Carl, he seems more sane and level-headed. Both guys have their issues and demons, and the map store serves as a kind of psych ward, where the patients are left to fend for themselves.

“Lonely Planet” gets its title from Jody’s monologue about an Apollo 17 photo of the Earth (from the final moon shot in 1972). It captures our planet’s grandeur and beauty, but also its small, isolated nature, out in the vastness of space, Jody says. 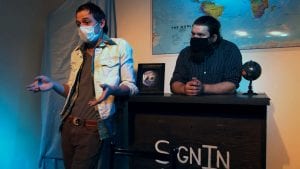 Turczynski also captures his wonder at the world’s geography, noting the two large maps in his store. The main one behind his counter is the standard map we all know, but he says it distorts the size of many countries, including blowing up Greenland and the former Soviet states out of all proportion. The other map reflects nations more accurately, though Carl says it looks really weird.

With Turczynski in charge of the lighting design and Khalil Hacker the cinematography, we get a wide variety of moods and camera angles in the look of this. The dimmer, purplish-blue lighting at certain points is mesmerizing, and (I’m not sure this was intentional) Jody’s monologue about being a “boxer” with Carl in his corner is apt, since Natarelli can be seen at rear left in a corner.

Toward the story end, Jody goes to get an AIDS test, and Carl tries to convince him it is not only okay to leave the store but also that he must take responsibility for his life. 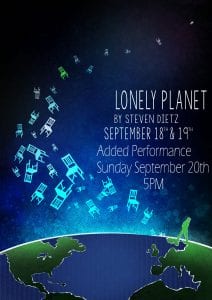 “Lonely Planet” will be livestreamed three times this weekend.

Natarelli started the $1 Producer Project in 2017, on patreon.com, as a manageable idea for people to financially support local entertainment.

“We rely heavily on a community of supportive people to make each project happen,” the page says. Inspiringly, Natarelli is finding creative ways to still provide us thoughtful, urgently needed theater.

“Lonely Planet” will be presented at 8 p.m. Friday and Saturday, and 5 p.m. on Sunday. Tickets are $10, available at http://www.Showtix4u.com/Events/OneDollarProducer.

Jonathan Turner
Jonathan Turner has been covering the Quad-Cities arts scene for 25 years, first as a reporter with the Dispatch and Rock Island Argus, and then as a reporter with the Quad City Times. Jonathan is also an accomplished actor and musician who has been seen frequently on local theater stages, including the Bucktown Revue and Black Box Theatre.
See More Articles From Jonathan Turner
Tagged: $1 producer projectAnthony NatarelliKhalil Hackerlonely planetMike TurczynskiQuadCities theater