Home › Columns › Sean Leary › OPINION: Rock Island Should NOT Sell Its Water And Sewer, And Its Leadership Needs To Stop Entertaining It

OPINION: Rock Island Should NOT Sell Its Water And Sewer, And Its Leadership Needs To Stop Entertaining It

UPDATED: After a lengthy question and answer session with American Water, I still think Rock Island selling its water and sewer would be a horrible idea, and I think the Rock Island mayor and city council needs to stop being disingenuous about stringing the idea along and put it aside.

After I’d previously written on the subject, I was happy to hear from Karen Cotton, Senior Manager, External Communications, for Illinois American Water. I understand it takes a good amount of courage and initiative to contact someone who has expressed a contrary idea, 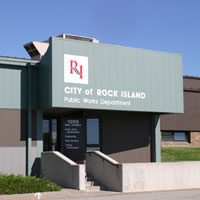 particularly one going against a goal of your business, and I appreciated that she engaged me and was polite and helpful in answering my questions.

She did a very good job of answering them, and, as a public relations professional myself, I admire her responses. I have no doubt she is sincerely representing her company, and that, under ideal circumstances, many of the positive things she mentioned could indeed result in a solid outcome for citizens.

But I still don’t think it’s worth taking the chance.

As I previously mentioned, there are many anecdotal and professionally reported stories online which do not paint previous privatizations of water and sewer in a positive light, including many knocking American Water. According to data released in a 2017 Chicago Tribune expose, the Illinois Commerce Commission (ICC) approved an initial 40 percent rate increase in 2003 in Homer Glen, Illinois. Then, a 26 percent increase in 2010. In 2017, a 15 percent increase. That’s over 80 percent in 14 years. There are other articles available for perusal online as well, not to mention that Googling “American Water rate increases” or “American Water customer service” produces a bounty of anecdotal replies, the vast majority to the negative.

However, even if all of those can be cast aside as sour grapes, I still do not think the privatization of such a necessary resource as water is a wise decision for any city, particularly Rock Island.

Rock Island is already in horrible financial shape due to a series of previous poor decisions. The last thing it needs is one more horrendous choice. And selling off something which should be considered a bedrock of city services, a service which is literally integral for the life of its citizens, would be a catastrophic decision that would haunt the city for decades to come, and could end up being a death blow to any of its chances for a resurrection. 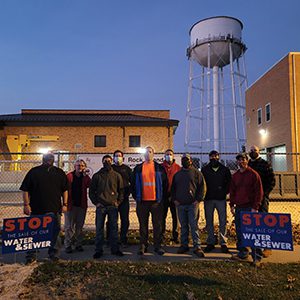 Protestors stand outside city offices to stop the sale of its water and sewer.

Even if American Water had a wonderful track record replete with glowing online praise from customers, I would still be against privatization because once you sell off a necessary service like water and sewer, you aren’t getting it back, and you never know who’s going to end up with it. American Water could be fantastic. But they’re also a private company, and private companies are out to make as much money as possible. And that means that there’s no guarantee that they would continue to be the owner of Rock Island‘s water and sewer. They could sell to another company. And that company could sell to another. And there’s nothing the citizens of Rock Island could do about it.

As long as the water and sewer are in the hands of the city, the citizens are its owners. We ostensibly control it, and can continue to exercise at least a modicum of control over its services through the recourse of governmental pathways, which include voting in, or out, members of city government who do not oversee its utilization adequately.

This should be something that the current leadership keeps under consideration.

Many current city officials have been circumspect regarding their intentions about the privatization of the water system, particularly leading up to the last election cycle. I asked Mayor Mike Thoms several times in interviews about it, and, to his credit, I found him to actually be one of the most transparent in regard to his intentions to consider it and listen to proposals. I disagreed with him, on the record, on my podcast QCUncut, in regard to this issue. I could understand the idea of exploring different options, but I did not think the city should seriously consider selling. However, at least I give Thoms credit for consistently being honest with me about his intentions. I’ve also heard from others, behind-the-scenes, that what Thoms has said to them echoes exactly what 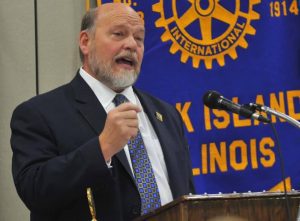 he said to me.

That’s what government representatives SHOULD do. They SHOULD be honest and consistent about their intentions. That way the public, which votes them in, or votes against them, has an accurate picture of who they are voting for and what they stand for.

Unfortunately, not all of the current Rock Island elected representatives have been as transparent, and many have been circumspect.

Some have publicly dawdled or put forth the pretense of “careful consideration” of this issue, while privately, and in some cases not so privately, stumping for the sale.

That’s disingenuous and disappointing to say the least.

If you’re proud of something, if you truly believe it’s the right thing to do, if you truly believe it’s best for the city and its citizens, you should be up front, honest, and completely transparent in stating so. You should have the courage to stand by your opinions and defend them, not hide behind obfuscation and euphemism, playing politics and being circumspect until someone else makes the decision and you throw up your hands and back them as if you have no other choice, doing what you wanted to do all along but lacked the spine or integrity to do.

We’re entering a new era in politics, thank God. One where people are fed up with that kind of fake, phony malarkey, to use a Bidenism.  And there should be no malarkey in regard to this issue. It’s too important. Water and sewer is too important, and the control of such needs to be addressed with appropriate weight. The right decision needs to be made, and that decision is to keep the water and sewer in city hands.

Certainly, there will have to be improvements and repairs made to the system, and there will have to be rate hikes to pay for those. The council has already voted on some rate hikes. But those council members voting for those increases should NOT be penalized for them, they should be lauded for making a correct, albeit difficult, decision. The rate hikes should be seen as an investment by Rock Island‘s citizens, an investment in our future, in something we own, something we need, something that’s vital to our city. That is what taxpayer dollars are for — pooling our resources to pay for things far beyond our own purview and to pay for their continued maintenance and upkeep.

That is the appropriate solution to this problem. Not selling off water and sewer in a short-sighted grab for the quick buck while gambling away the future of a vital human need.

Rock Island should not sell off its water. And Rock Island city officials need to stop entertaining the option and finally take the kind of real leadership the city has been long lacking by saying no to the sale, and no to even considering it.