Words and art are my business – as tools, objects of affection, contemplation and worship, ways to make sense and meaning of life – as they are for “Red,” the brilliant, caustic, literate John Logan play given a fantastic, thrilling new production by Mississippi Bend Players at Augustana College. 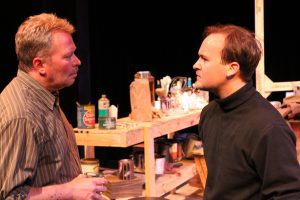 Over an emotional 90-minute rollercoaster — in an action-packed, dialogue-dense one act, first-class director Cait Bodenbender and peerless actors Mike Schulz and Tristan Odenkirk grab your attention and never let go. It’s as riveting, passionate, thought-provoking – and deeply committed – a piece of theater I’ve seen in a long time.

Just because “Red” is only a two-person one-act, don’t get the idea it’s a small play. It contains multitudes, and many big themes – simply the heart and soul, meaning and motivation behind artistic creation itself is as large as the universe. Logan – with painstaking precision, wit and care – also articulately addresses the influence of mentors, parents, youth and aging, commercialism, popularity, legacies, and our own personal interpretation of art. 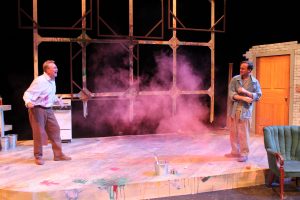 Schulz as Rothko erupts at his fictional assistant Ken (Odenkirk), including a burst of red paint powder.

“Art Matters” is the fitting 2021 season theme for MBP, the professional summer stock company at Augustana’s Brunner Theatre Center. If the long, painful Covid pandemic taught us anything (other than masks and vaccines work), it’s the value of arts and culture to all our lives – I literally couldn’t live without it.

After over a year of staying home (I still work from home) and isolated, MBP producing artistic director Jackie McCall wrote in the program that they’re “blessed to be able to bring back the incomparable shared experience of sitting in a darkened theatre amongst friends and strangers, witnessing a story unfold before our very eyes.”

Theater always has been a way we make sense of the chaos that surrounds us (together as a communal, unique experience), so staying away over the past 15 months has been very painful, she wrote.

“This year helped to prove something that theatre already knew to be true…art matters!” McCall wrote. “Art allowed us to mentally escape the confines of our homes. It entertained us, educated us, and inspired us with many wonderful virtual productions and streaming shows. And yet it wasn’t enough. Nothing can adequately replace the experience of a live performance.”

Bodenbender wrote in the program that 20th-century artist Mark Rothko has a lot to teach us (surely in sheer verbiage and profound significance), through his fictional young assistant Ken. Especially since Rothko was an abstract expressionist, working in bold colors and 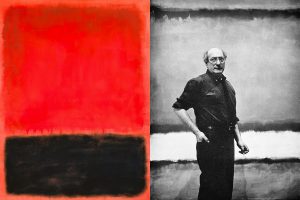 Artist Mark Rothko — who ultimately turned down the Four Seasons restaurant commission — and one of his murals. Credit: Artsy.net

simple, blocky shapes, it’s so illuminating to understand what he thought of his work and what he wanted others to see in it.

Through the titanic, tumultuous, contentious two-year relationship of the mentor and apprentice (the stellar, moving Schulz and Odenkirk), “Red” not only explores  “the personality of a great painter at his prime, but also the intense and always unique journey of becoming and living as an artist,” the director wrote.

And appropriately, Bodenbender welcomed us “home,” as the theater often is for performers and arts lovers. Compared to the first Q-C production of “Red,” in which Schulz starred opposite Tom Taylor in 2012 at Davenport’s QC Theatre Workshop, this seems a super-sized, even more intense, magnified version of the play – including a much larger space, more set and props, and bigger emphasis on music.

In the 2010 Tony winner for Best Play, Rothko (1903-1970) has just landed the biggest commission in the history of modern art, a series of murals for New York’s famed Four Seasons restaurant in the late ‘50s. The prickly, moody, and vastly opinionated artist works feverishly

with the more innocent, well-meaning Ken, in his studio on the Bowery.

But when Ken (here played by 2020 Augustana grad Odenkirk) gains the confidence to challenge him, the egotistical Rothko faces the agonizing possibility that his crowning achievement could also become his undoing, according to an MBP synopsis. “Raw and provocative, ‘Red’ is a searing portrait of an artist’s ambition and vulnerability as he tries to create a definitive work,” it says.

As Rothko is the ultimate sensitive artist (simultaneously deploring the public and seeking their approval), he initially invites Ken to tell him what he sees in his paintings. “Be kind, a human being. The picture deserves compassion,” the tortured artist says. His aim in art is to “stop your heart, make you think,” not to paint a pretty picture that matches a sofa.

But later in a series of vitriolic, hurtful rants, Rothko erupts at his assistant at many points, decrying his response, opinions and his take on

other great artists (both past and then-present). Rothko’s own perspective on everyone from Caravaggio to Matisse, Van Gogh to Pollock, is utterly fascinating and absorbing.

In response to Schulz’s tragic neediness (he says there’s “tragedy in every brush stroke), volcanic insults, and unending pretensions of importance, Odenkirk justifiably unloads his anger back at him, defending himself and the worth of other acclaimed modern artists. Without saying a word, they also are arresting in a 90-second burst of painting – when the two men frantically apply a base burnt red (appearing like dried blood) to a blank 6-foot-by-6-foot canvas, accompanied by the perfectly racing, exhilarating soundtrack of Beethoven’s “Moonlight” Sonata second movement.

Bodenbender is especially good not only at pacing the action and the tension between the two actors, but in choosing the dramatic classical pieces that dot the sonic landscape here (a record player is part of the studio set), including Mozart and Bach.

There are also two haunting references to suicide in “Red,” the cause of death that claimed Rothko’s life Feb. 25, 1970 (at age 66), over a decade after the time period in the play.

Ken and Mark are discussing the influence of the legendary Jackson Pollock, who in 1956 after a day of drinking, ran his speeding Oldsmobile convertible off the road and flipped it, killing Edith Metzger, a young friend of abstract painter Ruth Kligman (who was in the

Schulz, left, as the 20th-century abstract artist and Tristan Odenkirk as his young assistant in “Red.”

front seat), and himself. Kligman was thrown from the car and seriously injured.

In “Red,” Rothko called that “a lazy suicide,” and that when he committed suicide, you’d know it. Late in the play, he and Ken bond after his assistant finds him with fresh red paint on his left arm, which he at first thought was a suicide attempt. Ken (who had heartbreakingly spoke of the death of his parents) gently washes both Rothko’s arms.

Rothko in real life slashed his wrists in his East 69th Street studio, a year after suffering a heart attack, and friends said that he had been despondent in recent months before the suicide.

“Like most American artists of his generation, Mr. Rothko’s early career was marked by struggle and was untouched by recognition,” The New York Times wrote the day after his death.

“Red” is not all dark and foreboding though, as there’s much that is funny and joyful, with bursts of wry, biting humor and Schulz’s extended monologues are always entertaining and insightful.

THAT is why art matters!

Jonathan Turner
Jonathan Turner has been covering the Quad-Cities arts scene for 25 years, first as a reporter with the Dispatch and Rock Island Argus, and then as a reporter with the Quad City Times. Jonathan is also an accomplished actor and musician who has been seen frequently on local theater stages, including the Bucktown Revue and Black Box Theatre.
See More Articles From Jonathan Turner
Tagged: Augustana CollegeAugustana Theatermark rothkoMike SchulzMississippi Bend PlayersQuadCities theaterquadcities theater reviewsRedtristan odenkirk