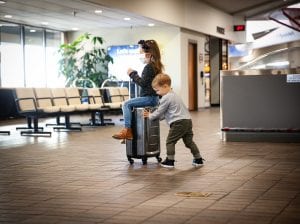 The airport worked to improve health and safety practices in 2020.

Reflecting international devastation of the airline industry, due to Covid-19, Moline’s Quad City International Airport saw a drop of more than half the passengers from 2019 to 2020.

The airport served 306,260 total passengers last year, 58 percent fewer than 2019’s 721,999, the Metropolitan Airport Authority board of commissioners learned at its Tuesday meeting. 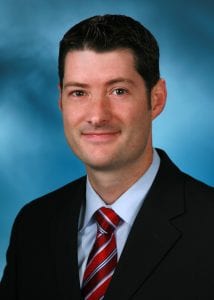 Ben Leischner is executive director of the Q-C Airport in Moline.

“We are optimistic, Denver is scheduled to come back,” Leischner said. “That’s something we’ve been waiting for,” he said of Minneapolis and Denver flights, since travelers typically had to travel east (to Chicago) or south (to Dallas) simply to fly west.

The Moline airport saw 60 percent fewer passengers in December 2020 compared to a year ago, and Delta lost the biggest percentage of passengers for the year – 71 percent, compared to a 62 percent decrease for United, 49 percent for American and 42 for Allegiant.

“I was optimistic that getting over the final hurdle of 2020 would put us in the brighter light of 2021 – however this remains to be seen,” Leischner said Tuesday in his director’s report. “The year has started off with challenges, but we continue to keep hope for a quick and reliable roll-out of vaccines that should spur increased travel as members of our community cautiously return to their previously delayed travel plans.

“The last several weeks have had some challenging weather events, including significant freezing rain, snow and ice, but nothing that couldn’t be handled by our very skilled team members,” he said. “Based on their efforts, I have received numerous reports of appreciation and 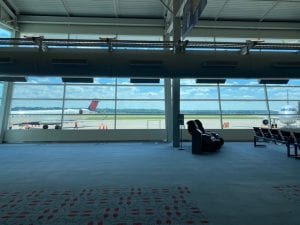 Last summer, the airport launched a new public safety campaign in response to the pandemic.

gratitude from returning passengers – especially to our public safety officers who have been working around the clock to unbury vehicles covered in the ice and snow. A clear benefit of flying from your hometown airport, our employees exhibit a distinct sense of hometown pride in serving our friends and neighbors each day we come to work.”

“Since the onset of the pandemic, staff has been in constant communication with our airline partners, working to ensure that once travel restrictions ease and people are once again comfortable with travel, we are able to offer the services they have come to rely on,” Leischner wrote to the board.

“We recently received exciting news that United Airlines will restore twice-daily service to Denver starting February 11. Passenger bookings were a major factor in recovering this route, so all signs are pointing to a more optimistic outlook for travel in the months ahead,” he said.

“We can now begin serving our passengers once more with not only nonstop service to a fantastic vacation destination but also a major hub to connect them to the western United States and beyond,” Leischner wrote.

Waiting on word from Delta

“While we await news on when nonstop service to Minneapolis and Detroit will return through Delta, we continue to keep in close contact with our airlines to understand their roadmap to recovery and how we can work together,” the airport director said. “Suffice to say it has never been more important to support your hometown airport and fly local – that is our quickest pathway to recovery.”

The total drop in December passengers was more than expected, because of winter storms that impacted flights, she said.

Delta is the only U.S. airline not to sell middle seats, through the end of March.

“Luckily it wasn’t too bad; we had a couple storms come through, that lasted four days,” Johnston said. “As they moved east, it was a little snowball effect, and there may have been connections that were impacted.”

Leischner noted Tuesday that Delta has committed to keeping its middle seats open on flights through the end of March, though that doesn’t impact Moline flights, since those planes have two-seat combos per row. Johnston said Delta has typically limited flights to about two-thirds capacity.

Other airlines have passenger alerts, that if they have flights booked at 75 percent, they let people know if they want to change to less 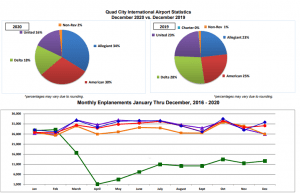 The 2020 figures show differences with last year — the pie chart has blue representing Allegiant, red is American, green is Delta and purple is United. The lower chart shows 2020 passenger figures in green and 2019 in blue.

Delta’s Minneapolis and Detroit flights from here have historically been successful, but the Q-C airport isn’t sure when those will return.

“It can come back in quicker time,” Johnston said. “We don’t always get notifications; with Denver, all of sudden it was on. For Delta, it’s probably not until the beginning of Q2 (in April), based on what we’ve heard.”

Delta nationwide is the only U.S. airline blocking middle seats for flights departing now through March 30, 2021.

As more medical experts agree on the safety of air travel thanks to the multiple layers of protection provided under the Delta CareStandard, blocking seats into spring 2021 provides added confidence and reassurance for customers booking future travel plans, according to the airline.

“Several independent studies have validated the effectiveness of the Delta CareStandard’s multi-layered protection, like advanced ventilation and an extensive cleaning regimen, which together significantly reduce the risk of flight-related transmission,” said Bill Lentsch, Chief

The Quad City International Airport had a rough, bumpy 2020, reflecting the challenges of air travel nationally.

“However, we recognize some customers are still learning to live with this virus and desire extra space for their peace of mind. We are listening and will always take the appropriate steps to ensure our customers have complete confidence in their travel with us.”

U.S. airline passenger volume fell from over 2 million daily at the beginning of March to a bottom of about 90,000 in mid-April, according to TSA checkpoint statistics, as stay-at-home orders and travel restrictions hit. While that number has since recovered, even the busy holiday season saw passenger volume at less than half what it was a year ago, with 1.2 million people traveling on Dec. 27, versus 2.6 million last year.

While it may still be too early to tell what impact Christmas travel had on coronavirus infection rates, experts feared an additional spike, as was recorded after Thanksgiving travel, according to nbcnews.com. Economic recovery for airlines and other in-person industries hinges on a health recovery, and trying to put the latter before the former ultimately risks both.

Airlines received $25 billion in government assistance from the federal CARES Act. It required them to keep employees on payroll. After that funding ran out, airlines were forced to reckon with personnel costs, encouraging early retirement and voluntary leave, negotiating down costs with labor unions, and implementing furloughs and layoffs for the remaining gap. 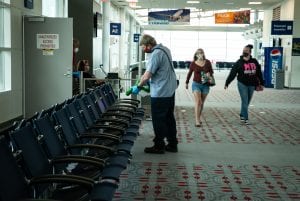 The airport worked to improve health and safety practices in 2020.

The industry got an additional $15 billion in funding in the second coronavirus relief package.

The federal funding will help the Q-C airport pay for a new $1.9-million project to install three new boarding bridges at the terminal, Leischner said. The board approved a contract Tuesday with JBT AeroTech of Ogden, Utah, to install the new bridges.

In July, the airport launched a safety campaign called #WeGoQC that encourages people to plan ahead, wear face coverings, practice social distancing and wash hands frequently or use hand sanitizer. The airport distributed over 3,800 face coverings since June. 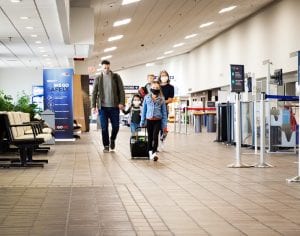 The airport will see nonstop service to Denver return on Feb. 11.

Nationwide, on Dec. 23, 2020 more than 1.1 million people boarded airplanes — the most since March, according to data compiled by the Transportation Security Administration.

TSA data showed that 1,191,123 travelers passed through airport checkpoints nationwide Dec. 23, the most since March 16, when more than 1.2 million people got on planes as the coronavirus was first taking hold in the U.S.

The recent rise in the number of travelers echoes a similar increase around Thanksgiving. The day before that holiday, 1,070,967 people went through TSA checkpoints. It was part of a spike in travel in the seven days leading up to Thanksgiving that sent more than 6.8 million people to airports.

The last Covid relief law includes an extension of the airline industry’s Payroll Support Program, which sets aside $15 billion in assistance to bring back more than 32,000 United and American Airlines employees who were furloughed in September. The companies say the additional funds are enough to pay those workers through March 31.

Still, the Centers for Disease Control boosted its push to keep passengers home in the last holiday season.

“Travel can increase your chance of spreading and getting COVID-19,” it said. “Postponing travel and staying home is the best way to protect 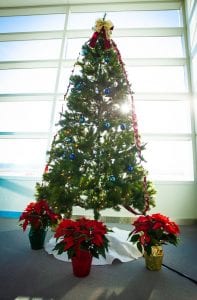 yourself and others from COVID-19.”

The increase in air travel stoked added fears from health experts that there will be another spike in coronavirus infections, similar to a spike recorded after Thanksgiving.

Leischner said in late November that air travel is extremely safe, compared to many indoor activities, regarding Covid risk.

“I would say because some of the research that’s been done and the pandemic has been going on more than half a year, there’s pretty good data on how safe air travel itself really is,” he said.

“Now you look at the positive exchange of air in an aircraft – it’s one of the lower-risk activities somebody could do, traveling in an airplane,” he said.

“Airlines obviously take safety during travel very seriously, so all the major airlines have mask requirements,” Leischner said. “Our airport, you’re required to have a mask on if you’re inside the building. It’s one of those things – safety is paramount, so in the public facility, we’ve invested a lot to make sure the travel experience is as safe as possible.

“That’s one of the benefits of flying out of a smaller airport – there’s a lot more space to spread out,” he said of the Moline airport. “We have a large terminal for the amount of flights now, so there is plenty of space.”

Jonathan Turner
Jonathan Turner has been covering the Quad-Cities arts scene for 25 years, first as a reporter with the Dispatch and Rock Island Argus, and then as a reporter with the Quad City Times. Jonathan is also an accomplished actor and musician who has been seen frequently on local theater stages, including the Bucktown Revue and Black Box Theatre.
See More Articles From Jonathan Turner
Tagged: AmericanDeltaquad city airportquadcities air travelunited airlines