Local artists are being sought by the city of Moline and Renew Moline to create a $10,000 public art display on the Spiegel Building, 200 20th St., just north of River Drive on the ground floor’s boarded windows.

The vacant Spiegel Building is owned by the city, and is one of the few remaining factory buildings in downtown Moline from the industrial era – originally built between 1928 and 1930 as the Eagle Signal Building, according to Renew Moline, a nonprofit organization and public-private partnership. 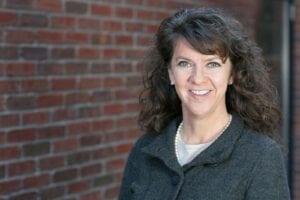 The project intent is “to beautify and draw attention to the building, a city-owned asset and important piece of the historic fabric of downtown,” says a project description at renewmoline.com. It is also the centerpiece in the future of the redevelopment area created by the I-74 bridge project.

“One of the tough things from a developer’s standpoint, the bridge construction is a bit of a hindrance, and the demolition of the old bridge, so a lot of developers have been cautious about proceeding prior to a major demolition thing happening right next to them,” Renew Moline president/CEO Alexandra Elias said this week of redeveloping the Spiegel Building.

“Just the uniqueness of the building makes it attractive to look at,” she said. “There are just not a lot of buildings that are constructed that way anymore.”

Renew Moline proposed the art concept, part of a delayed public-art master plan for the downtown. The I-74 bridge under construction across the Mississippi River.

“It’s super prominently located – I mean, 18,000 cars go by that location every day,” Elias said. “It’s very visible. The other thing, we wanted to raise the visibility of it as a development site. If the city would have an opportunity to engage the public, educating people that this is going to be in the middle of a significant redevelopment area, that’s part of the message.” 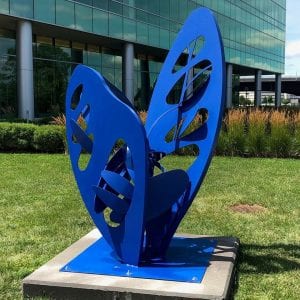 “This is an interesting building; what should be done with it?” she said. “Just raising the visibility of it, public art is an interesting tool to be able to do that. Of course, we’ve seen more recently, we had this idea in February and we’ve talked to our public art steering committee about it.

“Since then, there have been a lot of public art murals that have been used as a public art engagement tool in a very cultural way,” she said of George Lloyd-themed and Black Lives Matter murals nationwide. “The timing of doing a mural right now is very powerful.”

“Our idea really is to highlight the building, its proximity to the new bridge and what an asset this city-owned building is to this area,” Elias said.

“As you’re attracting attention to it, people who are fond of old buildings, who have done historic rehab, or just appreciate the location of the site – with or without the building – will be more inclined to look at it,” she said. “The more we can get the word out, the better off we are.”

The purpose of the Spiegel project is to accomplish three goals:
•   Highlight a city-owned asset and create interest in the building;
•   Beautify the downtown and River Drive experience with public art; and
•   Discourage graffiti on these new surfaces.

In 2018, two developers submitted formal proposals to purchase and renovate the four-story brick structure located off River Drive. The city asked $327,500 for the building and hoped to close on the property by July 31. In January 2016, prior owner Tom Spiegel sold it to Moline for $303,000.

Heart of America Group was one of the proposed developers, and with more than 8,000 square feet per floor, had planned to renovate the building with retail on the first floor, and residential living on the second, third and fourth floors. 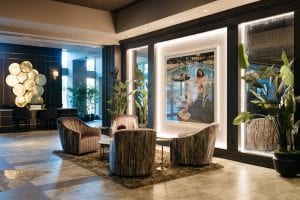 Heart of America – which redeveloped the former warehouse at 1501 River Drive over 20 years ago for its headquarters – said there was potential for the addition of two more floors to maximize river and bridge views, including a rooftop terrace with a lounge area and landscaping.

Elias said this week there were no development proposals currently on the table for Spiegel, and Heart of America devoted significant time and resources completing last fall’s opening of its new Axis Hotel and Fifth Avenue Syndicate Bistro & Bar at 1630 5th Ave., in the historic Fifth Avenue Building.

Since 1989, Renew Moline has facilitated over $400 million of public and private investments that significantly eliminated blight and substantially revitalized Moline Centre, becoming a national model as a place to live, work, and play.

For the Spiegel Building (last used as a warehouse), the proposed art project would cover nine south-facing windows measuring 94-inches-by-83-inches each. Material would be supplied to the artist selected to complete the project. The art would be completed at the artist’s studio and delivered to the property to be installed by city staff, and the artwork would become the property of the city.

Renew has suggested using the nine panels to spell out the word “Possibility!” or another original concept that visually expresses the goals of the project and the potential of the building. 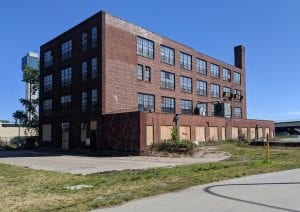 Renew Moline will award $10,000 to the chosen artist, supply the substrate material, and install the art. All other costs including labor, paint and other materials, and transportation to the site will be the responsibility of the artist. Award distribution will be paid at 60 percent upon execution of contract and the rest upon delivery.

Proposals with illustrated concepts are due by Sept. 2, with artist notified and contract executed Sept. 11. Renew expects the project to be completed by Oct. 19.

Elias said Renew would love to see a local artist be featured, but it’s not restricted geographically. “I think our goal is just to get the best possible project for the city,” she said.

Located within the new I-74 River Bridge Crossing Corridor, the building is highly visible to local and interstate traffic. The entire district is part of a multi-year redevelopment plan that has included (and will include in the future) interstate roadway and bridge construction and deconstruction, utility improvements, landscaping and streetscape improvements, additional parking, and other types of related 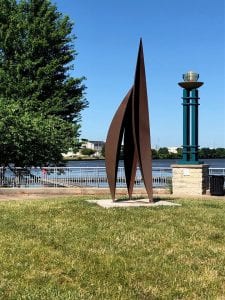 “Swans on the Marsh” by V. Skip Willits on the river walk.

The Spiegel project is part a comprehensive downtown public-art master plan that Renew Moline has proposed. They’re working with the consulting firm Designing Local, based in Columbus, Ohio, which has done public art master plans for cities nationwide, including Atlanta.

“There are possibilities for public art all over downtown and our plan covers all of downtown,” Elias said of Moline.

Designing Local was picked last November by a steering committee of business and community leaders passionate about the value of public art in the community.

Of the firm, committee member Lori Roderick said, “I like that they identify, promote and implement specific, appropriate, fun, education and fact-finding activities and don’t rely on boilerplate interactions.”

This approach is important in engaging the community in the development of Moline’s first public art master plan. The project was funded by the Moline Foundation. 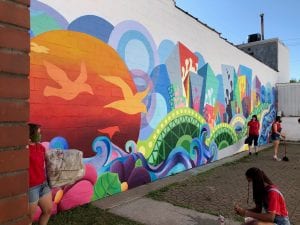 The Downtown Public Art Master Plan will be developed in a public, transparent and collaborative process and will apply to the Moline Centre Plan area and select “special areas” in adjacent neighborhoods. Designing Local will engage the public in the planning process over a period of several months. The final product will be a detailed and illustrative document to be considered for adoption by the Moline City Council.

“As a writer, graphic designer, and a plan publisher, my joy is putting my skills to work for places that want to stand out from the rest and I am so excited to be able to lead this process,” she said. 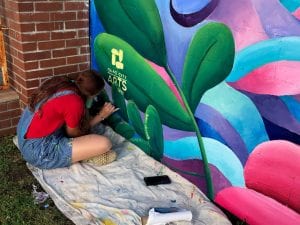 “Literally, two weeks before our first big public engagement session, was when Covid hit, so we were forced to cancel our April 2nd walk-about and talk-about session,” Elias said. “Our goal was to bring anyone who wanted to participate down to downtown Moline and the areas we’ve been looking at, including this one, to see what the public thought about public art.”

She had a series of public activities scheduled, which she hopes to do this fall. “We do think that walking around outside and seeing these public spaces is an important component of deciding what they should look like,” Elias said.

“This is a project we’ve gotten funding from the Moline Foundation for, so we want it to be the best possible,” she said. “While we could do it virtually, that’s a plan B we don’t want to do until we have to.”

Renew got $25,000 from the foundation, matched by the organization, and the Moline Foundation set aside $15,000 for future public art. Elias expects it will be at least six months for compilation of a master plan following the public engagement sessions.

Renew and the foundation supported the new Metro Arts mural done in July at 1516 6th Ave., Moline, and Renew also has supported installation of new public sculpture through Quad City Arts at Kone Centre off 17th Street and the river, and another at 15th Street on the walking path by the river.

Artists for the Spiegel project are asked to submit their concepts, illustrations, a written description of the concept, resume/biography, and examples of previous mural work to aelias@renewmoline.com, or Renew Moline, Inc., Alexandra Elias, CEO/President, 1506 River Drive, Moline, IL 61265.

Jonathan Turner
Jonathan Turner has been covering the Quad-Cities arts scene for 25 years, first as a reporter with the Dispatch and Rock Island Argus, and then as a reporter with the Quad City Times. Jonathan is also an accomplished actor and musician who has been seen frequently on local theater stages, including the Bucktown Revue and Black Box Theatre.
See More Articles From Jonathan Turner
Tagged: designing localkone centerlocal artistsMetro Artsmetro arts muralQuad City Artsquadcities artquadcities artistsquadcities muralsrenew molinespiegel project