Though Illinois allowed indoor museums to reopen June 26, the Covid-19 pandemic still rages across the nation. Museums, historic homes and gardens in the Quad-Cities have taken differing approaches to reopening. 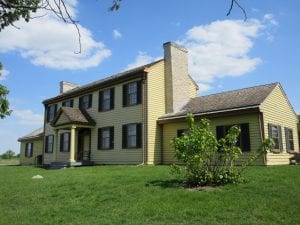 As of that Friday in late June, with phase 4 of Illinois’ reopening implemented, very few museums on the Illinois side of the Mississippi River were open to the public. As of today, most have reopened, with attractions remaining closed include the John Deere Pavilion in Moline and Colonel Davenport House on Arsenal Island.

The American Alliance of Museums (AAM) president and CEO Laura Lott had a grim prediction this week. In a survey released Wednesday of 760 museum directors nationwide, 33 percent of them said there was either a “significant risk” of closing permanently by next fall or that they didn’t know if their institutions would survive. 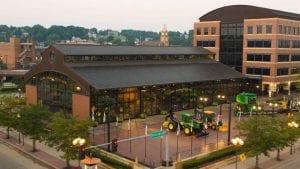 “There’s a large public perception that museums rely on government support, when the reality is they get only a quarter of their funding from the government,” Lott told NPR.

Ticket and gift shop sales, school trips and museum events are primary sources of funding, she said, “most of which went to zero overnight when they were all shuttered.”

The institutions surveyed ranged from aquariums to botanical gardens to science centers. More than 40% of them were history museums, historic houses and historical societies, while art museums represented less than 25%.

“Museums support 726,000 direct and indirect jobs and contribute $50 billion each year to the economy,” AAM said in a statement Wednesday. “Of the museums able to reopen, over 40% plan to do so with reduced staff and will need to spend additional funds to ensure their ability to reopen safely.” 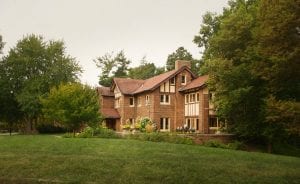 The Hauberg Estate in Rock Island reopened in early July, and has several new rules for events and rentals. They are: 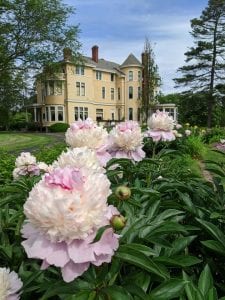 The historic Butterworth and Deere-Wiman homes in Moline reopened on July 12, four days a week, with new rules. Reservations will be required for a set number of people (a maximum of 10 per tour, but may be revised at a later date). Guides and visitors will wear face coverings and sanitize hands as they enter each building; visitors are not allowed to touch historic surfaces.

No group meetings will occur in these spaces this summer, and they will not be using  disinfecting chemicals on historic surfaces.

Since July 16, the John Hauberg Indian Museum, at the Black Hawk State Historic Site in Rock Island, has reopened. Ten people or less are allowed in at one time, with face masks. Donations are encouraged but not required. Weddings and receptions in Watchtower Lodge can be held with 50 people or less.

As of July 1, the Quad City Botanical Center, Rock Island, is open with access to the Sun Garden, The Garden Store and banquet spaces for groups of 50 or less. The Children’s Garden remains closed due to Covid-19 restrictions.

All guests are encouraged to purchase same day tickets online to help the Botanical Center manage the number of guests in the gardens. Everyone is required to wear a mask inside the building and highly encouraged wear a mask outdoors, and to maintain social distance at all times.

The Hobbit House, Events Canopy and Greenhouse are temporarily closed due to inability to properly social distance, according to qcgardens.com.

Impact of closing in Bishop Hill

The popular Swedish heritage of Bishop Hill, in Henry County, was impacted by coronavirus, as nine pre-Civil War buildings maintained by the Bishop Hill Heritage Association (BHHA) were closed for three months. Not only were their two museums closed, the association was deprived of rental income from private events and businesses that operate in its buildings; events were canceled or postponed, and the Colony Store was reduced to online or phone orders, said BHHA administrator Todd DeDecker.

“It definitely had a negative impact,” he said. “For us, during those couple months we were closed, we weren’t taking in any revenue, we’re not taking in donations from our museums.”

The store has reopened seven days a week (employing a part-time manager and clerks), and other buildings are rented to people who have their own businesses – including the carpenter shop, the blacksmith shop, and cobbler shop. The museums – like the Steeple Building Museum – were able to open before phase 4 for free-will donations. 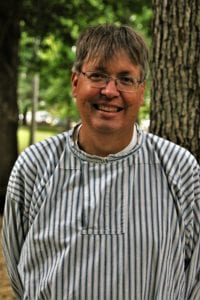 In April and May, they lost revenue from rentals, school field trips and adult bus tours, DeDecker said.

“Then we hit summertime in Bishop Hill and a lot of tourism is driven by our festivals. We have a couple festivals each month up all the way up to December. Of course, right now we can’t do festivals, so we are losing and will lose even more revenue.”

The BHHA has an average annual attendance of 90,000, including events and buildings. Most of the festivals are also free and open to the public, with sales from restaurants and the store.

Since reopening, they ask visitors to wear masks (mandatory in the store) and social distance. The store was able to open at the end of May. They haven’t had nearly the attendance like usual.

To help cover revenue loss, the BHHA got a $3,000 grant from the Illinois Arts Council in June and $2,500 from Illinois Humanities in May, on top of a federal PPP loan to pay employees and utilities.

“We still have the rest of the summer and the fall, and at this time, there’s really no other programs available to us, unless we want to start taking out real loans with interest rates, and stuff like that.” 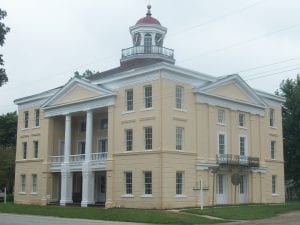 “Smaller museums, most of them are operating on a slimmer margin. They don’t have cash reserves or investments, endowment funds, or anything like that they can tap into.”

“Depending on how long this last, it’ll be harder for them, as things progresses. I think it’s hurting all museums. I just think small museums have, in general, less resources available.”

“If we can’t do our festivals, that’s definitely going to hurt us during the course of this year.”

Depending on public health trends, it may be a long time before Illinois can enter its last phase of reopening, allowing large-group gatherings, he said.

Karpeles in Rock Island one of several nationwide 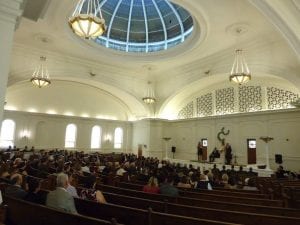 The 700-seat auditorium inside the former Christian Science Church that houses the Karpeles museum.

“I think it’s a little easier for us, because we’re not overly busy. With the way our set-up is, it’s easier for us to maintain that clean, sanitized building in between customers. Those months that we were closed, there were so many missed opportunities. We lost some of our tours; we lost some vacationers that were traveling through.”

The museum is among 14 in the nation (each in a historic building) established by the Karpeles family, who own a million important manuscripts and documents, the largest such collection in the world.

The Rock Island limestone building – on the National Register of Historic Places – features six 2-story columns in front. Its dome actually consists of 2 domes: an outer dome and an inner dome which are separated by a space for lighting fixtures and maintenance. The inner dome is made from 8,000 colored fish-scale glass panes.

The massive building includes a 700-seat auditorium, which has been rented for weddings and meetings, Cain said.

“The Karpeleses are the ones that opened it and help keep us open. It’s their mission to be able to share their vision, the love they have for history, and the documents that we still have today.”

They could have kept all the documents hidden in a vault, she said. 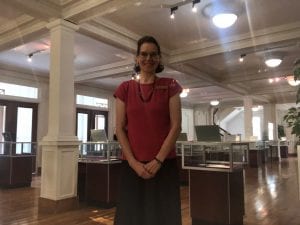 “They wanted other people to enjoy what their family and children enjoyed – being able to see a piece of history in front of them and make history come alive.”

The 14 museums rotate pieces in the collection, so there’s something new on display every four months. They didn’t have to get grants during the closure.

Staff wear a face mask and disinfecting is done between each patron or group, in accordance to the CDC and policies set by the state of Illinois.

The current exhibit is on evolution pioneer Charles Darwin (1809-1882), including letters written by him and to him, Cain said.

“A lot of times when you read a history book, you don’t get a close personal picture of the person. When you read letters and the types of documents this museum rotates in and out, you see a whole different picture of a person, and that’s the neat thing, I think, about this museum.”

The Col. Davenport House on the north end of Arsenal Island has not reopened this year, since its typical opening is May 1. The island in the river, between Rock Island and Davenport, is used by the Rock Island Arsenal, a U.S. Army installation, and anyone who doesn’t have official Arsenal business is currently allowed on the island, said Jessica Waytenick, board member for the Colonel Davenport Historical Foundation.

“The Arsenal is taking a more cautious approach to reopening, so we will be following their rules and guidelines for reopening.” 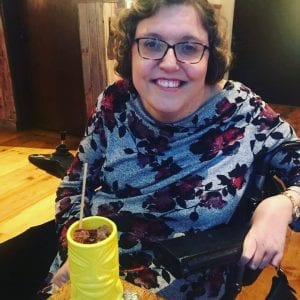 George Davenport — a settler, fur trader, and Army mediator between Native Americans and the U.S. government – built the house in 1833-34, and was murdered there by thieves July 4, 1845, who were looking for money. The city of Davenport was named after him.

After the Civil War, the house deteriorated and fell to the ravages of local souvenir hunters and vandals. In 1907, restoration began and the east and west wings were razed due to disrepair. In 1998, the Colonel Davenport Historical Foundation raised funds and restored the roof, siding, windows, front porch and west wing. In 2011, the foundation started work on the east wing, done in 2015, with new exhibits completed in 2018.

The house saw close to 2,000 admissions and additional tours in 2019, and the CDHF does outreach programs and talks at libraries and civic groups. The annual Pioneer Days festival on the grounds was started in 2013, held in mid-June, and was canceled due to Covid, as was a special Mother’s Day tea at Quarters One on the Arsenal.

Waytenick said the foundation is struggling, since it still has expenses with no revenue. Normally, the Col. Davenport House admission is $6 for adults, $4 for seniors (65+), and free for kids 12 and under, and active military.

Some museums and the zoo, on the Illinois side of the river, were allowed to open June 26, but the house is not, waiting to see what the Arsenal is planning. The Rock Island Arsenal Museum also is closed on the island, Waytenick said. Summer months are usually higher in attendance for the Davenport house.

“We’re looking forward to reopening when we can. We understand the situation, obviously, and the health and safety of everyone is what’s most important.”

This story was produced in partnership with the Pulitzer Center. For more stories about the effect of Covid-19 on museums, please visit the Prairie State Museums Project at PrairieStateMuseumsProject.org.

Jonathan Turner
Jonathan Turner has been covering the Quad-Cities arts scene for 25 years, first as a reporter with the Dispatch and Rock Island Argus, and then as a reporter with the Quad City Times. Jonathan is also an accomplished actor and musician who has been seen frequently on local theater stages, including the Bucktown Revue and Black Box Theatre.
See More Articles From Jonathan Turner
Tagged: Bishop HillHauberg Civic Centerillinois arts counciljessica waytenickJohn Deere PavilionKarpeles Museumlocal events canceled due to coronaviruslocal museumsmargie cainprairie state museums projectpulitzer centerQuarters Onerock island arsenal museumsteeple buildingtodd dedecker