On Saturday, August 17, 2019, at 7:30 pm Quad City Bank & Trust (QCB&T) Riverfront Pops will rock the Quad Cities with a killer setlist of Queen’s greatest hits!  Due to the extensive damage sustained by LeClaire Park during this spring’s historic flood and subsequent flood recovery efforts, the event has been moved to the Rock Island Arsenal.

“In the aftermath of our historic flooding this year, the Rock Island Arsenal has stepped up in a big way to serve as the venue for Riverfront Pops and we are so grateful for their willing support as hosts,” said QCSO Executive Director Brian Baxter. “The Arsenal site is stunningly beautiful complete with a fantastic river view and will preserve the Riverfront Pops experience as ‘the party of the summer’ on the river in the Quad Cities.” 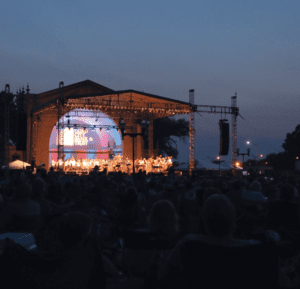 Attendees are still welcome to bring in their own food and beverage, and several vendors will be on-site to offer a wide range of dining and entertainment options. Access to the Island will be open to the public for the event, and visitors age 16 and older will simply need to show a valid, state-issued ID at the Rock Island or Moline gates to enter the island. Directional signage will get you to the event parking areas. Additional event details will be announced at a later date on QCSO.org.

This year’s tribute includes Queen’s most memorable hits including Another One Bites the Dust, Under Pressure, Killer Queen, Crazy Little Thing Called Love, Somebody to Love, Bohemian Rhapsody, and more! The evening will close with the traditional rousing renditions of Pyotr Ilyich Tchaikovsky’s 1812 Overture and John Philip Sousa’s Stars and Stripes Forever set to a brilliant fireworks display.

Tony Vincent will sing the classic rock favorites made iconic by Freddie Mercury’s astounding vocal range. Best known for his appearance on NBC’s The Voice, Vincent is a music theatre veteran having performed the original lead roles in Queen’s jukebox Musical We Will Rock You (in both the London and Las Vegas productions), and Green Day’s American Idiot.  Vincent was also chosen to perform “Bohemian Rhapsody” with Queen for the band’s June 2002 appearance at Party at the Palace, a celebration of Queen Elizabeth’s 50th anniversary as monarch.

Tess Abney
Tess Abney was born and raised in the Quad Cities. Her passion for writing and entertainment was apparent at a very young age. Whether it is sharing local events and businesses with readers or sharing her thoughts on life, she finds comfort in the way words can bring people together.
See More Articles From Tess Abney
Tagged: Eventslive musicQCSOQuad CitiesQuad City Symphony OrchestraQueenRiverfront PopsRock Island ArsenalThings To Do