Davenport’s Putnam Museum And Science Center Fundraiser Brings in Over $26,000

“I am THRILLED with the success of the event,” Nisha Ladlee, the Putnam’s vice president of development, said Monday by e-mail. “Everyone really seemed to enjoy themselves. Eric Sorenson was a phenomenal emcee and Emily Calandrelli was wonderful as our celebrity 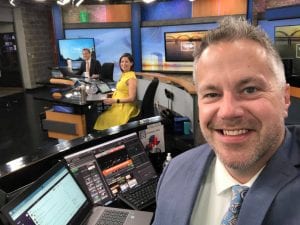 Meteorologist Eric Sorensen on the set at WQAD-TV.

guest. This was the Putnam’s first time holding a virtual fundraiser and we are grateful for the support from our community locally, but also to those who tuned in and supported from different parts of the country.

“We had guests from California, New Jersey, and Colorado, as well as Illinois and Iowa,” Ladlee said. “We still have some donations coming, which is fantastic. We also are grateful to our sponsors, Iowa American Water, Nestle Purina PetCare Co., and Victory Stores for their support.”

Emcee Eric Sorensen, WQAD-TV meteorologist, and aerospace engineer and TV host Emily Calandrelli, both were inspiring during the Zoom fundraiser – exhorting the need for young people to get excited about science, technology, engineering and math (STEM) – to help build a better world and protect the one we have.

Calandrelli, 33, who earned her master’s at MIT, is host and co-executive producer of “Emily’s Wonder Lab” on Netflix, She’s featured as a correspondent on Netflix’s Bill Nye Saves the World and an executive producer and host of FOX’s Xploration Outer Space, which airs in 100 million households each week.

Her first science children’s book series, the “Ada Lace Adventures,” are now available for purchase. Calandrelli recently launched the third Ada Lace book into space as part of the Storytime From Space program.

Among the Putnam’s virtual Q & A Saturday, Sorensen asked her what we can do as parents to encourage kids to pursue STEM. 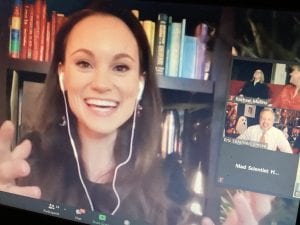 “Introducing your kids to people who are similar to them,” Calandrelli said. “I have a friend who graduated with me from MIT who has a physics channel on YouTube. She’s the Physics Girl. Or it could be someone from their state. We all relate to things that are similar to us.”

“All of a sudden, all the things they’re talking about feels a little easier to understand,” she said. “For me, that means making a lot of content where girls can finally see someone that looks like them, talking about this stuff. I have a book series, the Ada Lace Adventures, with this little girl who loves science and technology and she goes on adventures…It’s like a nerdier version of Nancy Drew.”

“I think it just re-wires their brain with different types of stereotypes they would imagine when they think of the word scientist or engineer,” Calandrelli said. “That helps them imagine themselves in those careers later on.”

At West Virginia University, she was among just a few women among 50 guys in her engineering classes, where she earned a bachelor’s in mechanical and aerospace engineering.

Calandrelli said she studied aerospace engineering mostly because she wanted to fly in a NASA plane called “The Vomit Comet” – reduced-gravity aircraft that astronauts train on, simulating weightlessness by making roller-coaster-like maneuvers in the air. She didn’t know 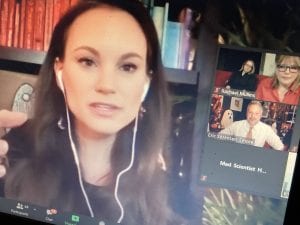 Calandrelli is a TV host and aerospace engineer known as “The Space Gal.”

anyone who did engineering, but she wanted a good job that made money.

Calandrelli thought she might hate the studying part of it, but she loved it.

Sorensen asked why we as a nation need to continue to go to space, 48 years after our last landing on the moon.

“The most exciting stuff that’s in space is the technology that looks back down on earth, to try and understand how this planet is changing,” she said. “That allows us to anticipate when natural disasters like forest fires or hurricanes are going to happen, and be able to track the damage that happens when we do have these natural disasters. And be able to make sure people who need the help the quickest  get the help that they need.”

“There are sensors that can see through smoke to see where the wildfire is moving,” Calandrelli said. “That’s for me, really the big reason for me why space technology is important.” 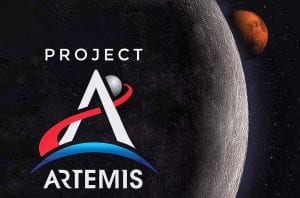 NASA plans to land the first woman on the moon by 2024 with Project Artemis.

to the moon,” she said of the plan to land by 2024. “I’m excited to see that representation, since only 11 percent of people who’ve ever gone to space have been women, which is not a very high percentage.

“So being able to increase that, especially on the stage of the moon, I think that’s gonna be really exciting,” Calandrelli said. “Other than that, I’m really excited for space tourism – companies like Virgin Galactic, who are gonna be flying people who can afford a ticket. More people from more places around the world into space. I think’s going to change the world a little bit.

“When people go to space, they talk about experiencing something called the overview effect, and that is the cognitive shift in perspective in how you think about our planet and the humans on this planet,” she said. “When they come back from space, they want to be a better neighbor to each other; they want to be a better steward of the environment.

“They talk about these beautiful stories,” Calandrelli said. “Those stories are from a limited perspective – mostly male, mostly white, mostly American, mostly scientists and engineers. So, imagine how the world would change if we could send more people with more diverse backgrounds, to come back and tell these stories – or poems or songs or art. What policies they might have? What education bills they might pass?”

“The world would change for the better, if we had more people experience that view,” she said. “Realize that we’re on a very fragile spaceship together in this kind of dark, scary void of space. We need to stick together and we need to look out for each other and look out for our 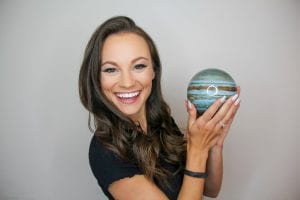 As a TV host and social media star (known as “The Space Gal”), Calandrelli also is a strong supporter of STEAM, integrating the arts into STEM.

“Science and technology don’t exist in this little silo that doesn’t interface with business or economics or policy or arts, or anything like that,” she said. “Anytime you can combine it with one of those, you can bring more people to the world of science and technology. You can find people who are more inclined to be excited to be part of art or business, and when you can interface science with it, all the better.”

“You are in front of the camera,” Calandrelli told him. “You are presenting these things to an audience. That takes public speaking skills; you have to develop a little bit of comedy and personality and entertaining. These are all skill sets that are valuable, because they help people digest very important information that you want them to understand.”

Another question asked her what are the hardest and most satisfying parts of her job.

“I am not someone who is a naturally brave explorer,” Calandrelli said. “In the last few years, I’ve gone scuba diving down 60 feet underwater, to this underwater habitat astronauts go into to train for their missions in space. I had a panic attack before doing that.”

“I skydived, and that was a terrifying experience, because I wanted to show people on my Saturday morning show, Xploration Outer Space, how you could bring a payload safely down to the ground with a parachute from another planet, by parachuting myself down. I’m going to fly in an F-16 soon. That sounds exciting and terrifying.”

“The part of my job that is very cool, but for me causes a lot of anxiety, are these types of things,” she said. “The most rewarding is probably when I get to see the people who watch my stuff.” 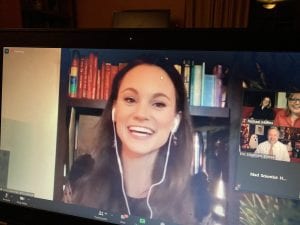 “That’s exactly what I was hoping would happen when the show came out,” Calandrelli said.

Another person asked how she deals with people who don’t believe in the science of climate change.

In West Virginia, it goes back to their relationship with the coal industry, which is so powerful, she said. They’ve brought lessons about coal into the classroom, and trade organizations run a lot of ads.

“A lot of us in West Virginia, I don’t want to go as far as to say are brainwashed into believing if you’re not a friend of coal, then you’re not a friend of West Virginia,” Calandrelli said. “These environmentally friendly policies aren’t very friendly to them. It’s a very emotional and prideful issue. People are caring for their families, they’re losing their jobs. There’s a lot of issues at play.”

“For me talking about climate change, I try to make sure I’m very empathetic about it,” she said. “I try and understand the reasoning behind why they don’t believe in it in the first place.”

Sorensen noted five of our worst floods in the Quad-Cities have happened since the flood of 1993, with the biggest ever last year, as climate change has accelerated and strengthened severe weather events worldwide.

The Putnam’s re-imagined weather and science of art galleries in the Science Center are now open Saturdays and Sundays from 10 a.m. to 5 p.m. Playing a laser harp, creating a cloud, and discovering the power of 230,000 volts probably isn’t your typical day, but you can try them in the center.

The Putnam Science Center is part of the museum’s focus on STEM education, and supports national and statewide efforts to increase STEM skills. Using existing museum space, the center spans more than 10,000 square feet and features more than 45 hands-on stations.

Jonathan Turner
Jonathan Turner has been covering the Quad-Cities arts scene for 25 years, first as a reporter with the Dispatch and Rock Island Argus, and then as a reporter with the Quad City Times. Jonathan is also an accomplished actor and musician who has been seen frequently on local theater stages, including the Bucktown Revue and Black Box Theatre.
See More Articles From Jonathan Turner
Tagged: emily calandrelliemily's wonder labfundraiserskids activitiesPutnam Museumputnam museum and science centerquadcities museumsstem educationxploration outer space