For Western Illinois University art professor Bruce Walters of Davenport, a 37-year career teaching in higher education has been accentuated by the personal artwork he’s created, in a wide variety of media. 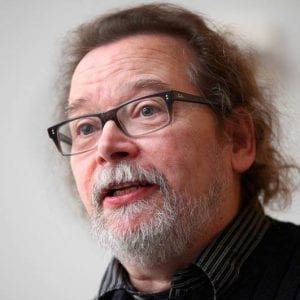 Artist Bruce Walters of Davenport will retire in May after a 37-year career teaching in higher education.

As he prepares to retire from teaching in May, an exhibit of part of his inspired work — titled “What the Hand Dare Seize the Fire?” — is on display at the University Art Gallery in Macomb through April 2. The title of the current exhibit is taken from a 227-year-old poem, “The Tyger,” by William Blake.

“The first drawings in this exhibition are drawn from the poem’s first stanzas,” Walters (who has shown in 100-plus exhibitions across the country) said in a WIU release this week.

“Where the poem follows with a series of questions on the nature of God, I shifted my attention to ‘who’ seized the fire.’ I answer first with Prometheus, who dared to seize the fire from the gods of Olympus,” he said. “Science and technology are the progeny of this gift to humanity.”

The WIU show includes 20 graphite drawings Walters created over the past 20-30 years, including a life-sized military tank, portraits of people he’s interacted with over the years, and interpretations of his love of Halloween and of “the unknown.” 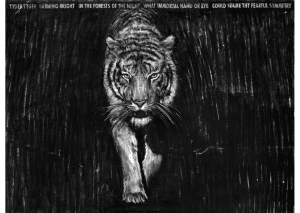 A graphite drawing of a tiger created by Bruce Walters, who has taught at WIU for 24 years.

them side-by-side for the first time,” he said. “These are the drawings of astronauts, pilots and machines of war. I conclude with drawings of artists and musicians who carry the fire — passing the torch of inspiration and creativity forward. Yet, I feel that the true subject of this exhibition is mystery. The unknown — just beyond our reach.”

Walters has taught in the classrooms of WIU for 24 years, previously teaching at Augustana College, Rock Island, and Marycrest College, Davenport. At WIU, he primarily teaches graphic design courses.

A good portion of the Art Gallery’s exhibit space is taken up by Walters’ life-size drawing of a military tank, portrayed on eight panels. He said the idea garnered him some strange looks when he went to a military installation, asking for permission to measure a tank, the WIU release says.

Walters gathers inspiration from things he sees, then photographs. Many of his adventures in photography have come during his driving time between Macomb and the Quad-Cities to teach art classes.

This is Walters’ third show at the WIU Art Gallery. The two previous exhibitions included animations, digital artworks, design work, paintings, photographs and large projections, including those of flying bats that were projected onto the gallery’s exterior walls near Halloween from the windows of surrounding buildings.

Several of the works in this exhibition appear, upon first glance, to be drawings of places and people, but when listening to Walters explain 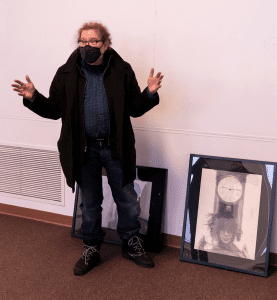 Walters setting up his artwork at the WIU Art Gallery in Macomb.

his motivation for each one, the eye can see the drawings differently. For example, one of the pieces is a drawing of horses on a carousel. When talking about the piece, Walters said all of the horses are facing the same direction as if they are pointed toward the distant horizon.

“I did some reading about carousels because I find them creepy…like the horses are in a panic and have fierce expressions,” he said.

Even though Walters is retiring from teaching, he is excited where his free time will take him as an artist.

“I have so much more to say,” he said. “I have some very ambitious ideas. I have enjoyed teaching because it’s a privilege to be around young people and to try to inspire them.”

One project Walters is working on is a book about all of the sculptures placed around the Q-C area. He has researched all of the pieces and interviewed some of the artists to compile about 100 articles about the work.

You can see a video display of Walters’ work HERE. For more information about the WIU Art Gallery, visit wiu.edu/artgallery.

Jonathan Turner
Jonathan Turner has been covering the Quad-Cities arts scene for 25 years, first as a reporter with the Dispatch and Rock Island Argus, and then as a reporter with the Quad City Times. Jonathan is also an accomplished actor and musician who has been seen frequently on local theater stages, including the Bucktown Revue and Black Box Theatre.
See More Articles From Jonathan Turner
Tagged: bruce walterslocal art gallerieslocal artistsquadcities artistsWestern Illinois UniversityWIU