Home › Articles › Theatre › After Long Period with No Musicals, “Company” is Coming to Moline’s Black Box

After Long Period with No Musicals, “Company” is Coming to Moline’s Black Box

Marry me a little,
Love me just enough.
Cry, but not too often,
Play, but not too rough.
Keep a tender distance
so we’ll both be free.
That’s the way it ought to be.
I’m ready! 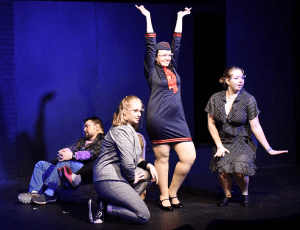 Robert — an eternal bachelor and the sun around which the frantic, neurotic planets orbit in the landmark musical “Company” — specialized in social distancing long before it was fashionable (and recommended).

For its first musical in 26 months, the great “Company” is coming to the Black Box Theatre, 1623 5th Ave., Moline, opening Thursday night with its biggest cast (by far) in about the same period of time, a talent-packed 14 performers. 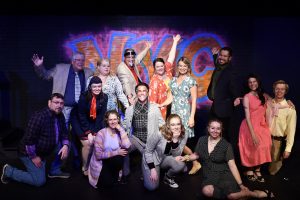 setting 14 Tony Awards, and won six. Among its standout songs are “Being Alive,” “The Ladies Who Lunch” and “Another Hundred People.”

The story revolves around Robert (a single man unable to commit fully to a steady relationship, let alone marriage), the five married couples who are his best friends, and his three girlfriends. Unlike most book musicals, which follow a clearly delineated plot, “Company” is a concept musical composed of short vignettes, presented in no particular chronological order, linked by a celebration for Robert’s 35th birthday.

Company was among the first musicals to deal with adult themes and relationships. As Sondheim put it, “Broadway theater has been for many years supported by upper-middle-class people with upper-middle-class problems. These people really want to escape that world when they go to the theatre, and then here we are with Company talking about how we’re going to bring it right back in their faces.”

In Moline, the show was originally supposed to be performed in October 2020, and four of the original cast are part of the new one – including Tommy Ratkiewicz-Stierwalt as Bobby. Since spring 2020, BBT has focused on very small-cast, non-musical plays, including radio-style productions at the 60-seat, three-row venue.

Miller had auditions again for “Company” over this summer, and started rehearsals in late August, putting it together in just five and a half weeks.

“The cast is amazing; they’re working really hard,” he said recently. “It’s Sondheim, it’s not easy. It’s a lot of work, they know, but this is the first show we’ve actually offered a stipend for actors.”

The theater got a grant from the Moline Foundation to help pay for the rights and the salaries, Miller said. “It really helped us as a nonprofit, to try and stay afloat through Covid. We worked really hard, Lora and I, to squirrel every penny we’d get and keep the doors open. And we’ve managed to do it.”

Miller is also putting a plot twist in the end of the show, regarding Bobby. He played the role himself in a late ‘90s production in San Diego. “We’re bringing it up to date a little bit,” he said, compared to its 1970 origin. “I’m pretty excited.” 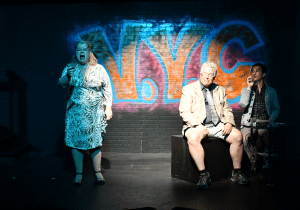 This version (as most do in the past 25 years) includes the Act 1 closer, “Marry Me a Little,” which Bobby sings about his ambivalence toward (yet embrace of) marriage, and which was cut from the original Broadway version. In the 1990s, “Marry Me a Little” was restored permanently to close Act I and added to the 1995 and 2006 revivals.

“I love it,” Miller said. “In the libretto, when you buy the rights, you have the option not to do it. It’s a great number.”

Tommy Ratkiewicz-Stierwalt said it was a challenge for the cast to rehearse in masks (required by the state of Illinois for indoor public spaces); they will do performances in clear face shields (audiences are required to wear masks).

“This show, because it is very vocally demanding, having to wear masks has been difficult,” he said. “When you take a breath, you suck the mask in, and that’s why a lot of us like the shields better, because we don’t have that breathing barrier. It’s been an adjustment, as everything has over the last year. But it’s definitely been worth it.”

Tommy performed in “Legally Blonde: The Musical” in Muscatine (playing Emmett) just before the pandemic, in February 2020. This past

summer, he directed “The Music Man” at Countryside Community Theatre in Eldridge.

He likes the direction that Miller has taken “Company,” but doesn’t want to give away the ending. “It’s helped me connect with the character,” Tommy said. “It helps my process.”

In the show, the other characters are more voices in Bobby’s head, but his real friends. “They’re kind of his thought processes,” Tommy said. “They resonate with Bobby as the show goes along. With ‘Side by Side,’ Bobby starts to realize how couples’ relationships are going and that’s maybe why Bobby’s haven’t gone so well or come to fruition really.”

He said he learned very quickly – after playing the Balladeer and Lee Harvey Oswald in “Assassins” – to come to the first rehearsal prepared. “All of us came in very prepared, because we know the challenge that Sondheim is and all of us know, we want to do it justice. So those of us that have worked his scores before, we come in prepared, hit the ground running and go from there.”

The cast got their books a couple weeks before rehearsals started. “I started memorizing and going through lines,” Tommy said of his part. 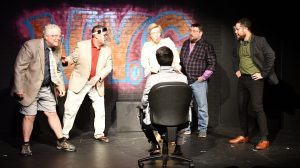 “Everybody has just about the same amount of work as everybody else.”

The biggest challenge for him was the scene he has with April and Joanne, with a couple lengthy monologues. “They almost come one right after another too,” he said.

A difficult musical number for Tommy is “Marry Me a Little.” He said: “It kind of flies, and if I don’t get the words out…That’s the most challenging one, and that’s the one I started with.”

“Being Alive,” the famous dramatic song toward the end, shows Bobby’s willingness to commit and find a partner – “to find the missing puzzle piece,” Tommy said. “I wish I could say more, but I can’t.”

He really missed not doing theater during Covid, especially since Tommy and his husband Troy (a realtor) both work from home and it was an adjustment.

“I missed meeting new people and creating something for people to have that escape, with everything that’s going on,” said Tommy, who’s a claims processor for United Healthcare. “It’s so collaborative. And now to be back in full swing, with ‘Music Man’ and ‘Company,’ it’s been nice.”

He also loved seeing friends in other shows this past summer. “Seeing everybody get back into the swing of things – live theater, everybody having fun,” Tommy said. “I think it really helped audiences connect and help people celebrate being back. Like Broadway’s back – the celebration of having live events back. It was just exhilarating, it was so fun.”

Now 32, he and Troy have been married for five years. Of the current company, Mark Ruebling, Jenny Winn and Wendy Czekalski were in the former District Theatre version of “Company” in 2012. Randin Letendre is again music director (as she was for “Assassins”), with a small pit.

Winn is again playing Amy, who sings the blazingly rapid-fire “Not Getting Married Today,” and the part also came back pretty quickly for her, after nine years.

“I think it’s in there; when you’ve played a role, it’s far back in your memory,” Winn said. “I’m sure it will be different than the first time I 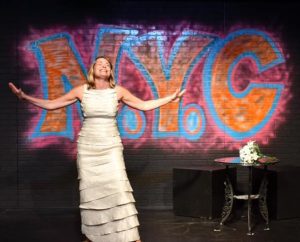 played her, because I’m different.”

She really likes the Black Box space and the way Miller has staged it. Winn just was in the four-person drama-thriller, “Murder in Green Meadows” at BBT (in August), and previously had played Mary in “It’s a Wonderful Life: A Radio Play” for the 60-seat venue.

Her last pre-Covid musical was succeeding Shelley Walljasper in Circa ‘21’s “Grumpy Old Men,” in spring 2019 (for about 4-5 weeks). Winn also was the female lead in Circa’s “Bridges of Madison County” in spring 2018, and has played many leads at Music Guild in Moline.

It’s been great, though a little strange, to return to musicals while the pandemic still isn’t over, she said.

“I think it’s an adjustment, even to be socializing with people,” Winn said. “We’ve worn masks throughout the whole process, and we’ll wear shields instead for the performance, and the audience will be fully masked. I feel really good about the precautions that the Black Box has taken, because we’re all vaccinated, and we’re keeping each other safe throughout the process. But it is different. Theater is going to be a different world after Covid.

“But it does feel really nice to be able to be on stage again,” she said. Of the BBT, Winn added: “I love working here; they’re super flexible.”

The show has been in the news the past couple years since a Broadway transfer of the 2018 West End revival was originally slated to open March 22, 2020, coinciding with Sondheim’s 90th birthday. The production began previews at the Bernard B. Jacobs Theatre on March 2, but after nine preview performances, was suspended (along with all other Broadway shows) due to the coronavirus pandemic.

Patti LuPone will reprise her role as Joanne, with Katrina Lenk as the gender-reversed role of Bobbi.

By the end of “Company,” Bobbi (Bobby) passionately declares the dedication to finding that special someone in the anthemic, moving “Being Alive”:

Somebody, hold me too close,
Somebody, hurt me too deep,
Somebody, sit in my chair
And ruin my sleep
And make me aware
Of being alive,
Being alive.

Somebody, need me too much,
Somebody, know me too well,
Somebody, pull me up short
And put me through hell
And give me support
For being alive,
Make me alive.

Make me confused,
Mock me with praise,
Let me be used,
Vary my days.
But alone is alone, not alive.