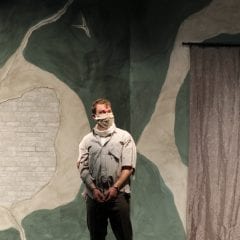 St. Ambrose University senior Tyler Hughes made his full-length directing debut in the middle of a global pandemic, with another tense story of international crisis. “Two Rooms” by Lee Blessing – a love story of Lainie and Michael, married American educators working in Lebanon during the mid-1980s – features four student actors and was filmed earlier this month, to be streamed this weekend. After Michael is kidnapped by terrorists, Lainie returns to the United States to seek out help from her government to have Michael rescued, only to be stonewalled by the American policy that states:... Read More