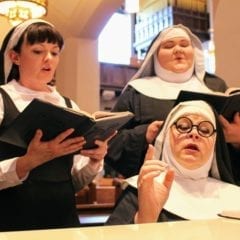 The singing sisters are back! Quad City Music Guild will be presenting “Sister Act”  Aug. 9-11 and 15-18 at the Prospect Park Theater in Moline. Reserve your seats today by visiting qcmusicguild.com; or by calling the box office at 309-762-6610.  Read More

Antoinette Holman has always been a star, she just needed a vehicle to show it, and I can’t think of a better way for her to debut than as the lead of Circa’s new “Sister Act.” With its combination of sass, singing and humor, Holman is perfect for the part, and it’s her brilliant talent that’s the biggest factor in leading the show to such a triumph. It’s not just Holman that highlights the show. It’s a terrific production in many ways I’ll get into shortly. But when you’ve got to cast a character that is in almost every scene, in a musical in which she sings the majority of... Read More

Heavenly humor and music shines on Circa with ‘Sister Act’

Heavenly humor and music is going to be shining down on the congregation of Circa ’21 Dinner Theater this summer as the Rock Island venue opens up its pearly gates to “Sister Act.” The Broadway musical-comedy smash hit opens May 6 and runs through July 2. Based on 1992’s wildly popular film comedy starring Whoopi Goldberg, and nominated for five 2011 Tony Awards including  Best Musical, this hilarious, endearing, and high-energy production will have you riding a wave of pure musical-comedy exhilaration, and is being brought to life by a magnificent cast of professional talents. “Sister... Read More

Circa ’21 offering a full slate of shows and concerts 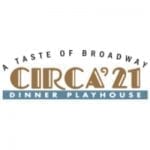 There’s a lot happening at Rock Island’s Circa ’21 Dinner Theater over the next few months! The venerable institution is bringing in a huge array of shows, showcases and concerts for a variety of audiences. Here’s the rundown: Mainstage Shows: SHEAR MADNESS – Through April 30: Audiences are loving this absolutely hilarious comedy which is the longest running comedy in U.S. history. SISTER ACT (Quad City Premiere) May 4 – July 2: The hit 1992 movie starring Whoopi Goldberg comes to the Circa ’21 stage. MENOPAUSE THE MUSICAL – July 6 – August 27: A musical celebration... Read More