‘Children of Eden’ Moved This Reviewer To Tears 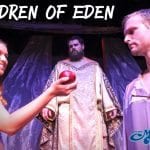 Just uphill from a friendly little pond at Prospect Park in Moline, IL, lies an auditorium which is home to the Quad City Music Guild. As I arrived on the scene, I duly noted that the crowd gathering was a bit more distinguished and the staff was both friendly and professional. I made my way to my seat readied my writing utensils for what may come. Having known nothing of the play, I was unusually eager. “Children of Eden” is a play written originally played on stage at a religious high school. In ACT I, it tells both the stories of Adam and Eve and then Cain and Abel. In Act II, the story... Read More