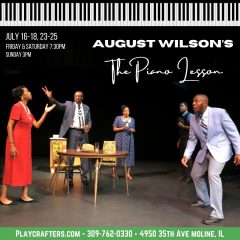 I wanted to like the African-American drama “The Piano Lesson” at Playcrafters Barn Theatre much more than I did. It truly has all the ingredients to make something special, but Saturday night’s version appeared undercooked and not quite ready to serve as a fully satisfying meal. The Pulitzer Prize-winning play by August Wilson (1945-2005), who died of liver cancer at age 60, is part of the playwright’s epic “American Century Cycle” that documents the Black experience. Each of the 10 works reflects a different decade of the 20th century, and “The Piano Lesson” is set in 1936, as... Read More