I wanted to like the African-American drama “The Piano Lesson” at Playcrafters Barn Theatre much more than I did. It truly has all the ingredients to make something special, but Saturday night’s version appeared undercooked and not quite ready to serve as a fully satisfying meal. 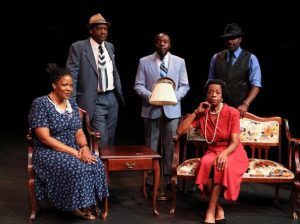 The Pulitzer Prize-winning play by August Wilson (1945-2005), who died of liver cancer at age 60, is part of the playwright’s epic “American Century Cycle” that documents the Black experience. Each of the 10 works reflects a different decade of the 20th century, and “The Piano Lesson” is set in 1936, as Boy Willie (Dante Turner) arrives in Pittsburgh from the South with his friend Lymon (Ashley Harris) in a truck loaded with watermelons to sell. He has an opportunity to buy some land down home, but he has to come up with the money quick.

He wants to sell an old piano that has been in his family for generations, but he shares ownership with his sister Berniece (Alisha Hanes) and it sits in her living room, in the home of 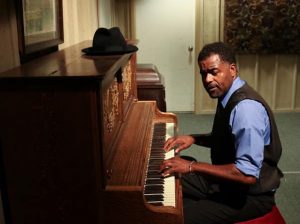 Antonio Stone at the piano at Playcrafters.

her uncle Doaker (Fred Harris, Jr.). She has already rejected offers because the antique piano is covered with incredible, priceless carvings detailing the family’s rise from slavery. Boy Willie tries to persuade his stubborn sister that the past is past, but she is more formidable than he anticipated.

Wilson’s remarkable achievement is a three-hour meditation, and a mountain of a play – brimming at times with humor, music, tension, emotional grappling with family legacies, looking for love, identity crises, overcoming slavery, discrimination, faith, and literal confronting of ghosts. Playcrafters’ version – helmed by first-time director Kermit Thomas (who notes in the program it’s a dream and the job of a lifetime) is anchored by theater veteran Fred Harris, Jr., who plays Doaker. His commanding, world-weary presence is a constant delight and we sympathize with his awkward 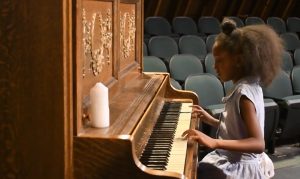 Kennedi Durant plays Maretha in “The Piano Lesson” at Playcrafters.

predicament, placed between the titanic argument of his niece and nephew.

In a recent Facebook post, Harris said his favorite thing about Doaker is his wisdom and humor. “He is the bridge and oldest member of the characters. His attitude and presence takes me back to my youth,” Harris recalled. “Often sitting around when the men of the neighborhood got together to talk about their wants and dreams. Hardworking men with a purpose for living.”

His own long legacy at Playcrafters since 1993 includes acting in “The Boys Next Door,” “Strangers on a Train,” “Fences,” and “Rounding Third,” directing “Raisin in The Sun,” “Blues for an Alabama Sky,” “Dinner with Friends,” and “Woman Called Truth,” and producing “A Lesson Before Dying.”

So Harris is almost single-handedly responsible for bringing important stories featuring characters of color to the 64 stage. He noted “The Piano Lesson” tells the “story of legacy and how important it was to Black families of that era. It’s the story of perseverance and love. It reveals with brevity the life struggles of the time. Plus it’s been a long year off so come out and enter another world.” 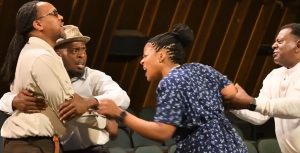 Fred Harris, Jr. (right) tries to restrain Alisha Hanes as she lashes out at Dante Turner and Ashley Harris in “The Piano Lesson.”

Harris is one of just two actors in the eight-person cast who was originally cast by Thomas in 2020, when the Covid shutdown forced the postponement of the play. The other is Renaud Haymon, who plays the preacher Avery (and wants to marry Berniece). Haymon has a laid-back, likable air, and he brings over 20 years acting experience to the part, including Playcrafters productions of “Fences,” “Blues for an Alabama Sky” and “M*A*S*H.”

The rest of the talented ensemble had to be re-cast earlier this year, and you can tell they are each right for their roles, but the actors embodying the key Berniece and Boy Willie displayed occasional shortcomings Saturday that some more rehearsal time and tighter direction could fix.

Dante Turner (a leader in his 52 church and his second stage role here) is solid as Boy Willie, the impulsive, scheming brother who wants to make money and prove himself equal to the white man. It is a huge, challenging role, and Turner mostly appears up to the task, but also seemed to stumble at some points over his lines. In the final scene of the play – which should be the climactic, dramatic peak – the fire and fury were undercut by uncomfortable, unnecessary pauses and gaps, where the action should have barreled thrillingly toward its rumbling appearance of Sutter’s ghost and conflict resolution.

Alisha Hanes is excellent as the haunted, driven Berniece, and she displays many impassioned, touching highlights throughout. We 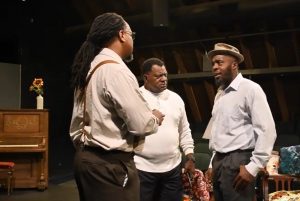 inherently feel her bond with the piano (which Willie doesn’t understand), as it represents their parents – their father died because of it and their mother grieved over it, incessantly asking Berniece to play it after his death.

In the play, Berniece says to Boy Willie: “Look at this piano. Look at it. Mama Ola polished this piano with her tears for seventeen years. For seventeen years she rubbed on it till her hands bled. Then she rubbed the blood in…mixed it up with the rest of the blood on it. Every day that God breathed life into her body she rubbed and cleaned and polished and prayed over it. ‘Play something for me, Berniece. Play something for me, Berniece.’ Every day… You always talking 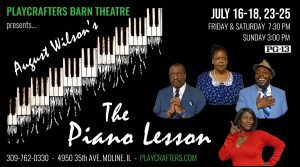 about your daddy but you ain’t never stopped to look at what his foolishness cost your mamma.”

The past literally comes back to torment Berniece, who also is mourning the death of her husband, Crawley. Hanes is magnetic and intense in the role, but there were also times where her quiet vocal delivery didn’t let us hear everything we need to. She obviously knows how to unleash anger and sorrow in equally powerful doses when the script calls for them.

A fittingly subdued scene, sweet and humane, comes in the second act when Harris as Lymon flirts with Berniece, offering her some French perfume. In a play with some big themes and long monologues, this small, fleeting bit is quite affecting. As an actor, Harris actually seems the most natural in the character’s skin here and lights up every scene he’s in.

“The Piano Lesson” cast is filled out by a smooth Antonio Stone as the cool, confident Wining Boy, a cute Kennedi Durant (who is six and wants to be a movie star) as the shy 11-year-old Maretha, and Shawn Bolton as the brief love interest Grace, who will be played the second weekend by LuAnne Sisk.

Kudos to Playcrafters for continuing its long commitment to diversity and expanding the range of stories seen on its stage. There are, of course, eight more plays in Wilson’s staggering cycle, and I look forward to more in the potential series. Here’s hoping we don’t have to wait another 11 years for the next.

Jonathan Turner
Jonathan Turner has been covering the Quad-Cities arts scene for 25 years, first as a reporter with the Dispatch and Rock Island Argus, and then as a reporter with the Quad City Times. Jonathan is also an accomplished actor and musician who has been seen frequently on local theater stages, including the Bucktown Revue and Black Box Theatre.
See More Articles From Jonathan Turner
Advertisement
Tagged: piano lessonpiano lesson reviewPlaycraftersplaycrafters reviewQuadCities theaterquadcities theater reviews