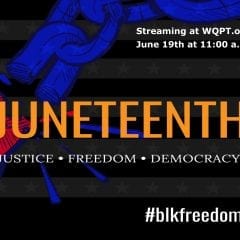 WQPT will stream a virtual commemoration of the 155th anniversary of Juneteenth on June 19 at 11:00 am. Six leading Black museums and historical institutions from coast to coast have joined forces to launch a digital commemoration of Juneteenth, the day that the Emancipation Proclamation was officially enforced, ending enslavement in Texas. This timely event features cultural performances from Africa and across America, educational content and appearances by: Lonnie G. Bunch III, the first African American and first historian to serve as the Secretary of the Smithsonian Institution Dr. Johnnetta... Read More