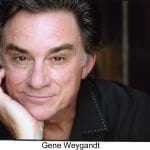 The Black Box Theatre is excited to announce that Broadway and television star Gene Weygandt will be performing at the theatre on October 20 and 21 in A.R. Gurney’s “Love Letters.” Mr. Weygandt will share the stage with Lora Adams. Weygandt played the “Wonderful Wizard of Oz” in “Wicked” in Chicago and on Broadway. Other Broadway credits include his role as Paul in “Big.” Recently he has been seen as Chief Jones in “Chicago Fire” and is a three-time recipient of a Joseph Jefferson Award in Chicago. The Black Box Theatre expresses our gratitude to the Performers’ Unions:... Read More