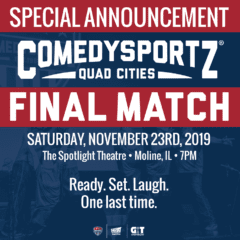 Comedy Sportz is about to pull off their last “yes, and…” After 30 years, the improvisational troupe will no longer play under the Comedy Sportz banner, instead changing their name to the G.I.T. Improv Band starting in December. Comedy Sportz Quad-Cities, one of 29 groups nationwide, debuted March 20, 1990 in the Speakeasy next to Circa ’21. The franchise, based off the popular improvisational game slate created six years earlier and franchised to various locations nationwide in the years after, was brought to town by Jeff and Patrick Adamson and Brett and Denny Hitchcock,... Read More