Sean Leary November 6th, 2019 Things To Do, Rock Island, Local, Events, Entertainment, Comedy Share:
Comedy Sportz is about to pull off their last “yes, and…”
After 30 years, the improvisational troupe will no longer play under the Comedy Sportz banner, instead changing their name to the G.I.T. Improv Band starting in December. 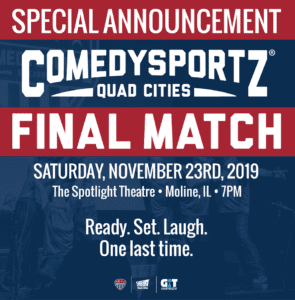 Comedy Sportz Quad-Cities, one of 29 groups nationwide, debuted March 20, 1990 in the Speakeasy next to Circa ’21. The franchise, based off the popular improvisational game slate created six years earlier and franchised to various locations nationwide in the years after, was brought to town by Jeff and Patrick Adamson and Brett and Denny Hitchcock, as a companion to next door’s Circa ’21. The show charmed from the start with its family-friendly humor and upbeat, goofy sense of fun, although it’s evolved considerably and become an incredible launching pad for talent over its three decades.
In August 2010, Sportz moved to the Rocket Theater in Rock Island, just around the corner from the Speakeasy, at 220 19th St., and refurbished the building and re-dubbed it as The Establishment Theater. The move was considered a huge risk at the time, but ended up becoming a tremendous boon for the local comedy and arts scene. The new Establishment location became a successful spot for the CSportz shows as well as occasional additional gigs by outside performers. And with the departure of Comedy Sportz, the Speakeasy opened its doors to a variety of other successful shows, and has become a haven for everything from standup comedy to sketch comedy to R-rated improv to drag shows to burlesque. 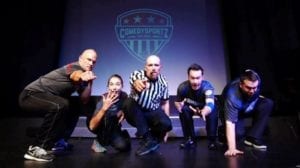 During the past nine years, the Adamsons and their group expanded upon the popular franchise considerably, creating a variety of innovative and fun offshoot shows, including late-night R-rated fare. Among those evolutions were various road shows that the group would take to corporate and private functions, including the popular Guys In Ties, which typically played around 150-200 dates on the road each year.
Earlier in 2019, CSportz left The Establishment behind, handing it off to Dino Hayz’ Center For Living Arts, and trekked over to the Spotlight Theater in Moline. However, at the time, sources in the CSportz camp had said that it was becoming more financially advantageous for them to concentrate more on the road and corporate gigs than their static location shows, which also included a franchise fee for the Comedy Sportz name and brand. 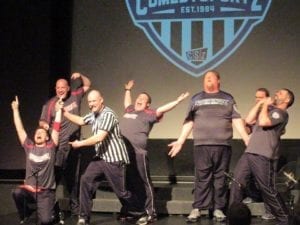 Ergo, the currently announced move makes sense, as they morph into the new G.I.T., based upon their already popular self-created Guys In Ties brand. The new G.I.T. will feature many of the same performers as Comedy Sportz, but will allow for a variety of different improvisational games and comedy stylings outside of the Sportz format. To use the popular truism of improv comedy, it’s another instance of the Adamsons saying “yes, and…” to creating a new pathway to fun and entertainment.

The last matches under the Comedy Sportz banner will take place from 7 to 9:15 p.m. Saturday, Nov. 16 and Nov. 23 at The Spotlight Theatre, 1800 7th Ave., Moline. Tickets are $12 and the show is rated E for everyone, all ages. For tickets go to ShowClix – Online Ticket Sales, Box Office and Admissions Technology