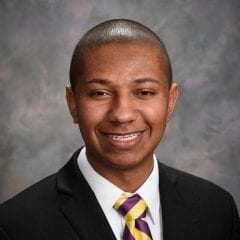 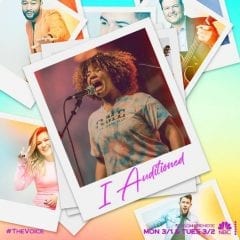 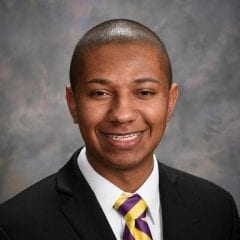 Western Illinois University senior broadcasting major Devin Brooks is close to setting a state record for winning the most scholarships from the Illinois News Broadcasters Association (INBA). Brooks, of St. Louis, MO, has won the INBA scholarship three times and has the opportunity to win a fourth award this spring. “I would not have come across these opportunities without the help of my teachers at WIU,” said Brooks. “They deserve the real recognition for caring about students’ success. It makes a difference when I can worry less about how I’m going to pay for school... Read More

MACOMB, IL – For the second time in two years, Western Illinois University senior broadcasting major Devin Brooks has been one of five national winners awarded the National Academy of Television Arts and Sciences (NATAS) Mid-America EMMY Foundation Walter Cronkite Scholarship. Brooks, of St. Louis, MO, is a student anchor, reporter, executive producer and web producer for NEWS3, the student-produced newscast in the WIU Department of Broadcasting and Journalism He is pursuing an emphasis in news and performance, and is minoring in sociology. This summer, Brooks completed his third summer internship... Read More 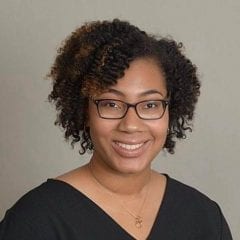 MACOMB, IL – Two Western Illinois University Department of Broadcasting and Journalism students are finishing the school year strong after a semester no one will soon forget. The Illinois News Broadcasters Association (INBA) conference, set for late April, was cancelled due to COVID-19. The convention was supposed to be held in Champaign-Urbana, but organizers moved the competition for student awards and scholarships online. WREX in Rockford broadcasted the awards live on Facebook April 25. WIU students won seven different awards for outstanding television newscast, soft television program, radio... Read More