Between QAnon and the fashion return of flannel and ripped jeans, two of the hottest upcoming trends in pop culture seem to be ’90s nostalgia and the belief in a bizarre conspiracy about celebrities secretly possessed by demons. However, once upon a time, back in The Era of Cellphones The Size Of Bread Loaves, there was a celebrity who actually admitted that yes, he was once possessed by demons, although he was also cured. Odd? Odd, but true. The Lord may work in mysterious ways, but the the way the devil works is obviously just plain strange.  For example, God has been known to communicate... Read More

Q-Cs Heads Back To The ‘90s This Weekend 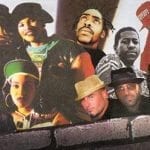