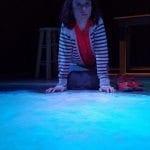 After selling out the initial three-weekend run of performances of the world-premiere of Aaron Randolph’s Broken the QC Theatre Workshop has added three additional performances to meet the high demand – one of which has already sold out. Broken, produced in partnership with Braking Traffik and supported by a grant from the Regional Development Authority, has wowed audiences and critics alike, and the Workshop has already received requests from other organizations around the country that fight human trafficking for information about the play, and possible production in cities as far away as... Read More