Connie Corcoran Wilson October 30th, 2019 Horror Week Share:
As big names in horror go, you can’t get much bigger than Stephen King, and this year saw the release of a new film version of his classic “Pet Sematary,” which is now available on video and streaming for your viewing pleasure as Halloween quickly approaches. So what’s the verdict on the new flick? I reviewed it earlier this year, and here’s my take.

In the 1989 original  film“Pet Sematary” pets buried in a spooky backwoods cemetery come back to life. When a tragedy befalls a child of Louis and Rachel Creed (Jason Clarke and Amy Seimetz), the lure of having their dead child returned to them by reburying the body in the Pet Sematary is too great to resist. [*Don’t watch the trailer if you don’t want to know one of the movie’s major plot twists in advance; it’s a “spoiler” moment]. 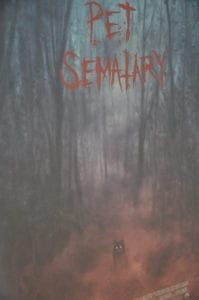 As the plot for the Stephen King 1983 novel and the original film, (released almost exactly 30 years earlier to the day) put it: “With dreams of a better life, a young doctor, Louis Creed, and his family—wife Rachel, their 9-year-old daughter Ellie, and their 3-year-old toddler, Gage—move to their new home in the small rural town of Ludlow, Maine, alarmingly close to a busy highway.  However, when Rachel’s cherished tomcat, Church, is inadvertently killed in an awful accident, a desperate Louis will reluctantly take his friendly neighbor’s advice to bury it in an ancient Micmac graveyard—a mystical burial ground imbued with re-animating powers.  Despite the terrible results and insistent warnings, a tragedy-stricken Louis in the wake of the death of his child, goes back to the Indian cemetery, hoping that, this time, things will be different. But can the dead return from the grave?”

Despite the lure of having a loved one come back from the dead, the tag line for this movie is, “Sometimes, dead is better.” 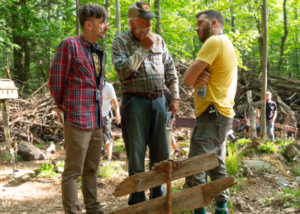 There are changes in Matt Greenberg’s treatment of Stephen King’s original concept. As the directors told the audience, onstage, following the World Premiere as the closing film of SXSW, “I was a big fan of the original. You know it exists. It was an influence on us.  There were homages, but there comes a time when you have to start making your own film out of it.”

Jason Clarke had not seen the finished product until this night. He described himself as “very proud and very freaked out” and said, “I enjoyed the experience” commenting on the thrill of seeing a film at the theater in a large group. When Jete Laurence, who plays Ellie in the film, was asked if she found playing her part frightening, she answered, “It was really cool.  I wasn’t that scared because I was one of the scary ones.”

One audience questioner wanted to know why there wasn’t more gore shown in the child’s death scene. Answered the directors:  “You gotta’ be really specific about how you show blood.  With the child’s death, the horror is reflected in the looks on Jason’s and Amy’s faces.” 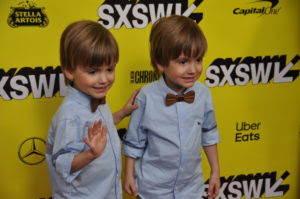 Q:  How did the 3-year-old twins who played Gage (Hugo and Lucas Levoie) deal with the scary stuff?

A:  With them, it was all just playing—like it’s a game. They thought it was a game and had a great time.

Amy Seimetz remarked, “I think what’s interesting about this is that it’s a meditation on the source material.  We’re all gonna’ die, so we can all meditate on that.” She added, “Having been in a lot of genre films, it is everything I want in a genre film.”

The film respects the essence of the 1983 novel, but refreshes it for a new generation. As one of the directors said, “Let’s get under the skin of what’s happening with death.” The directors said they have heard that Stephen King appreciates it when other artists bring their own artistic visions into play and added, “It was validating to hear that he was a fan of the film.” 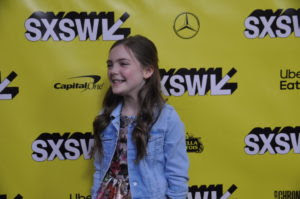 Jete when asked if she had seen the original 1989 film version of “Pet Sematary,” said, “I think if I saw the original, I might not have as many creative ideas.”

The mood of the piece is appropriately creepy. Music by Christopher Young is relied on heavily and it delivers.Directors Kevin Kolsch and Dennis Widmyer seemed to know what they wanted to achieve; their previous film “Starry Eyes” (2014) was a bit of a Faustian rip-off, so refashioning an older tale is not new to them.

With actors as good as John Lithgow and Jason Clarke, you know that they will do a good job. The children are also up to the task. 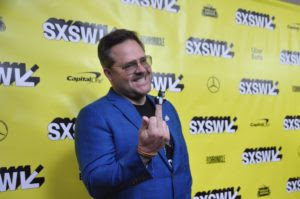 One producer was asked about his fears when doing the remake, “Well, you know what they say about filming with children and animals. (laughter) Also, dogs train well. Cats—not so much. But we had such great child actors.”

That last statement was definitely true. Young Jete and the twins who played Gage did a great job, alongside three seasoned veterans (Clarke, Lithgow and Seinmetz). The cat from hell was appropriately diabolical, as well. 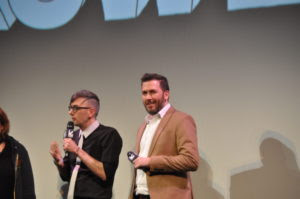 The set that represented the pet cemetery was well done, although you really had to wonder how the actors could climb the wall of sticks and brambles that were supposed to keep the bad vibes in or out without injury.

The end of the piece will leave you pondering. There are film endings that provoke thought; this is one of them. What will become of this family? What will Louis Creed’s co-workers reaction be when he shows up for work at the clinic ? Or Ellie Creed’s fellow students at her elementary school? (Another film, perhaps? Maybe even a dark comedy?) 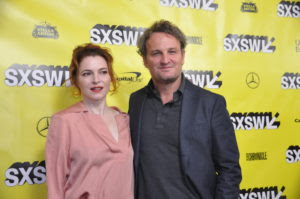 While the music was good, it might have been relied on  too heavily at times, to produce “jump” scares. You know the kind: the teenager is going to the basement or the attic. The adult is approaching a large wardrobe or closet or door and we are all waiting to find out what is behind the door.

The heavy fog was so thick that it made me think of the 1971 Academy Awards  when the theme from “Shaft” was played onstage as a nominated song and the performer singing it (Isaac Hayes) completely disappeared. There’s fog in low swampy places and then there’s Major League Fog, all the time, everywhere, as in this Pet Sematary. (*Odd thing I noticed in the film: when Louis Creed (Jason Clarke) types in Pet Cemetery to his computer, he misspells it–again— as Pet Cemetary. It’s all e’s all the time.) 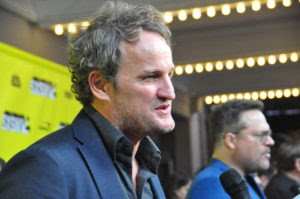 There was  a lot of graphic violence during the last one-half hour, as opposed to a relatively bloodless first two-thirds of the film. Audiences today may demand such graphic gore; I always admired the Hitchcock touch. Hitchcock gave the impression of a knife being used to dispatch Janet Leigh in “Psycho’s ” shower scene but, through clever cutting of the film, the knife never is really shown being plunged into the victim. A little less plunging and twisting is  fine by me.

I didn’t feel that there was anything excitingly original or new being shown us in this film, but the end result was a perfectly acceptable genre film, buoyed by the good performances of the cast.  Producer Lorenzo di Bonaventura, from the stage, sarcastically called the movie,  “The feel good movie of 2019.”

If this film were a baseball game, nobody would be saying it was “a home run.” But the movie was a good solid hit—at least a double—maybe even a triple. For me, the all-around superlative performances of every actor involved– child or adult—carried the film through familiar territory that we all have covered before, since the original film thirty years ago and the novel 36

years ago. The attempt(s) to secure a new “twist” or ending were successful, (although I kept wondering what Dr. Creed reporting for work the next day at the clinic would be like. Or Ellie Creed’s return to school. Maybe another movie?)

As genre horror movies go, this one is superior to most. It’s no “A Quiet Place,” but it’s good.