Writing a new play is murder. Well, it certainly was for busy Q-C actor, director, and theater owner Tristan Tapscott, whose latest original work – “Murder at Mistwell Manor” – is a breezy blast.

Known in part — before he opened The Mockingbird on Main theater last summer — for penning a new musical adaptation of “A Christmas Carol” (with composer Danny White), Tapscott now has three original plays under his belt in the new cabaret-style space that welcomes new works. In December, the Mockingbird opened the silly holiday show “Deck the Halls,” and in March, it staged Tapscott’s two-person adaptation of “Around the World in 80 Days.” Now comes the noir mystery, “Murder at Mistwell Manor,” an assured, affectionate homage to classic black-and-white movies and icons like “The Maltese Falcon” and Sherlock Holmes, the king of fictional detectives. 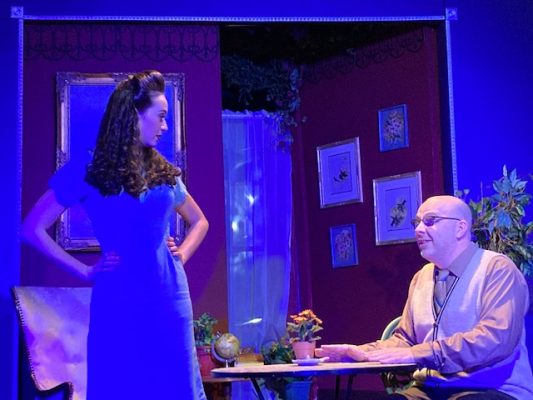 It’s a jewel of a play (small, shining and crafted with care) in the jewel-box theater, and an ideal, spot-on four-person cast. The beautiful drawing-room set in mid-century Los Angeles features framed paintings on maroon walls, a big carpet, plants, a small table with wrought-iron chairs, and a larger chair in the left corner. The story’s plot is driven by a doctor, a Hollywood starlet, the manor’s caretaker, detective and two dead bodies. Suspicions run wild as Detective Walters hurries to solve the case before another drops dead, which someone eventually does.

“Murder at Mistwell Manor” features a top-notch cast — Eric Teeter as Milton Bair, the shy, awkward caretaker; Savannah Bay Strandin as Helen Havoc, the haughty, confident and glamorous starlet; Doug Kutzli as Roy Walters, the egotistical, theatrical detective; and Jeremy Littlejohn as Jonathan Brooks, the dismissive doctor who really doesn’t have time for any of this. 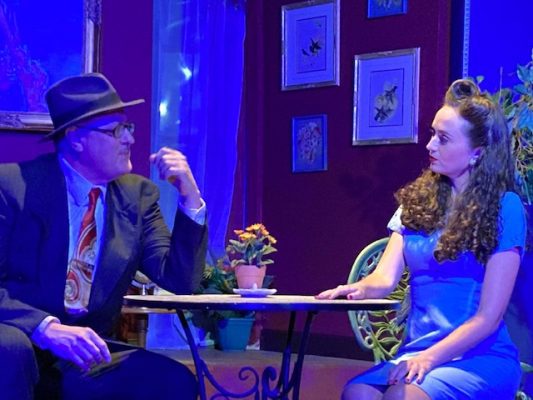 While appropriately spooky music and flashes of lightning (behind a sheer curtain at rear) set the mood before a line is uttered, the dark and stormy night of the story is frequently accentuated by sounds of thunder.

It’s always a treat to watch Kutzli roam and dominate the stage here, as he tries to solve the killings of a film producer and murder mystery screenwriter. The three suspects have seemingly tight alibis, and when one questions the detective (who already was on his way to meet with the producer), Walters drily declares: “You can’t have the detective be the murderer; it’s been done too many times.”

Many highlights of the fleet, fun one-hour show are the tense, rapid-fire faceoffs between Kutzli and Strandin’s characters – titanic battles of will and intellect. Tapscott includes a deserved tribute to how Holmes operated in Arthur Conan Doyle’s immortal stories – he stands out in noticing details in answering the “why” of a murder. Sherlock always relied on keen observations, finding things that most people didn’t see, assembling patterns of behavior and rationales that lead to definitive theories that catch the criminals.

In addition to nailing the Hollywood diva role, I appreciated Strandin’s blue dress that perfectly complements the blue backdrop of the stage and in the main painting at left. Each of the actors also appropriately inject a good bit of snark and exhaustion into their parts. Tapscott wisely leavens the heavy goings-on with occasional flashes of humor (which includes some of the cliched thunder at key dramatic points). 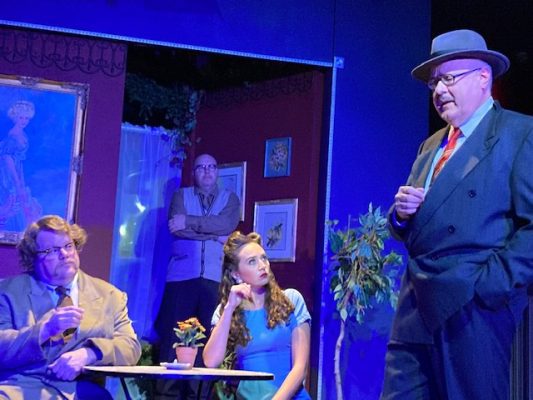 The Mockingbird should be applauded for taking risks with new pieces of theater, and it must be a thrill for actors to be the first to play a part. Like “Composers Datebook” on public radio advertises, “all music was once new.”

“Murder at Mistwell Manor” will continue on Friday and Saturday nights, April 15-16, at 8 p.m. Tickets are $15, available at www.themockingbirdonmain.com/. 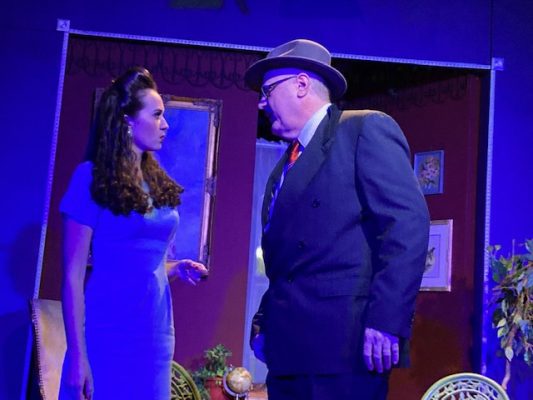