The latest production at Moline’s intimate Black Box Theatre isn’t one necessarily to be enjoyed, but is a terrifying thriller – tailor-made for fans of suspense, mystery and horror.

The whiplash-inducing, psychological roller-coaster “Veronica’s Room” (1973) truly puts the “black” in Black Box. Director and co-founder Lora Adams warns as much in her brief introduction to the exhilarating, hard-to-watch four-actor play by the demented genius Ira Levin (1929-2007) — author of “Rosemary’s Baby,” “Deathtrap,” “The Stepford Wives” and “The Boys From Brazil.”

“I would usually say, sit back and relax, but relaxing isn’t really what we want you to do,” she said before the Saturday performance in the 60-seat venue. “Get ready to be thrilled.” 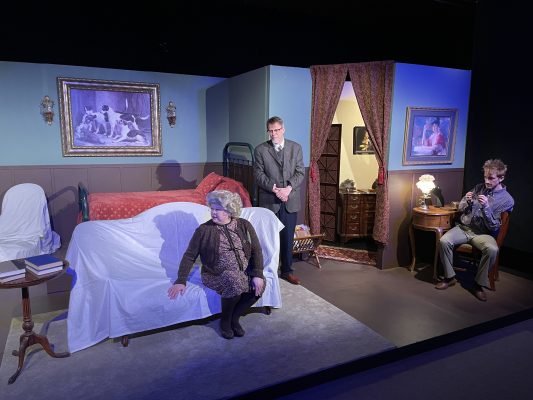 I certainly was, and deeply disturbed. At the climactic, tragic conclusion of the story (which encompasses incest, murder, necrophilia and insanity), it’s horrifying to consider what motivated these depraved characters. This chilling mystery explores the thin line between fantasy and reality, madness and murder. Students Susan and Larry (excellently played here by Adrienne Jane Evans and Adam Cerny) find themselves as guests enticed to the Brabissant mansion by its dissolute Irish caretakers, the lonely Mackeys (Don Faust and Wendy Czekalski).

Struck by Susan’s strong resemblance to Veronica Brabissant, long-dead daughter of the family for whom they work, the older couple gradually induce her to impersonate Veronica to offer solace the only living Brabissant, her addled sister Cissie, who believes Veronica alive, the play summary says. Once dressed in Veronica’s clothes, the 1970s Susan finds herself locked in the role and locked in Veronica’s room. Or is she Veronica, in 1935, pretending to be an imaginary Susan?

The first half of the story is by far the gentler, easier to take and more straightforward, than the batshit-crazy second act.

The older couple met the young pair at a restaurant, when they told Susan how much she looked like Veronica, and brought them back to the house to show a photo and suggest the elaborate role-playing. Here Faust and Czekalski (listed in the program simply as The Man and The Woman) are kindly, warm-hearted and generous. Evans and Cerny (playing simply The Young Woman and The Young Man) are at first doubtful, but Evans quickly gains enthusiasm, and thinks the exercise will be fun, since she acted in high school and she’s a sociology major (she’s a Boston college students here). Cerny’s character is an attorney, is much more skeptical and suspects the Mackeys have something more sinister in mind (if he only knew!) 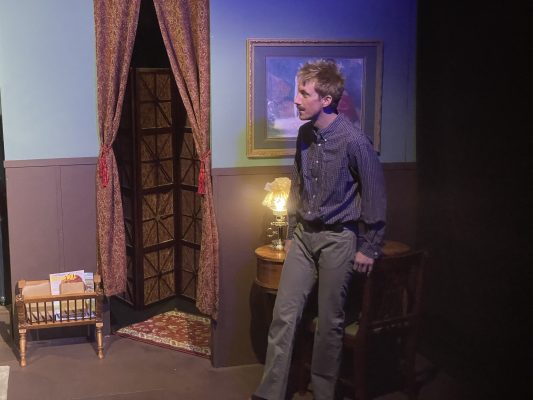 Evans is sweet and perky, and Czekalski is motherly and protective in their scenes together. Evans puts on one of Veronica’s dresses and Czekalski helps pin her hair up. Trouble is first afoot when Susan gets locked in the room and Czekalski re-emerges as a much younger character (a total opposite of before), very cold and mean. Uh-oh…

Since the second act is set in 1935, and a totally different set of characters (save Susan…please?), I can’t reveal much of the unpredictable, twisty plot, that totally goes off the rails. Suffice it to say, that Susan is forced to endure a relentless nightmare, which descends into harrowing madness. Evans reveals the depths of the character’s pain, confusion and horror with blazing emotion and relatability. Faust and Czekalski become threatening and intimidating, and cause Evans to literally lose her mind. Cerny – who was likable, though a bit formal and upright in the first act – becomes another authority figure, decisive and imposing in the second. The three also take on more ghastly, unimaginable roles by the end. 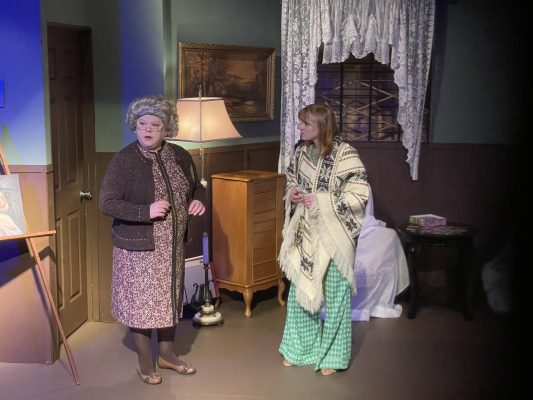 Black Box – now in its sixth season – has been a consistent gem in the Q-C theater season, typically presenting first-class productions, and “Veronica’s Room” is no different, including its tasteful set (belying the haunted house it becomes).

The play is both directed and designed by Adams, with set construction by Michael Kopriva, stage manager Kori Ralston, crew Samantha Lindholm, and light design by David Miller. Remaining performances are Thursday to Saturday, April 14-16, at 7:30 p.m. Seats for Thursday are just $13, and $16 the other times. Tickets are available at theblackboxtheatre.com. Masks are not required but encouraged. 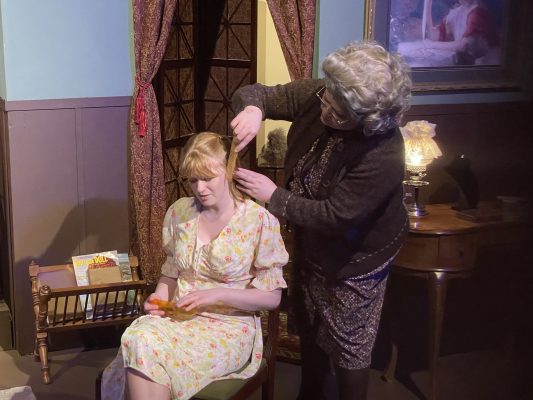