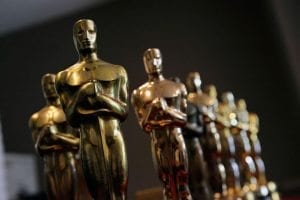 The Academy Awards will begin at 7:30 p.m. Sunday, airing on ABC, and finally all of the speculation will be over in regard to who will walk away with the coveted statues.

So who will win? Here are this critic’s humble picks.

And the Oscar goes to…

Manchester by the Sea

WINNER: La La Land did tie Titanic’s record and has all the spot on buzz around it. It will be hard to beat this beautiful and energetic film.

POSSIBLE UPSET: I wouldn’t be too surprised if Hidden Figures came up from behind and took La La’s prize. It would be a political move and I totally understand how show business works. There is one film, however, that is as good if not better than the bombastic musical and that film is Arrival. Talk about importance and relevance! Arrival doesn’t fit the mold of “Picture of the Year” but it’s astonishing and worthy of an upset.

Kenneth Lonergan, Manchester by the Sea

WINNER: Damien Chazelle did some stupid amazing work with La La Land and even La La deniers have a hard time saying otherwise. The dude is talented and worthy of this prize especially after last year’s dyamic turn with Whiplash.

POSSIBLE UPSET: Here’s where it gets tricky. With Chazelle, the Academy would have the youngest in history to win this award. With Jenkins, the Academy would award the first African American. Look out for Jenkins (who is worthy) as the Academy might want to make an important statement at this year’s show.

Casey Affleck, Manchester by the Sea

HERE’S THE DEAL: At one time Affleck was the clear front-runner and winner. Because the major awards are now split, this is a tight race between Washington and Affleck. The performances could not be more different  –  Affleck sad and somber and Washington bold and brassy – and it could really go either way. They could also tie? It’s tough to make a call on this and I will simply say one of these dudes will walk away with trophy on Oscar night.

WINNER: Anybody gonna step in Emma Stone’s way? Not likely. The co-star of Superbad will soon be an Academy Award Winner! Watch her final tune in La La Land and try to argue with me!

POSSIBLE UPSET: It’s doubtful that anyone can touch Stone at this point so I don’t foresee an upset. I will say that it’s still a damn shame Amy Adams isn’t in the running; she gives one of the top performances of her career and the year in Arrival.

Lucas Hedges, Manchester by the Sea

POSSIBLE UPSET: Michael Shannon is always a rock star and I wouldn’t be too surprised if he pulls a stunning upset here. Shannon is tricky like that.

Michelle Williams, Manchester by the Sea