All Hail Timothy Olyphant In This ‘Diet’! 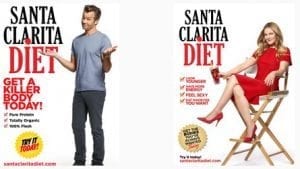 All hail Timothy Olyphant (and Netflix).

The story revolves around a Santa Clarita real estate couple: Olyphant’s pot-smoking, overly devoted, classic bad-joke-in-the-back-yard husband Joel and Barrymore’s Sheila, who (spoiler alert)  has become a flesh eating zombie. Because of Sheila’s new found cravings, Joel and their daughter (Liv Hewson) and neighborhood kid (Skyler Gisondo) must continue to find a) a cure and b) people for her to eat (but only bad people). It’s absurd, hilarious and not in touch with the zeitgeist which ultimately makes damn near perfect.

Santa Clarita Diet makes no apologies and plays its story out with such honesty that you forget how absolutely ridiculous the concept is. The series even manages to poke fun at itself several times and makes sure it’s always one step ahead of anyone watching. It is what it is – a story about a family dealings with the cards they’ve been dealt –  and it’s not going for anything more than that.  (You could dive in and find the obvious sociopolitical undertones but couldn’t we do that with everything?) With this series, Netflix is all about bringing us ENTERTAINMENT with no ties.  You really have to admire what they are doing here and they are knocking it out of the park.

While Drew Barrymore is the more recognizable star and obvious vehicle for the series, it’s Timothy Olyphant that makes it worth it.  He’s been given the best lines and the best journey in the series and he’s taking full advantage of the opportunity.  I know Olyphant the way we all do from The Office and Justified (or from his rock star villainous turn in Live Free or Die Hard) but this is new territory for him. It feels so good to see an actor try something a little outside the box for their type and absolutely nail it. Olyphant has a wonderful knack for timing and physical comedy and seems to understand that real humor comes from the truth. You won’t ever find him really mining for a laugh so we never see that whole actor struggling with comedy thing; we just see him living and breathing as his character. It is a refreshing performance.

I can see how the description of the show on paper will turn some viewers off. I get that. Had I known more about it before my wife turned it on, I might have bailed on the series. I dove in and had a great time and I encourage you to explore this series with the same kind of no-fucks-given attitude. I think you may have fun and fill your evening with laughter (and we all need a little laughter right now). Escape this world for a little while and enter the bizarre world of the Hammond’s: It’s a wild ride.

Tristan Tapscott
Tristan Layne Tapscott has been dubbed the “Quad Cities’ P.T. Barnum” and although the person who initially said it meant it as an insult, he happily accepts the title.
See More Articles From Tristan Tapscott
Tagged: : Timothy OlymphantDrew BarrymoreNetflixSanta Clarita DietTristan TapscottTV review