Sean Leary April 22nd, 2022 Rock Island, Sean Leary Share:
It’s extremely rare that your brand becomes so well known that it becomes a part of the popular lexicon, particularly in regard to a term of social interaction.
But, Netflix and Chill, has become a popular phrase over the last couple of years.
The introduction of it into the social conversation just goes to show how ubiquitous Netflix has become over the past few years. It’s pretty amazing. Twenty years ago, the company, struggling along, went to Blockbuster attempting to sell themselves to the then-monolithic entertainment entity. Now, Netflix is a goliath, and Blockbuster, well, it’s Blockbuster.

However, Blockbuster is also a cautionary tale.
And perhaps it’s one that Netflix should re-read.
The company has been on a massive roll over the past few years, but now it’s shooting itself in the feet with both barrels.
First it raised its rates, again.
Then it started a string of bad press in which it said it was going to be cracking down on people sharing accounts — all in the midst of the company recording record profits.
Now, it’s talking about having to restructure and right size and all that other code speak for “we’re diminishing our product but expect you to pay just as much for it, if not more, while we continue to pursue even larger profits for ourselves.”
And really, what’s going on with Netflix encapsulates so much of what’s wrong with our country right now: The endless unrealistic pursuit of constant record profits.
Sometimes, some quarters, you just aren’t going to make a profit. Some quarters you’ll be down. Some quarters you’ll break even. Some quarters you’ll do great. During the last of the three, you need to save money to cover the other two.
Advertisement
That was the business model for any business, and for that matter every household, for decades, until a diseased version of capitalism began to cancer its way into the marketplace. This diseased version was a delusional idea that EVERY quarter needed to not just be a profitable one, but it needed to beat the previous one, and the same one from the previous year. If it didn’t, it was perceived there was something wrong, and that something needed to be addressed, usually in the form of coming down harder on employees, particularly those responsible for sales.
But here’s the thing: The marketplace operates on a fairly standard formula of supply and demand. It always has. There’s a demand for certain things and at certain times, due to a number of factors, the market ebbs and wanes. There’s a demand for seeds and summer furniture in the spring and summer. Not so much in the fall and winter. There’s a demand for hats and gloves in the winter, not so much in the summer. It just makes sense.
The problem is though, that so many top execs and shareholders have become addicted to the big bonuses that come with these booming quarterly profit statements. So it’s not enough for the company to ride out the lean months, no, goddamn it, there can’t be any lean months. So if a glove and hat company is having its sales drop in the spring and summer, well, to hell with common sense and past logic, they need to lay off some employees or cut benefits in order to keep those profits pumping! Doesn’t matter that in the long run, that’s counter-productive, because all that matters is the instant gratification of the present. 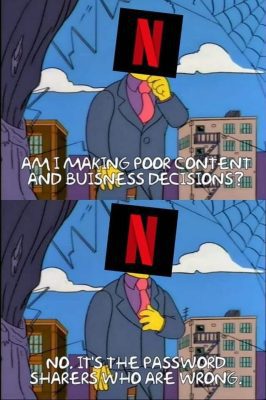 This all comes around to Netflix and the ridiculous demands of its highest executives right now, all based upon an ignorance of common sense and a preponderance of greed and delusion.
Bottom line: NETFLIX HAS THRIVED OVER THE LAST TWO YEARS BECAUSE OF THE PANDEMIC. The time of covid forced people indoors more, and that meant more people watching TV, which meant more of an audience for Netflix.
But the pandemic is largely over at this point. It always was going to be at some point. And common sense was going to dictate that when that happened, demand for Netflix was going to fall, and so were profits.
But, ya know, God forbid the executives over the last two years realize that and plan ahead, save a bunch of those profits for the inevitable years of corrections which were bound to come.

Instead, they follow the same path as so many other corporations who are addicted to those profits, and like a junkie, are making bad decisions to try to keep them flowing into their veins.
And, in the long run, that could lead to their demise.
The same way it’s led to the demise of so many other businesses that have followed the same path.
Such as Blockbuster.
And will lead to the demise of many more, until this disease is recognized and cured.
There is no such thing as unlimited growth. That’s not a realistic expectation. Instead, the recognition of the ups and downs of the market, and smart accumulation of the former and preparation for the latter, is what’s needed to sustain a lengthy business plan.
Call it Netflix saving profits, and chilling, before it Blockbusters itself and loses its audience.

Sean Leary
Sean Leary is an author, director, artist, musician, producer and entrepreneur who has been writing professionally since debuting at age 11 in the pages of the Comics Buyers Guide. An honors graduate of the University of Southern California masters program, he has written over 50 books including the best-sellers The Arimathean, Every Number is Lucky to Someone and We Are All Characters.
See More Articles From Sean Leary
Advertisement
Tagged: netfilx password sharingnetflix and blockbusternetflix and chillnetflix profitsnetflix raising prices