Happy Joe Was A Legend Who Lived Up To His Name

Sean Leary October 29th, 2019 Sean Leary Share:
He really did live up to his name, and lived a life of which anyone could be proud, and honored to follow.
Happy Joe Whitty, with his signature straw hat, bright red and blue old-timey attire, wire glasses, mustache, and boundless demeanor of joy, was one of those few people who lived his public and private life at the same wavelength of happiness. He passed away today, leaving behind a grieving family whose lives he blessed and thousands of others who were likewise lightened by his being in their lives. 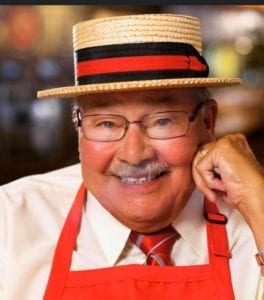 He was a giant in business, building an empire of joy on restaurants and a food which brought countless smiles to Quad-Citians. Almost everyone who lived in the Q-Cs for any amount of time spent some time at a Happy Joes, and invariably that time was far more often than not, enjoyable. He started off in his own kitchen, crafting pizzas, and became a local legend welcome at anyone’s table. But for all his business accomplishments, it was always his accomplishments, his legacy, as a human being, which seemed far more significant.
I talked to Joe various times over the years, for various stories, and he was always the same — always upbeat, happy to talk, polite and unfailingly engaged in his work, which went far beyond pizza.
The first time I met him, he greeted me with a smile, but didn’t immediately shake my hand or talk to me. Not because he was being rude, or in the middle of making a pizza or something likewise, but because he was engaged in a conversation with a young, mentally handicapped boy. It was at one of Joe’s signature events he held regularly, during which he would provide free food and throw a party for kids, oftentimes kids who were experiencing some sort of disadvantage in their lives.
I was there to cover the story for the newspaper. But instead of jumping into the camera spotlight or jostling for the publicity, Joe made me wait, because me being there wasn’t the important thing. That child being there was. 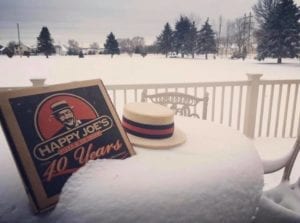 Throughout that first time I interviewed him, walking through the party, he was stopped and engaged in conversation a number of times, and each time it was the same. He made that child he was talking to his full focus, gave them all his attention, and made them feel special. Judging by the smiles on their faces, made them feel… happy.
And that’s what he was all about. In an age of spin, where people craft careful personas for the mirage of their social media, Joe Whitty was authentic. He really was Happy Joe. It wasn’t just a fake character he stepped into for the cameras. He was that guy, helping out endlessly behind the scenes, sponsoring myriad charities, reveling in the joy he brought to families and kids, especially at those charity events.
And what wasn’t to enjoy? A trip to Happy Joes was an event, one which always brought smiles.
In an increasing era of cynicism and criticism, Happy Joes remained above the fray. There was no knocking Happy Joes pizza. The taco pizza, which Joe created, was a marvelous concoction of deliciousness. The various other styles, from your traditional pepperoni to barbecue and more, were always enjoyable, always top notch. I don’t think I met anyone who ever had a bad thing to say about Happy Joes pizza, or Happy Joe. And again, that’s extremely rare in this world.
Personally, aside from my professional meetings with him for interviews, I would run into him from time to time at his restaurants, especially Jungle Bungle, which my son and his friends particularly enjoyed, and which was and is one of their favorite spots. Joe was always kind, always polite, and always mindful of the children. He always wanted to hear their opinions, wanted to talk to them about what they liked, honoring them as people and trying to make their lives more magical.
Through his charitable endeavors, he did that for a great number of kids. It’s no stretch to say he changed the lives of thousands of children for the better, no exaggeration to say that he was a giant of a man whose legacy will be one of happiness.
His daughter, Kristel Whitty-Ersan, posted the following on her Facebook page just after 1 this afternoon:
“Happy Joe Whitty completed his life’s work today. He now rests in God‘s loving arms. He was a fabulous father, grandfather, brother, uncle, community- leader, as well as an advocate for those with special needs.

Joe inspired us all. Feel free to post your stories, messages and photos.

We are working on arrangements for a Celebration of Life event. Details will be posted soon.

Remember Joe with happiness. He was a bright light in our world with an unforgettable smile and a compassionate faithful heart.