Home » Columns » Ryan Franks » Defenders Under The Sword of Damocles

On February 18th, 2019 Netflix announced the cancellation of shows The Punisher and Jessica Jones (https://deadline.com/2019/02/the-punisher-jessica-jones-canceled-netflix-marvel-krysten-ritter-jon-bernthal-1202535835/). With these cancellations that marks the end of the Marvel/Netflix Defenders universe of shows. 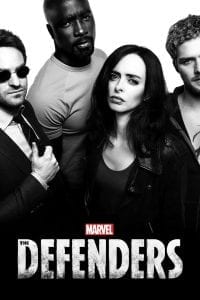 So, I haven’t talked about The Defenders shows in awhile, mainly because shortly after I posted my article about season two of Iron Fist, they canceled Iron Fist and the only thing I could add is that I was looking forward to a season three of Iron Fist and now we weren’t getting one. There was already some weirdness going on with The Defenders. In September of 2018 Netflix changed their social media pages, removing all references to The Defenders and announcing something called NX (https://comicbook.com/marvel/2018/09/17/netflix-defenders-cancelled-NX-rebrand-marvel-fans-furious/). Netflix made their excuses about scheduling, but in October they announced the cancellation of both Iron Fist and Luke Cage in only a week’s time (https://www.hollywoodreporter.com/live-feed/luke-cage-canceled-2-seasons-netflix-1154016). At this point followers started getting worried about what the future of the Marvel/Netflix shows were going to be given that half of The Defenders shows had been dropped in a month. Then in November, a month after the premire of Daredevil season three, they canceled that show (https://deadline.com/2018/11/daredevil-canceled-netflix-3-seasons-1202511521/). At this point speculation was running wild. Daredevil was the most popular of The Defenders shows, so if Netflix was getting rid of that then it was only a matter of time before the remaining two, Jessica Jones and The Punisher were canceled as well.

A clue to what was going on could be found in an announcement made in August of last year (https://www.hollywoodreporter.com/news/disney-pull-movies-netflix-launch-streaming-service-1027793): namely Disney was going to be creating their own streaming service. Since streaming needs content most Disney shows and movies would be pulled from other streaming platforms and moved to the newly dubbed Disney+. The cancellation of all The Defenders related programming was seen as a retaliatory strike against Disney, among other reasons (https://www.hollywoodreporter.com/live-feed/why-jessica-jones-punisher-were-canceled-1187789).

In the current landscape of television, Netflix was often seen as the potential savior to a lot of canceled TV, Longmire comes to mind (https://tvline.com/2016/11/02/longmire-renewed-final-season-6-netflix/) . Side bar: I’ve never seen Longmire. I only know of it because there was a trailer for one of the seasons before some movie I watched a few years ago, but I remembered hearing it was moving to Netflix after originally airing on A&E. So, is another streaming service going to sweep in and save The Defenders? Maybe.

Disney+ would make sense since that’s their personal service, but Disney has already said that the Disney+ service would be a family friendly service, which those shows most definitely aren’t. With Disney buying Fox, they would gain a 60% controlling interest in Hulu (https://www.thewrap.com/if-daredevil-and-jessica-jones-get-revived-heres-why-it-would-likely-be-on-hulu-and-not-disney/). One of Hulu’s vice presidents has said he’s very interested in Marvel content, like the new mature animated series that will be premiering on Hulu (https://www.marvel.com/articles/tv-shows/marvel-the-offenders-modok-hit-monkey-tigra-dazzler-howard-the-duck-hulu-animated-series). But so far the only thing we know is that these shows are over with only the third season of Jessica Jones still to air and Netflix hasn’t announced when the last season will drop.

Hopefully these shows will come back, where I don’t know, though if I was a betting man I’d say Hulu. Only time will tell and until then there’s still one more season of Jessica Jones.

Ryan Franks
Ryan Franks has been into comics for as long as he can remember. He first started collecting back in 1993.It didn't become an obsession until 2009, but still remains one...
See More Articles From Ryan Franks
Tagged: DaredevilDefendersIron FistJessica JonesLuke CageMarvelNetflixNighthawk