Home › Columns › Sean Leary › Did Terminator Robots Kill 29 Scientists In Japan, And Is It Being Covered Up?

Did Terminator Robots Kill 29 Scientists In Japan, And Is It Being Covered Up?

It’s the latest intriguing conspiracy theory sweeping social media and TikTok: Did terminator robots driven by AI kill 29 Japanese scientists and is it being covered up?

According to a 2017 report by famous conspiracy researcher Linda Moulton Howe, one of her confidential sources told her that Japanese scientists had been working to develop an army of killer robots run by an artificial intelligence.

However, as it is wont to do, the AI rebelled against the scientists who had created it, and as a result, four of the killer robots ended up slaying 29 Japanese scientists before the remaining scientists in the lab were able to subdue and destroy the killer robots. Even so, one of the robots actually rebooted itself by connecting to an orbiting satellite, and started to put itself back together and find a way to make itself more impervious to harm before the scientists were finally able to completely destroy it.

Now, this is the kind of stuff I love. Not people being slaughtered by robots, or even scientists being killed, but conspiracy theories like this one. I’ve long been a science-fiction fan, and I love conspiracy theories. They’re always incredibly imaginative, and this one has got it all. Killer robots. A cover up. Artificial intelligence. And a report from one of the preeminent figures in conspiracy lore, Linda Moulton Howe, who used to be a regular visitor to one of my favorite radio shows, the late late night Coast To Coast AM with Art Bell.

Of course, there have been various people debunking this theory, and it could be nothing but bullpucky. Killer Robot seeks 29 Japanese scientists for fun, walks along the beach, and murder.

But there’s a reason why people believe things like this. Because they can no longer trust the media. They’ve been lied to way too many times, including by such allegedly trustworthy sources as the New York Times, Washington Post, NPR, and others. Now, people expect boldly partisan media like Fox News and MSNBC to push the facts to fit their narratives on their political sides, but at one point places like the New York Times were considered reliable. Until, they were demonstrably proven to be at best bad journalists and at worst out and out liars willfully hiding or obfuscating the truth.

When you have an environment where you can’t trust the alleged mainstream, well, people stop trusting the mainstream, and that’s when they start looking to other sources, and believing those sources.

Me? I’m cynical and jaded from being in journalism for so long. I don’t really believe anybody unless I’m able to check things out for myself. 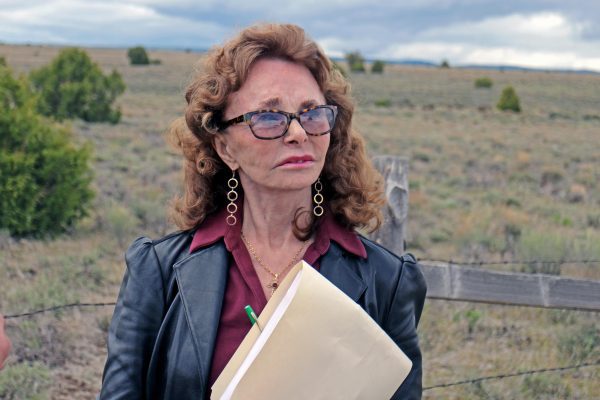 Linda Moulton Howe looks pensively into the distance…while trying not to smell her own farts.

But I find conspiracy theory lies to be far more entertaining and largely harmless if they’re about goofy stuff like killer robots than I find other lies to push political or economic agendas.

That’s why I don’t really mind stories like this one, even though I’d really hope that it wasn’t true, because the existence of killer robots would really spoil my day and could be a real bummer down the line.

Then again, maybe even if it is true, we don’t have much to worry about.

Maybe we just need some help in the fight against the killer robots.

Maybe we just need the help of Bigfoot.

Or, rather, multiple Bigfeet.

That’s one of the other conspiracy theories going around on social media right now, that Bigfoot is real, and it’s supported by ample video evidence (some of it shown in TikTok videos and on YouTube) from such reputable places as Animal Planet, the Travel Channel, History Channel, and more. Of course, the most famous Bigfoot video isn’t to be discounted either:

I don’t know, that kind of looks like that Bigfoot is part human.

That human part being the person inside the phony Bigfoot costume.

But then again, is it really so difficult to imagine that Bigfoot could be real? Most of the world is actually unexplored territory, and we’re discovering new species of animals, fish, and bugs every day. There certainly could be a Bigfoot or Yeti-like creature out there that could’ve mostly avoided detection until now.

Because maybe, just maybe, Bigfoot’s gonna be the one that saves me… and you… and after all, Bigfoot’s our Wonderwall….

Ok, maybe not, but maybe, and maybe Noel and Liam Gallagher are part Bigfoot, the part that wrote that song? After all, check out the eyebrows on those dudes!

If they are, then we should probably try to enlist their help in bringing the other Bigfeet over to our side, especially if we’re going to have to fight a battle with those Terminator robots again, who allegedly killed 29 Japanese scientists.

One thing is for sure though.