Sean Leary December 4th, 2021 Moline, Events, Entertainment, Comedy, Arts & Entertainment News Share:
The Black Box Theatre of the Quad Cities and The Late Nite Shows are proud to present Wisenheimer: 10-Year Anniversary Show on Saturday, December 4th, 2021 at 7:30PM at The Black Box Theatre, located at 1623 5th Avenue in Moline, IL. The show will be hosted by Dan Logan, and feature an opening act, Chowdown Improv, from Des Moines, IA.
Wisenheimer – an improv comedy troupe comprised of Leslie Mitchell, Jeff De Leon, and Jen Kuhle – will celebrate a decade of performing uncensored shows after having performed at a variety of festivals across the country over the years as well as being a selection to the Edinburgh Fringe Festival in Scotland, U.K. The evening will feature a brief retrospective, an opening act improv performance, announcements on future plans, and maybe a surprise or two. 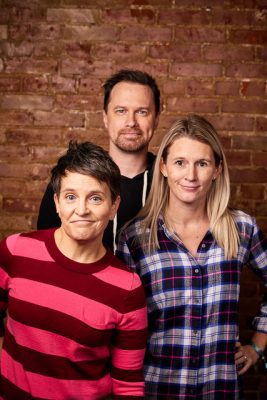 Since 2019, The Black Box Theatre has been home to The Late Nite Shows, and co-owner Lora Adams could not be happier with the arrangement. “The ability to both expand our unique offerings as a theatre as well as give this well-known and established comedy entity a home has been wonderful,” said Adams. The Late Nite Shows were routinely selling out pre-pandemic, and audiences have been steadily returning since relaunching in May. Both that inaugural show and the relaunch were headlined by Wisenheimer to packed houses.
In addition to festivals and their run at The Black Box, Wisenheimer found another home in 2021 at TeeHee’s Comedy Club, located at 1433 Walnut Street in Des Moines, IA. Upon hearing good things about the troupe, owner Sid Juwarker offered a guest spot to the troupe back in March as his club began to re-open following the pandemic. Impressed with what he saw, Juwarker then offered them regular monthly shows in effort to help grow improv in the burgeoning Des Moines comedy community.
A troupe from that very same Des Moines improv scene, Chowdown Improv, will feature as the opening act for the anniversary show at The Black Box.
Advertisement
Wisenheimer started their 10-year run back at The Establishment Theatre in The District of Rock Island. “I still remember Leslie, Jeff, and John [Hannon, a founding member of Wisenheimer] approaching me about the possibility of doing a long-form uncensored show on Wednesday night’s,” said Patrick Adamson, former co-owner of The Establishment. “We agreed on a plan and they did one show every week for an entire year – and their growth, as well as the audience they began to draw, was noticeable.” Adamson added, “What they started eventually became The Late Nite Studio Series which then morphed into The Late Nite Shows as we know them today.” Adamson concluded, “I’m so happy to have been there at the beginning, help them launch, and see how far they’ve come.”
The troupe has seen their cast shift members five times over ten years with co-founders Mitchell and De Leon having been there from the start and planning to keep things going for the foreseeable future. “We promised each other as long as we’re having fun, shows are consistent, it stays creatively fulfilling, and we’re getting the best improv out of each other – then we would keep it going,” said Mitchell. “It’s been a blast for ten years… and it still is!” Former members of the troupe include John Hannon, Nate Klaus, and Brent Tubbs – and almost all are confirmed to be in attendance at the anniversary show. 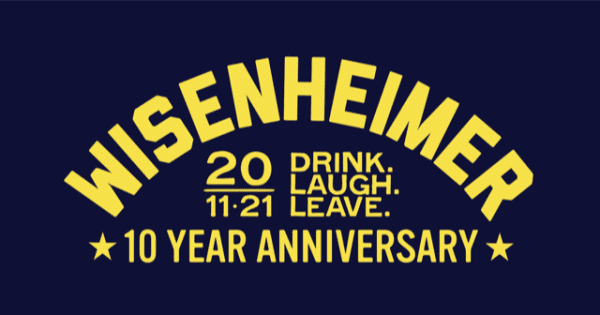 Wisenheimer reached out to Quad-Cities’ comedy stalwart and long-time friend of the troupe, Dan Logan – who is also a member of the opening act, Chowdown Improv – to host the evening, which he was more than happy to do. “To see where this gang has come from 2011 to now is just so impressive – and what is remarkable is how consistently good they are,” said Logan. He added, “For them to have this long of a run and still put on a solid, hysterical evening of entertainment after ten years is to be commended – and I’m honored to be a part of their anniversary show.”
Admission to the show is $10. Tickets are available now by calling The Black Box Theatre Box Office at 563.284.2350 or purchasing online at TheBlackBoxTheatre.com.
Wisenheimer is an improv comedy troupe comprised of Leslie Mitchell, Jeff De Leon, and Jen Kuhle. Founded in 2011, they create relatable characters who bring to life memorable scenes all based off suggestions and a brief conversation with an audience. Having completed a 7-year residency at The Establishment in the Quad Cities, they currently have an open run at both TeeHee’s Comedy Club in Des Moines, IA and The Late Nite Shows at The Black Box Theatre in Moline, IL. For more information as well as episodes of their podcast, visit them online at WeAreWisenheimer.com.
The Black Box Theatre, located in the heart of Moline in the Quad Cities, offers up an eclectic season of live theatre experiences for all audiences. Our seasons are always lively with an eclectic lineup of plays and musicals, and our space welcomes local artists as well. Visit us online at TheBlackBoxTheatre.com.
The Late Nite Shows are uncensored comedy performances featuring improv, sketch, and stand up on select Saturday nights at The Black Box Theatre in Moline, IL, and are produced by G.I.T. Improv. Find out more information on shows and schedules at LateNiteShows.com.