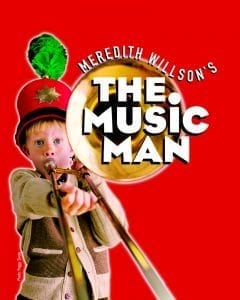 Circa ‘21’s “The Music Man” is a triumphant success. It’s a magnificent show, brilliant on so many levels, and is easily the best show I’ve seen in 2017… so far.

Now, anyone who has followed me over the years knows that I’m not especially a fan of some of the “classic” musicals. They tend to be anachronistic and ridiculous in parts and borderline offensive in others if you actually look beyond the catchy tunes and pay attention to what’s going on.

“The Music Man” is a notable exception to this. It’s got its racist and sexist elements that are certainly of its time, and it’s got the requisite doom-mongering heaped upon a woman who would dare to leave her teens without an engagement ring (horrors!!!!)… BUT… it also subverts them brilliantly and it’s such a smart book that you can’t help but admire how well it’s crafted and how wonderfully entertaining it is. (I’ll eschew getting into great exposition on how timely the material is as well, but I do offer a knowing wink to Circa for picking this script to produce this year. We’ll just leave it at  that.)

As I always say, if you’ve got good material, half your battle is over, and “Music Man” is the goods – catchy songs, terrific book, etc. It’s so good that even the most amateurish junior high theater department can pull it off. It’s like putting a monkey in a Ferrari – it may not run the way it should, and it may end up a disaster, but it’s still entertaining to watch.

But when you put a trained driver behind that wheel, someone who really knows how to work it, well, look out.

And that’s the case with Circa’s production. It’s absolutely brilliant. From the thrilling opening sequence with its glorious song and choreography to the costumes and sets to the little touches thrown in by the background actors to the pitch perfect casting it’s a magnificent triumph, one of the best shows I’ve seen at Circa.

For those who have never seen the show, here’s the rundown: Meredith Willson’s six-time Tony Award-winning musical comedy has been captivating audiences since its Broadway debut in 1957. The show follows fast-talking traveling salesman Harold Hill as he cons the people of River City, Iowa, into buying musical instruments and uniforms for a boys’ band he vows to organize – this despite the fact that he doesn’t know a trombone from a treble clef. 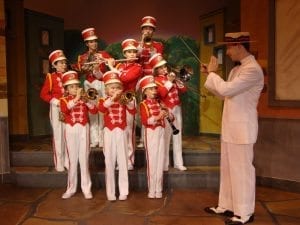 What follows is a madcap yet sweet-natured musical comedy in which our lead is transformed by his true love for the town librarian Marian, and audiences can’t help but tap their toes and hum along to songs from THE MUSIC MAN that have gone on to become timeless standards: “Trouble,” “Seventy-Six Trombones,” “My White Knight,” “Wells Fargo Wagon,” “Gary, Indiana,” and the heartfelt romantic ballad “Till There Was You.”

There’s the puffery. Here’s the real deal: The show is terrific. And a large part of that is the fantastic vision and direction of veteran Jim Hesselman. From beginning to end, Hesselman shows a mastery of the material and there’s a palpable glee to its presentation. I’ve directed and produced plenty of shows, I’ve seen hundreds more, and you can tell when someone really, really has a zeal for the material. And Hesselman displays that here in spades. The choreography is fun and intricate, the costuming and sets are bright and bold and the performances knock it out of the park, ESPECIALLY those of the two leads.

As Harold, Don Denton delivers one of the best performances I’ve seen on the Circa stage. This is a guy who has proven his chops over the years, but his Harold Hill is spellbinding and irresistible. The broad kinetic energy and sly character he brings to the part is perfect.

As Marion, Paige Salter is fantastic. She walks the line between being strong and vulnerable, wizened and winsome and her strength and pragmatism along the way makes her ultimate actions and decisions in the third act reveal perfectly plausible. It’s tougher than you think for an actress to do this and this part is actually quite progressive in its thinking for the time, and Salter strikes just the right notes. 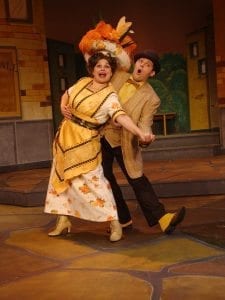 Also of note is the fact that Denton and Salter are real-life paramours, which often leads to a decided wet blanket on onstage/onscreen chemistry. That’s not the case here. You can see how Marion, bored, smart and looking for adventure beyond her books, would fall for the rakish Hill on their own terms and there’s a definite spark between them.

In short, this is a must-see show, and get your tickets fast because word is getting out and shows are selling briskly. Trust me, you don’t want to miss this one.

Reservations are available through the Circa ’21 ticket office. For reservations, contact the theatre at 1828 Third Avenue, Rock Island or by calling (309) 786-7733 extension 2. Online reservations may also be made by visiting www.circa21.com.

Sean Leary
Sean Leary is an author, director, artist, musician, producer and entrepreneur who has been writing professionally since debuting at age 11 in the pages of the Comics Buyers Guide. An honors graduate of the University of Southern California masters program, he has written over 50 books including the best-sellers The Arimathean, Every Number is Lucky to Someone and We Are All Characters.
See More Articles From Sean Leary
Advertisement
Tagged: Circa '21Circa 21 Dinner PlayhouseDistrictMusic ManRock Islandtheater