QC native Soultru will release his EP “The Truth” with special performances from Jim Swim & Kumate on September 24 at The Redstone Room! 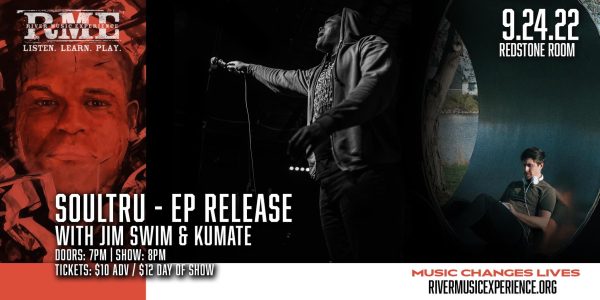 After “The Truth” EP was released Soultru was unable to host a proper in-person release show and the time has come to celebrate! This project was released in October of 2020, a 5 track EP (4 acoustic recordings as well as 1 full band recording). Soultru will be bringing some friends to come and play some of your favorite songs from the original artists, as well as premiering some unreleased music.

ABOUT THE ARTIST & OPENERS

Soultru |
Soultru is a soul acoustic artist based in Davenport, Iowa, a part of the Quad Cities, Iowa/Illinois. He has signed to Kansas City label The Record Machine. They sometimes travel with a full band and as a duo or solo (Terrance Banks).

They have had the pleasure of opening for artists such as Kweku Collins, Magic City Hippies, Michigan Rattlers, Neil Hilborn, Ceschi Ramos, Kaleb Mitchell, and shared The Alder Theatre stage with Amythyst Kiah in June 2021.

Soultru ended 2021 strong, playing essential festivals such as Alternating Currents in the Quad Cities, added to the Barrel and Flow Fest in Pittsburgh, PA, and Lincoln Calling in Lincoln, NE.

Jim Swim |
Artist/producer Jim Swim blends alternative hip-hop, indie soul, and bedroom pop to craft warm and wavy songs that move head and heart. Swim’s songs unwind like good conversation, moving from the everyday to the abstract, the personal to the universal, with honest ease. His original beats, unique flow, and lyrical insight reward repeated listens and have won him an underground following that continues to grow.

Kumate|
From a bad inside joke, the talents of Jerra Williams and Gustavo Villalpando were brought together. The Midwestern duo brings a unique blend of R&B, Jazz and, Soul with a strong influence of Latin, Afro-Cuban, progressive, hip-hop, and house music. Starting out playing in a local jazz fusion band called “Phat Katz Fusion”, the duo got praise and encouragement from the drummer and band leader to write more original material. Phat Katz Fusion fell apart due to the band leader falling ill. The duo was stranded. They began taking odd jobs here and there, starting a cover band “BAP”, but the duo couldn’t capture the same satisfaction as before.

In late October 2019, they regrouped and formed “Kumate” the name comes from the purposeful misspelling of the Japanese martial art “kumite” at type of practice in karate that involves “grappling hands”.

Heavily influenced by martial arts ideology, the 2020 EP release of “The Karate Kata” explores a handful of ideas related to the ‘flow’ of kumite: simplistic melodic heads backed by rich piano harmonies, deep grooving bass, solid drums, and extended solos. Their newest single release “Fantasy” from the upcoming EP release of “69 Chambers” takes on new sound, showcasing a more inclusive and communal sound grounded by deeper groove pockets, lifted by the voice of Tiana Thakur and cut by the bopping of the Trumpet player Demetrio Lyle. Splash – rovi.

Age Restriction: 19+ (minors must be accompanied by an adult)

*** All tickets are general admission. Purchasing a ticket does not guarantee a seat. ***