Midwest Monster Fest 2020 is proud to welcome Rob Mello to their Sept 5th-6th event at The Rust Belt in East Moline, Illinois!

Rob Mello is an American actor best known for his role as John Tombs in the Blumhouse breakout film, Happy Death Day, which he’s reprised in Happy Death Day 2U. His first major role was as Ted Cole in the film adaptation of Nicholas Sparks’ “The Best of Me”(2014), and as Buford Granger in Badass 3 (Badasses on the bayou). He has since gone on to play in the Magnificent Seven 2016 (Antoine Fuqua), Heart, Baby! 2017 by Angela Shelton. Rob has worked across from such stars as Frank Grillo in the upcoming film, Into the Ashes. 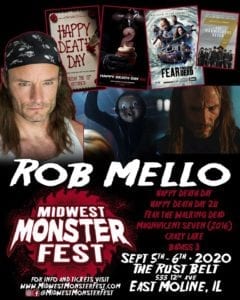 Born in Boston, Massachusetts, the son of a Traffic Manager, he spent most of his time in and around Everett, Massachusetts. He attended Catholic school and graduated in 1993. Among playing men’s volleyball and football, Rob also participated in the Drama Club snagging the lead role as Walter Hollander in “Don’t Drink The Water”. During one performance he forgot his lines. He flirted with a grandmother in the audience until he could recall them. Upon which he returned to the stage and resumed the scene. The audience loved it and Rob realized that he had a knack for improvisation. After graduation Rob enlisted into the United States Marine Corps, where he served as Shore Party. He became a 4-time rifle expert and gained significant combat training. After he was honorably discharged in 1997, he moved around the country working odd-end jobs.

Rob’s assent to a career in film acting was not a typical one. In 2012 while already working two jobs to provide for his family, he was just scraping by. Rob came across a Craigslist ad for an extra and decided to give it a try. Thoroughly impressing the director, Palomino, the audition landed him a leading role in the SAG short film “Dickie-Bird. Soon after Rob auditioned for the comedy short “Quicklime”. He fell in love with acting all over again. Rob enrolled in classes at Performer’s Studio Workshop in Tampa Florida, where he studied under Kathy Laughlin learning the Eric Morris process.

Get your tickets now at www.midwestmonsterfest.com