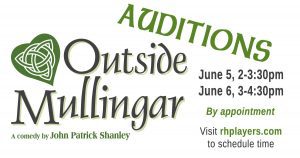 Richmond Hill is holding auditions this weekend for an Irish play.

The play, “Outside Mullingar,” is a 2014 romantic comedy about Anthony Reilly and Rosemary Muldoon, two introverted misfits entering middle age. Directed by Jennifer Kingry, the performance dates will be Aug. 5-8 and 12-15, 2021.

In the John Patrick Shanley (“Doubt,” “Moonstruck”) play, Anthony has spent his entire life on his family’s cattle farm in rural Ireland, a state of affairs that — due to his painful shyness — suits him well.

Rosemary lives right next door, determined to have him, but watching the years slip away. With Anthony’s father threatening to disinherit him and a land feud simmering between their two families, Rosemary has every reason to fear romantic catastrophe.

But, in a very Irish tale told with a surprising depth of poetic passion, these yearning, eccentric souls fight their way toward solid ground and some kind of happiness in a story that is funny, magical, and ultimately, deeply moving, according to a synopsis.