Terry: It’s not just promoting shows. It was learning the business side. I worked on the south side of Chicago when I was 15 stocking shelves in liquor stores. I drove a beer truck when I decided I was going to college to get out of Gary, Indiana. I came here and put myself through college bartending for four years. I picked the brains of a lot of guys in this business to learn it. I owned my first bar and restaurant when I 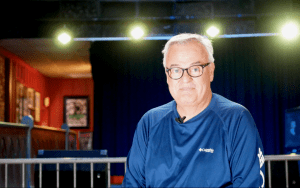 was 21. I had three bars in Iowa and I sorta got the bug of when this place came for sale. The mayor of Rock Island called me and said he had a downtown and that he knew I knew about bands in the bar business and he said I had a good reputation and no criminal record. So, he convinced me to look at buying RIBCO and helping them create the downtown and then from there we created the District. I fell into booking band very quickly because that was part of the gig. For what I didn’t know, I would call friends, I would call different people and what I didn’t learn they taught me.

E: That’s pretty rare that the mayor just gives someone a call…

T: He became the mayor and he wanted to get this downtown up and running. It had been sitting empty for 20 years. He knew there was probably a casino coming to town. He wanted to breathe some life into this downtown and city. We did it with the help of a lot of people that volunteered tons of hours. I made a ton of friends down here and they helped us out. The very first thing we created for the city was – besides RIBCO doing outside shows on their own – then we created the district which was Ya Maka My Weekend, Gumbo Ya-Ya, Motown Soul Festival and some other things. It was a lot of fun.

E: What are you most proud of at RIBCO?

T: Well the building and property and the history of this place is amazing. To know it all, I mean it took me 30 some odd years to learn it all. The employees are probably what made it what it is. I was a crazy guy running around in circles every night screaming and yelling “We got to do this. We got to do that.” over and over. I’ve had some of the most amazing employees in the world. They taught me things. Sound guys helped out fighting with production companies and figuring out what kind of speakers to put in here and what kind of wedges to use. We had sound guys argue over adding horns to the PA for two years before they ever installed them. It was a blast. It was so much fun. It’s amazing the friends we still have forty years later that used to work here. I had some amazing, brilliant people that worked here. We were their stepping-stone. From college kids to sound engineers and everything else. I mean to be able to call agents in California and different people that would help you out and say “You should do this. You should do that. Look at this.” To have them just pick up the phone and call you back in a small secondary market and help you and give you pointers was amazing.