Most struggling businesses only had to deal with a global pandemic last year. 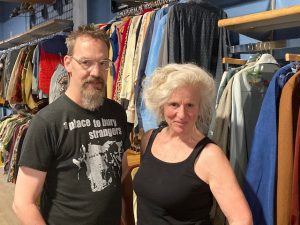 Herington and Heath have been neighbors in business together since 2008, now in their third location in downtown Davenport.

By the time of the mass shutdown in mid-March 2020, Ragged Records and Trash Can Annie’s in downtown Davenport were already closed about 42 weeks – forced out by the historic flooding in 2019. They’re finally ready to reopen at a new nearby building, 311 E. 2nd St., on Saturday, July 17.

“It’s been a dream come true,” Laura Heath – who owns TCA, the vintage clothing, styling and photography business – said this week of the totally renovated space formerly occupied by Abernathy’s, which moved in August 2019 to 432 W. 3rd St., Davenport. “We had a chance to rebuild and here is my true personality.”

She and Ragged Records owner Bob Herington (who were previously at 418 E. 2nd St.), by the Government Bridge, moved into the new location in June 2020, in the 1920s-era building 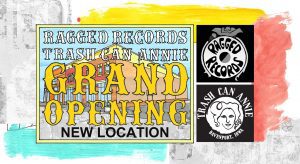 owned by Pete Stopulos of Ruhl Commercial, which was totally gutted and Stopulos built out the interior.

“It has all new HVAC, new flooring, new storage, dressing rooms, new bathrooms,” Herington said with pride. “It was just an empty concrete shell. He tore all the old windows off the front and put in new.”

Since spring 2021, the two businesses installed new counters, shelves and racks and fully stocked the place with a staggering variety of vintage (men’s, women’s and children’s) clothing, hats, accessories, and scrupulously curated vinyl albums (each hugged by clear plastic wrap). They were able to move and save nearly all their inventory before the downtown flood barriers breached at 3:30 p.m. on April 30, 2019.

For more on the businesses (which both buy and sell items), visit www.raggedrecords.org and www.facebook.com/trashcanannie.