Quad City Symphony Has Success With Virtual and In-Person Events

The past few weeks have been busy and unprecedented for the Quad City Symphony Orchestra, thanks to Covid-19.

The QCSO performed at Riverfront Pops in Davenport’s LeClaire Park. 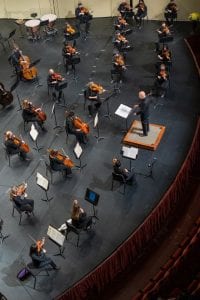 The Quad City Symphony Orchestra performing, socially distanced, on the stage of the Adler Theatre.

“It was an unbelievable undertaking,” he said. “It was a tremendous effort on the part of our staff and our volunteers. The amount of work it took to make the safety precautions a reality was a lot. On top of making sure it’s safe in the Covid pandemic environment, the threat of rain was the worst I’ve seen for this event.

“We had some of our space limited, due to city construction,” he said of the Davenport riverfront park. “There were a lot of obstacles, but we overcame them and we had a successful, safe show. The musicians did a great job; artistically, it was very good. It was a powerful event for us.”

In the park bandshell, there were 27 orchestra musicians (playing in mask under the baton of assistant conductor Ernesto Estigarribia), backing the guest Fleetwood Mac tribute band, separated by a Plexiglas barrier. The concert attracted 2,000 in the audience, Baxter said, and each party had its own assigned plot – varying in size for two, six or 10 people.

“We split it into zones, so to get one closer to the stage, you paid more,” he said, noting they also filled 105 of 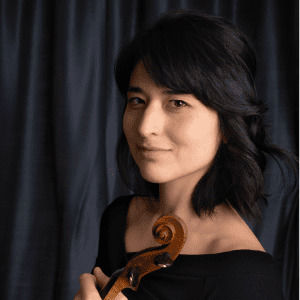 QCSO concertmaster Naha Greenholtz will solo in the Beethoven Violin Concerto in November.

The staff and volunteers had to trudge through the wet park the day before to set up, and Baxter said “it was by the grace of God” the rain didn’t call off the event. “It was harrowing,” he said. “It was very dramatic. We really needed a documentary crew following us. It was an epic story.” 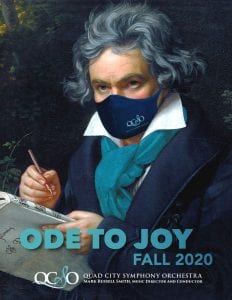 “The virtual soiree went very well,” Baxter said. “It was obviously very different; we didn’t have the energy of the room that we normally have. We did hit our budgeted goal.”

This past weekend (Oct. 3-4) had socially distanced concerts at the Adler Theatre – the longtime QCSO home which welcomed the public back for its first event since “Dancing With the Stars” in early March, Baxter said. They had 250 people on Saturday night and 150 for Sunday.

For the first time, the orchestra is providing digital access to its Masterworks concerts for 30 days (until Nov. 2 for the first one) for $40 per household. “A number of subscribers and ticket buyers did switch to the digital,” Baxter said, noting they’ve sold 219 so far.

“If you think about if you’re a couple and don’t want to go to the symphony, and switch to digital access, it is cheaper certainly, than two tickets,” he said of the filmed concert, streamed online.

The Adler can seat 25-percent capacity at maximum (or over 600), but the reality is, that relies on several groups of four, Baxter said. People from different orders had to be separated in the hall.

“It’s keeping all the groups disparate,” he said of the intermission-less program. Patrons, the 40-person orchestra and music director Mark 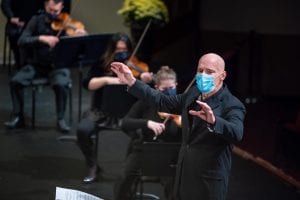 Mark Russell Smith conducts the QCSO wearing a mask at the Adler this past weekend.

Among the new theater protocols are: 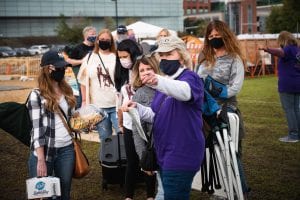 It will be the same set-up through December for Masterworks, Baxter said.

“The audience, people I spoke to were tremendously appreciative of the opportunity to enjoy music safely,” he said. “We had 100% compliance with the mask requirement. We had announcements about it, reminders when people walked in, reminders to stay distanced 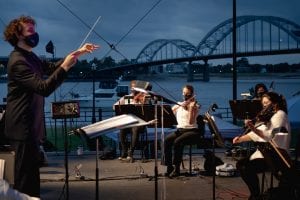 from other groups. It’s a pretty darn safe environment, especially when you’ve got everybody masked. That’s our top priority.”

This past weekend’s program (highlighting Beethoven’s First Symphony) was about 70 minutes, which is the approximate length for the next Masterworks, Nov. 7-8. That will feature a Bela Bartok piece and the Beethoven Violin Concerto, showcasing Greenholtz.

“It’s an interesting position to be in,” Baxter said of planning concerts during Covid. “We’ve never had to think this hard about every little, itty-bitty aspect of the concert experience, both for the patrons and the musicians. So it’s a lot of work and it’s taken since May – we’ve had this coronavirus task force assessing all the risks.

“There are precautions we can put in place to make the working environment safe for musicians, and the experience safe for the patrons,” he said. “There’s been a lot of feedback that’s gone into this. Again, the Scott County Health Department has been very generous with their time, to help us and inform all of our precautions. It’s a team effort.”

The first Masterworks should be re-broadcast on WVIK on Sunday, Oct. 18.