Quad-Cities World Premiere Opera in Moline is a Flawless Triumph

The old saying, “All good things come to those who wait,” had deeply resonant meaning Saturday night, with the triumphant, flawless world premiere of the opera “Karkinos” at Moline’s Bartlett Performing Arts Center.

In collaboration with Living Proof Exhibit, the Quad City Symphony Orchestra commissioned local composer and Augustana professor Jacob Bancks to create the opera, which aims to provide hope and celebration for those with cancer and all who love them. It’s the first opera premiered by the QCSO in its 107-year history.

Inspired by direct conversations with over 30 Quad-Cities residents and caregivers impacted by cancer, this emotional, transcendent work — featuring chamber orchestra, vocal soloists, dancers, and choir — depicts the story of a beautiful empress who is forced into battle with the unseen monster Karkinos the night before her coronation. 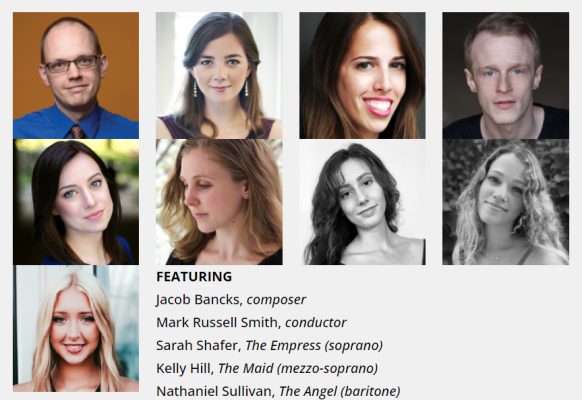 The new opera, amazingly both music and words penned by Bancks (a prolific composer and Augustana associate professor of music), was first scheduled to be done May 10, 2020 at Bartlett Performing Arts Center, at Moline High School. It was forced by Covid to be postponed twice, and one of the central messages of the fairy-tale allegory – patience is a virtue! – held profound meanings on many levels (enduring cancer treatment, Covid, and performance delays).

I have followed the long, complex process of bringing the opera to life, since it was announced in early 2019, and it was a special, immensely satisfying thrill to see the livestreamed performance.

Though it would have been truly electrifying to be there in person, the online version may have been even visually better – like the filmed version of “Hamilton,” I got to see many angles of the production that you’d never see in the theater (such as from above, closeups, and the orchestra). Kudos to the QCSO for another smooth, professionally filmed job. 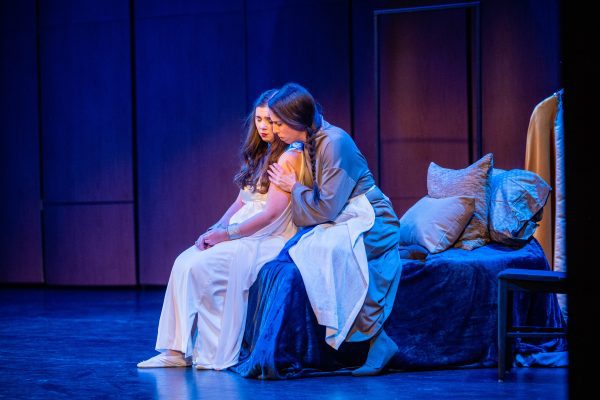 Though the delayed premiere meant that performers got to prepare their music for much longer than expected, the 90-minute opera only brought together all performers for six days of rehearsals before Saturday night’s one and only performance.

Director Shelley Cooper said Sunday that the singers were only able to practice with the 15-person QCSO (under music director and conductor Mark Russell Smith) for two rehearsals, and she’s never put together a production that fast. But everything proceeded with the utmost precision and care.

The stellar cast was comprised of soprano Sarah Shafer as The Empress (who represents someone battling cancer), mezzo-soprano Kelly Hill as The Maid (representing cancer survivors), baritone Nathaniel Sullivan as The Angel (symbolizing the medical community), and University of Iowa dancers Kara Bouck, Hanna Schaeffeler, and Emily Trapnell (representing townspeople and Karkinos), choreographed by Kristin Marrs, a friend of Bancks.

An on-stage chorus (half on each side of the stage) was made up of the passionate 16-person Augustana Choral Artists, led by Jon Hurty, who sang bass in the group (dressed in black, with black masks). The choir represented both subjects of the Empress and the monster Karkinos, itself symbolizing cancer (the word is Greek for cancer). 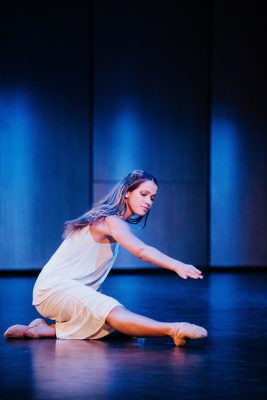 A dancer in the opera “Karkinos.” (photo by Evan Sammons)

Under an impossibly tight time-frame, this all-star cast came together beautifully and seamlessly, just when we all needed it most. It was incredibly impressive, moving and powerful – overall another representation of the title of Living Proof Exhibit’s annual exhibition of art by cancer survivors, “A Visualization of Hope.”

As opposed to static works of art, this visualization of hope was a fully-realized dramatic, intensely affecting journey – a completely sung-through triumph of hope over evil, but only after a terrifying, dark and stormy night of the soul.

“Everyone was really professional across the board,” Cooper said, noting she attended a handful of Iowa City dance rehearsals before the formal Moline rehearsals began. “The orchestra was fantastic. It should have gone a lot worse and it really didn’t.” 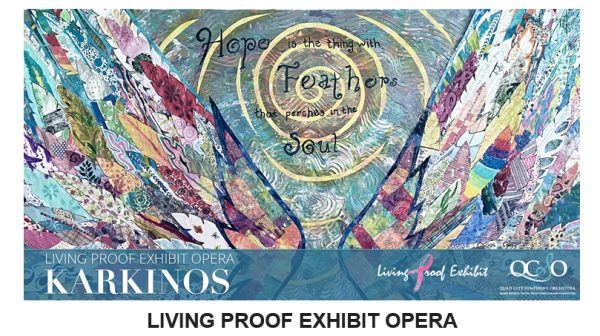 “The collaboration was never stressed; everyone was prepared,” she said. “Everyone came to rehearsals with their A game. I wasn’t dealing with difficult personalities. We couldn’t have asked for a better cast. They’re all at the top of their field, their ability, and they were all so nice.”

Like Cooper (herself an operatic singer who’s performed around the world), this was the first world premiere opera for the Q-C, and what made it extra extraordinary was that Bancks also wrote the libretto (or book) of the story. This was his first opera, and man, was it an astounding, sensitive, heart-wrenching debut. 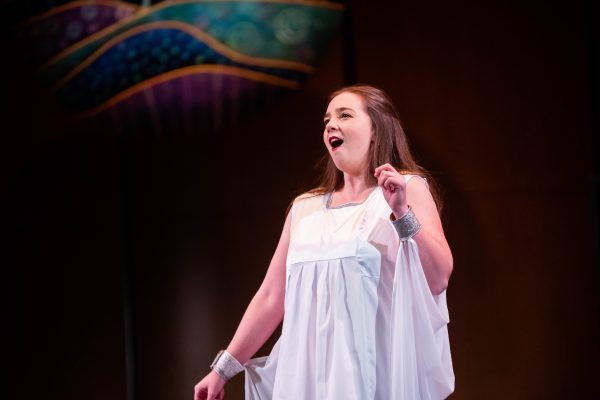 Sarah Shafer as The Empress in “Karkinos.” (photo by Evan Sammons)

“I will never forget my first meeting with him, prior to any interviews, he had such an understanding of what ‘Karkinos’ could be,” Pamela Crouch, former LPE executive director, and a four-time cancer survivor, said Sunday after seeing the opera in person (her first in-person show in two years).

While it was deeply emotional for survivors like her to see the cathartic, difficult road that the Empress takes in the story, Bancks made sure to not simply put on a happy face to the gripping tale.

“Cancer is not pretty; cancer is hard,” Crouch said. “Not everyone survives cancer. Jacob was very thoughtful about handling that.”

In the world of opera, it is very rare for a composer to also write the libretto, but Bancks proved highly adept at the task, and it shows in “Karkinos,” which does not utter the word “cancer” once. The fantastical, timeless tale is told entirely in allegory, as the Empress is preparing for her long-awaited coronation.

Bancks’ text is utterly fitting for the colorful setting, as the stunning, soaring Shafer sings of her dominion: “Your lands are jewels without number, with sapphire seas, beneath the silver mountains, and this, your greatest city, bright as crystal.” 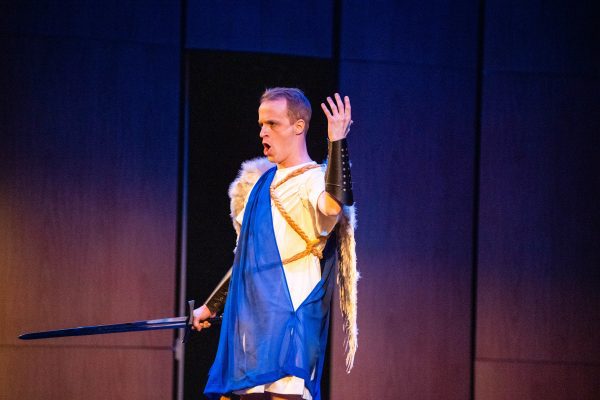 Nathaniel Sullivan as The Angel in “Karkinos.” (photo by Evan Sammons)

One of many tense, traumatic moments in the story is when Sullivan enters and warns the monarch of a fateful obstacle being put in her path. And symbolizing the journey of cancer survivors – who are treated and supported by invaluable healthcare workers – the Angel sings: “No army may fight in your place, nor may you choose the day or the hour. Tonight, the evil, invisible monster Karkinos comes for you.”

The taunting, unfeeling chorus is literally not invisible, but sings off to the sides while holding their music, and much of their give and take with the Empress is spoken or shouted.

Bancks strongly conveys the chaos and confusion of cancer treatments and life-and-death struggles, and Shafer nails the part in which her very mortality is at stake.

She sings in pain and self-doubt: “Part of me is lost. Can the whole world change in an hour? I thought I knew who I was, and who I would become. But I am not, will never be an Empress. How cruel the gods must be.”

In a comforting, inspiring high point in the opera, Hill wistfully unfurls her Maid’s Song, imparting the wisdom of her late father (a farmer), who was felled by Karkinos.

“Slowly, slowly, what is your hurry?” she implores the Empress. “Little by little a bird builds a nest. Patience obtains all things. Even when dragons are near, carry on. Wait and rest and hope and watch for the dawn.”

Sullivan’s Angel aria continues the metaphor, offering hope as the thing with feathers (a famous Emily Dickinson line, not sung here), imagining the Empress as a nightingale. 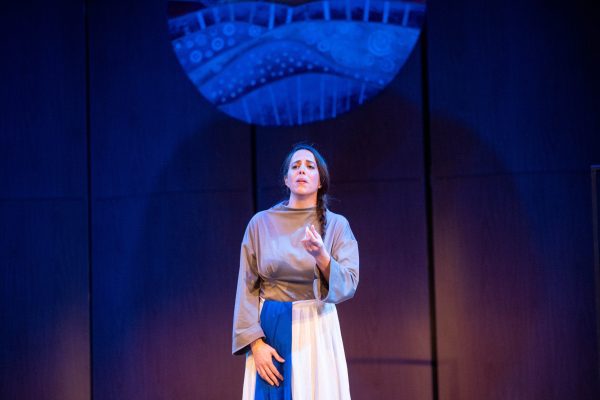 Kelly Hill as The Maid in “Karkinos.” (photo by Evan Sammons)

“Deep in the forest, under the darkest night, beside a stream, a nightingale is singing. Dragonflies whisper below her, while angels guard above,” the Angel sings.

“Here will she sing forever. She knows no song of sorrow, she has no fear of monsters. Her peace is perfect peace.”

Crouch rightfully noted how impactful the words and the music are to anyone who’s experienced cancer. LPE’s mission is to offer the therapeutic benefits of the arts (for free) to anyone touched by cancer.

“There were multiple times that hit me with her,” she said of the spectacular Shafer. “Not only did she have a glorious voice, just how she embodied the part. After being told that Karkinos was coming, she collapses, it was wow…She says, ‘What have I done? Why me?’ It was heart-wrenching.

“The audience, when she was singing that, the entire audience was invested in that,” Crouch recalled. “Like everyone was leaning into her. It was just so powerful. The fear, the panic, every emotion she went through – when she loses her words, I have felt every single one of those.” 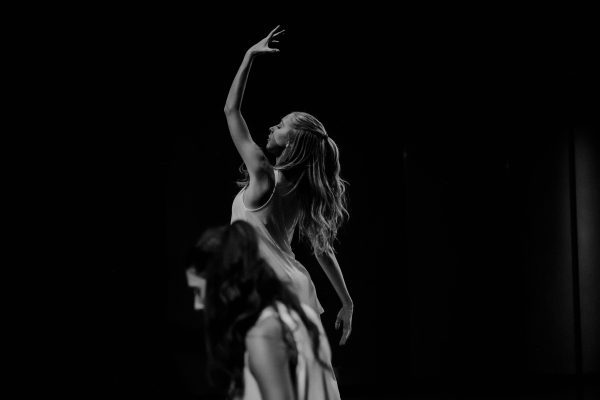 A dancer in the world premiere of “Karkinos.” (photo by Evan Sammons)

She even noticed that when the talented three dancers wore black sashes, representing the monster, they contorted themselves and took on threatening expressions, to evoke the menace of cancer. The women’s graceful, flowing movements added so much to the opera, their wordless expressivity saying so much without uttering a word.

Crouch also appropriately called the opera “an emotional rollercoaster,” and Shafer aptly personified the strength, courage and perseverance of cancer survivors everywhere. Hill and Sullivan equally dazzled in the heft, energy and force in their voices.

It was an honor to see this premiere, and even if you missed it Saturday (500 people were there in person), the QCSO generously is making the filmed version (which includes subtitles) available for viewing online through March 14.

Household digital access is only $25, available HERE. You can even see the libretto HERE.