There’s no place like the Raven’s Grin Inn, about an hour north of the Quad-Cities, and Joshua Bentley of East Moline is helping make sure that the unique 19th-century mansion stays open in the future.

The leader of the goth rock band Pitch Black Manor, Bentley is assisting the closed year-found attraction with fundraising. If you donate at least $5 on Raven’s Grin Inn’s Paypal, get a free download of the band’s Halloween-themed album “Monster Classics,” which was released

The Q-C band Pitch Black Manor is donating a free album to anyone who gives at least $5 to Raven’s Grin Inn.

“This is a culturally relevant experience near the Q-C that needs to stay in business,” Bentley said recently of the huge 1865 house in Mount Carroll, Ill. “If you have not heard of this place, it is mind-blowing.”

When he first visited in the late ‘90s, he said: “We stumbled onto a living art project that had manifested itself as an all-year haunted house. The rest is history, I’ve brought most if not all my close friends to this place to share in its morbid glory. Support them in their time of need and

give their post a read. This house needs to stay open as we are running out of true authentic experiences in our world.”

After 33 years, Raven’s Grin will be closed for its first Halloween season, because of Covid-19.

“Like so many others due to Covid, we shut down in March, hoping of course that by October, our busy season, things would potentially be at 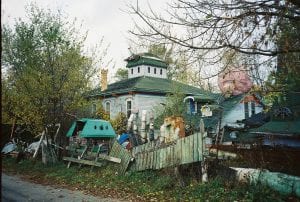 Raven’s Grin, in northwest Illinois, attracts visitors from all over the country.

a point where we could re-open and continue to entertain and delight our customers,” owners Jim and Jessica Warfield wrote on their GoFundMe campaign site, which has raised over $3,000 as of Tuesday.

“Unfortunately, things have not improved and re-opening is currently not an option. And while state regulations have said this type of business may not resume, we also personally would not want to potentially jeopardize the safety and health of our customers, our employees or ourselves.

“Financially, not being open during the spring and summer set us back, however now losing the fall, our future is looking a little more uncertain than before,” the Warfields wrote. “Many of our customers have asked how they could help, and until this point (when we thought there was a chance of opening for Halloween) we were doing merchandise sales. Once it was apparent we would not be opening for October, it was 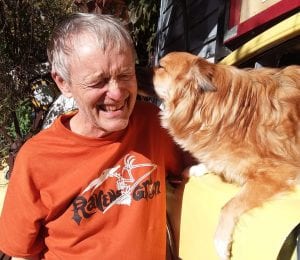 suggested we start a GoFundMe.

“This is awkward for us, and I cannot tell you the deep level of appreciation we have for those who are trying to help or who even offer kind words of support,” the site says. “If you are able to donate, rest assured every cent will be used by us to continue towards the goal of re-opening. We may not know when that will be (everything is so uncertain for everyone right now) but it WILL be happening.”

The Warfields, who typically would open to the public year-round 7 p.m. to midnight, averaged about 3,000 paying customers a year, including many from the Q-C area, Jessica said Monday night. They live in the former inn as well, which Jim bought in 1988 for $3,000 and put a lot into renovating. He’s 71 now. 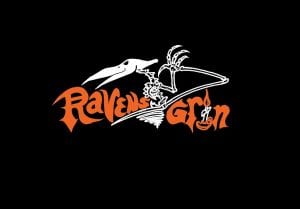 The Raven’s Grin logo is available on shirts for sale.

They usually would employ up to 15 people to help do tours during the busy October season, Jessica said. They’ve had visitors from every state (plus New Zealand, Japan and Puerto Rico), and one family planned to come from Texas, to bring their fifth generation to Raven’s Grin, she said.

“When we get kids, we do everything we can to make it extra interactive — let them push the buttons,” Jessica said, noting that buttons make certain props move. She first visited the house in 2001 and has been married to Jim for 16 years.

“He mixes the humor in more than scares,” she said. “If you get scared, you see what it was, it’s so ridiculous that you laugh at it…It’s got all his art work; he’s built everything, including a secret passageway, and slides in the house.”

Chicago magazine wrote about it in 2010: “Sitting in the pitch-black parlor of Raven’s Grin Inn in Mount Carroll, Illinois, I’m thinking this is how horror movies start: A head-smackingly clueless woman wanders into a place that ends up being infested with chainsaw-massacring psychopaths. This is the part where I roll my eyes at the movie screen, because anybody that stupid deserves to have her brain eaten by zombies.

“On Halloween, people camp out at Raven’s Grin waiting for the owner, Jim Warfield, to escort them through the four-story, 15-plus-room monument to the macabre.”

“There are lots of buttons and mechanicals in Raven’s Grin,” the piece said. “Stone walls swing back to reveal labyrinthine passageways. Warfield’s beloved Nosferatu Santa answers Christmas wishes with a bit of ghastly animatronic humor. Each room is a combination of outsider art installation, musty theme park, and grisly freak show. ‘Welcome to the tanning salon and beef jerky machine,’ Warfield says as he rounds a corner. A mannequin the color of a roasted holiday ham starts screaming.”

A 2019 review at hauntedillinois.com said Raven’s Grin is “truly a one of a kind house” and that each time, “the house and Jim has never let 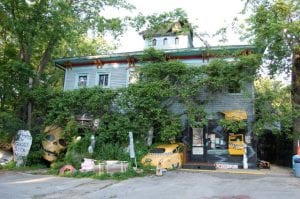 Raven’s Grin Inn in Mount Carroll, Ill., was originally built in 1865 as an inn and tavern.

In an October 2019 Facebook post, the Warfields wrote: “First and foremost, we do not in any way belong on a list of places ‘to scare the crap out of yourself.’ Yes, some people can get scared here and we even have a few scares set up, but we are more concerned with people having a good time and if we do get a scare you laugh after. Think fun house vs. horror house.

“Second, this house is from 1865 and has some haunted history, but nothing that warrants calling us ‘the most haunted place in Illinois.’ Has there been activity or things which cannot otherwise be explained? Yes, there have been a few events which we talk about during the tours, though in more detail off season than the busier October but it is not the primary focus of what happens here at the house. Most of these events have happened years ago from previous occupants and even some of our customers.”

Jim said Monday that there are actually seven levels to the home, which includes a  huge underground wine cellar with a big stone arch ceiling. When he bought it, the property in the middle of cornfields had been a multi-apartment building, with no running water or electricity.

He had to rewire the whole place and put in new plumbing. Their closure this year has allowed the couple to do more repair and upkeep,

The Q-C band Pitch Black Manor is donating a free album to anyone who gives at least $5 to Raven’s Grin Inn.

Jessica said she was speechless and deeply moved by the community support.

“We didn’t want to put our hand out and just ask; we were hoping to be open in October,” she said. “When Josh contacted me, the idea of doing fundraiser with them, it’s a nice symbiotic thing. Josh has been coming here for years.”

“You don’t know what to say, everyone is hurting, everyone has issues too,” Jessica said. “People still care about us, write about the good times they had when they’re here.” She has a part-time job doing computer transcription work to help pay the bills.

“It’s a humbling experience to not have much bank account in the middle of winter, but we’re not alone in that,” Jessica said, noting they may not reopen until there’s a Covid vaccine next year.

Pitch Black Manor (which formed in 1990) recently reunited, with bandmates Lyle Erickson, and Chad Fifer (now a well-known podcaster with the HP Lovecraft Literary Podcast; having such notable return guests as Patton Oswalt and Chris Sarandon). Now, 25 years after their last show in the Quad-Cities, “we found ourselves, like many, scrambling for some meaning and direction during the pandemic so we turned to our Quad-City roots,” Bentley said in July. 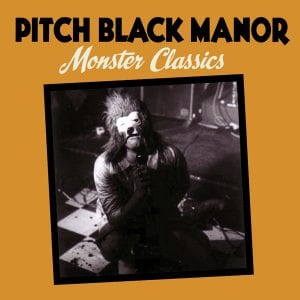 “Why Halloween? Why now? It’s simple: hope,” Bentley said over the summer. “Our themes are dark, but the light of creation and friendship through music allowed us to transcend distance.” Fifer lives in Los Angeles and Erickson lives in Des Moines.

“It was time to come back to the Manor and light the fire of hope for our much beloved Halloween,” Bentley said.

A review at Regenmag.com said the record “plays out like a soundtrack album to the greatest Halloween party known to man, where all kinds of spooky revelry abound while a marathon of horror cinema masterpieces plays on a continuous loop in the background.”

It described the music as “goth/rock and post-punk with a funky edge.” And throughout the album, Bentley’s voice “oscillates between unhinged and melodic, moving effortlessly from a baritone croon to terrifying screeches and shouts as he does on ‘Blasphemy’ and ‘Just Another Werewolf Song,’ the latter noteworthy for its touches of keyboard and sparkling acoustic guitar to evoke an appropriately moonlit haze,” the review said.

For more information on the band, visit pitchblackmanor.com. To contribute to Raven’s Grin Inn, visit www.paypal.com/biz/fund?id=U2JF3DEJ65GDN. You can buy a Raven’s Grin shirt on their Etsy page.