For Black History Month, Rock Island native Jonathan Burnett wants to educate people about a jazz legend from the Q-C whose son went on to become the first African-American governor of Massachusetts. 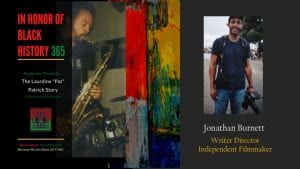 In honor of Black History Month, a new documentary on Patrick by Jonathan Burnett will be shown online Feb. 8.

On Monday, Feb. 8 at 6 p.m., the first cut of the short documentary, “The Strangeness: The Pat Patrick Story,” will be shown free on Facebook, through Azubuike African American Council of the Arts.

Much information has been documented on legendary white musicians from the Quad-Cities. However, less is known about the contributions made by African-Americans, Burnett said recently. “We know Bix Beiderbecke, but we don’t have anything about Pat Patrick.”

The 16-minute film (part of a planned longer feature) highlights the life and music of Pat Patrick, a prominent jazz musician who played with some of the biggest names in jazz.

“Pat Patrick was a very, very smart man,” the filmmaker (and executive director of Azubuike) said. “He played multiple instruments; he wrote music like on napkins. He worked with a lot of interesting people.”

“Just exploring the enigma, of who was Pat Patrick, is a great adventure,” Burnett said. “I’ve barely scratched the surface, I feel.”

Laurdine Kenneth “Pat” Patrick, was born Nov. 23, 1929, in East Moline, and he played baritone saxophone, alto saxophone, and Fender bass. He was best known for his 40-year association with composer, bandleader and philosopher Sun Ra. Despite his success, few people in the Q-C  know about this jazz legend, who was the father of former Massachusetts governor Deval Patrick, Burnett said. 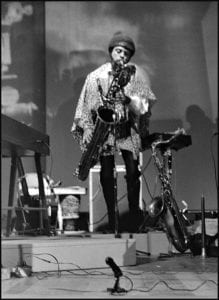 Patrick was known for a 40-year association with composer and bandleader Sun Ra.

Pat Patrick accompanied the Sun Ra Arkestra on several overseas tours, and appeared on a number of albums. For a time, he lived in Ra’s communal residences in New York’s East Village and in Philadelphia. Patrick also played with Duke Ellington, John Coltrane, and Thelonious Monk, among others. He was a founding member of Baritone Saxophone Retinue and as an educator, he taught at State University of New York—Old Westbury.

Burnett knew the jazzman was from Watertown in East Moline, but knew little else. He originally compiled the film while a graduate student at Loyola Marymount University in Los Angeles in 2016. A Rock Island High alum, he earned his master’s in film and TV production in 2018.

The idea of Pat Patrick came about from wanting to cover how blues, jazz and gospel music that Black people brought from the South to the Midwest, including Patrick.

Burnett’s LMU professor, Glenn Gebhard (an Emmy-winning film and TV producer), recommended that Burnett focus just on Patrick. Gebhard had met Deval Patrick, when he spoke at the university around the time he became the first African-American governor of Massachusetts. A 1982 Harvard Law grad and former U.S. assistant attorney general in the ‘90s, Deval was elected in 2006 and served as governor from January 2007 to January 2015.

Burnett’s professor urged him to explore the estranged relationship between father and son.

“Pat Patrick and Deval had never seen eye to eye on anything,” he said recently. “Pat Patrick, who’s this jazz musician, very Afro-centric, and 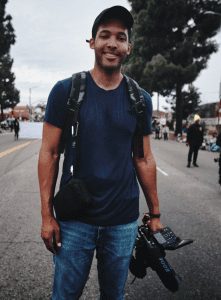 Jon Burnett is a Rocky grad and independent filmmaker based in Los Angeles.

Black power movement. Then you have Deval, who’s very involved in the social movement of Black people and civil rights, but he comes from a very corporate law, obviously politician background.”

Burnett said whenever Deval visited his father, they argued all the time.

“Deval was about finance, corporate law, politics, and Pat Patrick was like, down with the man, and fat cats,” he said. “They would always butt heads. I started to dive into it and as much as it’s about Pat Patrick the musician, I wanted to explore him as a person, as a father, and just explore that father-son dynamic – of having this famous Dad and more or less, growing up without him. That was the crux of the story.”

Burnett did an interview with Deval Patrick (in summer 2016 at Bain Capital in Boston) and one of his sisters, but that’s not in the version he’ll show Monday.

For a long time, Deval was angry and resentful toward his father, he said.

When Pat Patrick left his wife and family, on the South Side of Chicago, it was a very traumatic experience for Deval (who was born in 1956). At 4 years old, “he was trying to follow after his father, he was very sad because he didn’t know why his dad was leaving,” Burnett said. “His dad had a great amount of guilt for what he did, and he probably did it without thinking, but when he told him to go home, he turned around and he struck Deval and told him to go home.”

When Deval fell to the ground, his hands hit the sidewalk and he remembered his hands were hot and felt the burning of the concrete, 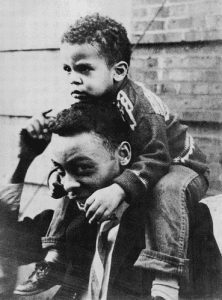 Deval Patrick as a young boy in Chicago, with his father Pat Patrick.

Burnett said. “And seeing his mother broken up about it, that imagery stuck with Deval and he’s always held it against him, for a very long time.”

Patrick refused to sign Deval’s application to the Massachusetts prep school Milton Academy, arguing that Deval would lose his African-American identity there, according to www.saxontheweb.net. Deval, whose tuition was paid by scholarship, was accepted anyway.

Deval saw his father only rarely during his life; the younger Patrick later attributed his decision to go into public service and improve the lives of others to his abandonment by his father, the website said.

When Deval had a child of his own, Pat Patrick became a grandfather, and Burnett told him, he was a much better grandfather than he was a father.

“He was OK with that,” he said. “Deval had done a lot of great things for himself, without his father and he was at peace with that. Because his father, in the last years of his life, was one of the best grandfathers to his children. For them to be able to receive that love from his father was more than enough for Deval.” 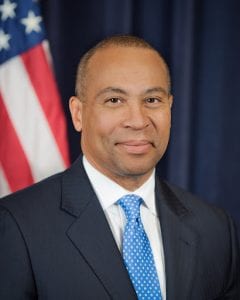 Deval Patrick became the first Black governor of Massachusetts when he was elected in 2006, and he served two terms.

Deval honored his late father’s musical and cultural legacy by donating a vast collection of his scores, photos, personal materials, and recordings to the Berklee archive.

“The Patrick Collection is like a time capsule showing the interaction of culture and history during a significant time in jazz,” according to https://college.berklee.edu/news/1620/massachusetts-governor-donates-musician-father-s. “The insights it offers are enormous.

“There are original scores, lead sheets, and arrangements by Patrick, Ellington, and Santamaria. Hundreds of photographs and negatives show Patrick on tour, in the studio, with his family, and with associates like Monk, the Baritone Saxophone Retinue, and Clark Terry.”

Personal material consists of concert programs, royalty statements, family correspondence, and a notebook in which he ponders sharing the realities of a jazz man’s life with his SUNY students.

“The collection has immense historic and research significance for scholars, music theorists, educators, and artists,” the college said. “Performers will be able to play the scores. Many of the personal papers tell the stories of both jazz and Patrick. Included is ledger book from El Saturn Records, Ra’s label, in which Patrick tracked album sales from 1957–59; a scrapbook of his music jobs in Chicago during the 1950s; and a recording of Patrick playing trumpet at the age of 10. Original articles display his militant opinions and give insight into his ideas and philosophies.” 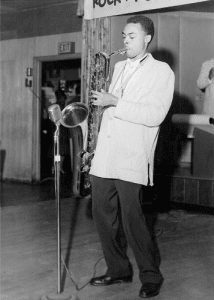 Burnett worked with Berklee professor Bill Banfield on the film, who also has a connection to Deval Patrick, 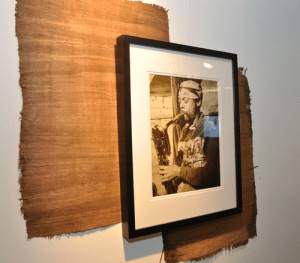 This photo of Patrick performing with Sun Ra is among about 2,000 photos at a Berklee College of Music collection devoted to his career.

since he married Deval’s cousin.

“He’s just a big jazz guy and ethnomusicology professor, a PhD, and Afro-centric music,” Burnett said. “He’s the guy to talk to. He also provided a lot of the music for the documentary.”

“It was a great experience working with him,” he said. Burnett researched the Patrick archives at Berklee, noting someone in the Quad-Cities drove a lot of that material to Boston.

Burnett got some footage of the collection at Berklee, including news clippings.

Banfield told him what he saw was only a quarter of what was there, and Burnett wants to return to scan most everything for a feature-length documentary on Patrick.

In an NPR interview with Deval Patrick from 2010, the son said his dad was a pack rat. He kept notes, playbills, recordings and record albums he’d acquired during his life as a touring musician.

When the saxophonist died in 1991, boxes of his things were left unclaimed in a Q-C storage unit. They narrowly avoided the Dumpster on several occasions. But when the owner of the storage unit read that Deval Patrick was elected governor, he called him about the boxes. 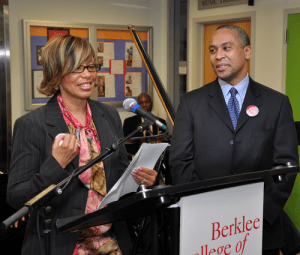 Deval Patrick with his sister Rhonda at the March 2010 dedication at Berklee of the Pat Patrick Collection.

“[The storage unit’s owner] drove it from East Moline, Ill., to Boston — these boxes of real treasures,” Patrick said. He poked through the boxes and was astounded by what he found, NPR wrote.

“There were thousands of photographs,” Deval said. “There were photographs of his concert tours, of his family … of almost every concert where he had a camera.”

Patrick saw his father play live many times, but said one of the most memorable was on his 25th birthday.

“He was performing at a jazz club in Northeast Washington [D.C.] called Pigfoot, and he asked me to come by,” Patrick told NPR. “I sat at a little table by myself, and he saw me come in. He said, ‘I want to dedicate this next number to my son, whose birthday is today.’”

His father then played the jazz standard “I Can’t Get Started,” and according to Deval, it summed up their relationship perfectly.

“He played this incredibly soulful solo, and we just locked eyes through the whole thing,” Deval said. “That was the best and most meaningful bridge for the two of us in finding a place for each other.”

Deval Patrick, now 64, briefly ran for the 2020 Democratic nomination for U.S. president, and withdrew from the race in February 2020, after having jumped in just three months earlier. He was a close ally of former President Barack Obama. 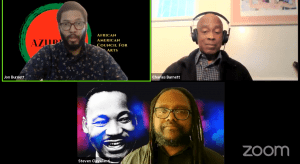 Burnett said he’s unsure what the timetable will be for the full Pat Patrick documentary.

“It’s up in the air – that’s how docs are. Once you get on one trail, it just leads to another,” Burnett said. “You have to leave no stone unturned, so you got to just look into every lead, into everything, and just find the story. I think the story as far as not only Pat Patrick and Deval’s relationship, but Pat Patrick as a person, as a musician and as a father. That’s kind of what I’ve been sticking to.”

Burnett also interviewed David Baker, general manager of radio station KALA-FM at St. Ambrose, for the documentary. The film is a blend of both Patrick’s personal story and his work in jazz. 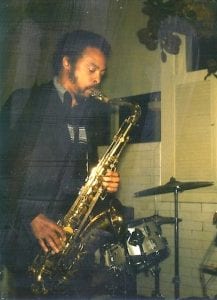 “The message when we say Black History 365, it’s been said around social media a lot, is to let people know that although we’re going to premiere it during February, it’s a fact and a reminder that Black history is American history and it happens all the time,” Burnett said. “It’s the ongoing message that Black history is year-round.”

“A King in Paradise” is a film – now in pre-production and fundraising — that explores Dr. King’s untold journey, five days in Hawaii during September 1959, from a multi-generational perspective.