For a blissful few hours on a sun-kissed Tuesday in downtown Davenport, there was finally no coronavirus, no social distancing, no masks, no worries. 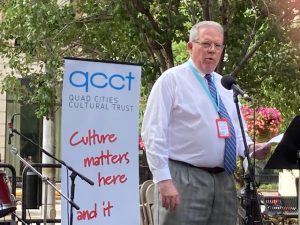 Scott Van Vooren, board chair for the Quad Cities Cultural Trust, spoke to the crowd.

There was a heavenly sense of normalcy outside River Music Experience at 2nd and Main streets, as the Quad Cities Cultural Trust (QCCT) presented a free four-hour festival – “Paint the Town” – as it celebrated exceeding its ambitious fundraising goal with its six funded partners.

Representatives from those invaluable nonprofit groups – RME, Quad City Botanical Center, Quad City Symphony Orchestra, the Figge Art Museum, Putnam Museum & Science Center and Quad City Arts – were all out spreading the love and joy and sharing some of what makes the Q-C great: a bountiful, still blooming arts and culture scene, with fun activities for people of all ages.

“It is just incredible,” QCCT board chairman Scott Van Vooren said of the Tuesday gathering of all the partners. “This is what the Cultural Trust is all about. What really amazes me is, all this 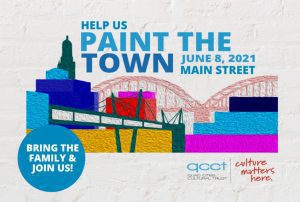 happened during the pandemic. There are a lot of very generous people in our region.”

The big 2020 push came after an historic 2019, when the trust distributed more than $1.1 million — a 21% increase from the year prior. It typically makes grants in the spring, and funding for each partner varies each year, based on 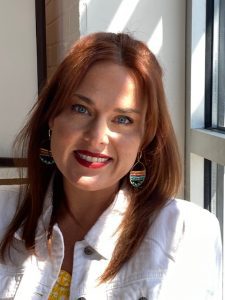 The QCCT had been an anomaly because it was a privately-funded entity until 2019, when it formally launched its first public campaign, said Jen Dobrunz, executive director since August 2019.

In past years, the QCCT has typically made grant awards in June, but this year that was moved up to May, to give them more clarity, since fiscal years usually start July 1. The six funded partners recently received a total of nearly $1.3 million from QCCT.

Tuesday’s family-friendly “Paint the Town” event – at RME on Main Street, closed off between 2nd and River Drive – aimed to honor the unprecedented success of the trust and its partners.

“This is a special evening,” Van Vooren said to the assembled crowd from the stage. “One of the remarkable things about the Cultural Trust is that the board always has a seat for each of its six partners. Not only do I serve as the chair of the Cultural Trust; I also serve as a board member of the Quad City Symphony Orchestra.

“This way, that allows each partner’s identity to remain with the Quad Cities Cultural Trust as we proceed and as we met our $32-million fundraising goal,” Van Vooren said. “Tonight is possible because of the tireless work of our campaign committee. On behalf of the Quad Cities Cultural Trust, I want to thank each and every member of the campaign committee.”

“We reached the goal of $32 million in fundraising in 2020, one year ahead of schedule, during a pandemic,” he noted. “Just an incredible job.” 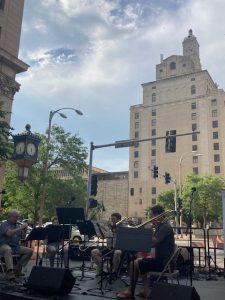 Van Vooren credited the late Ascentra Credit Union CEO Dale Owen, raising $510,000, which was matched dollar for dollar, totaling over $1 million, “all because of Dale’s big idea,” he said.

He thanked co-chairs Chris Beason and Linda Bowers for completing the campaign. 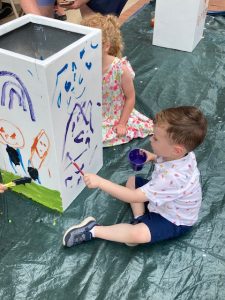 Connor Baxter, 3, painting a planter on Tuesday during “Paint the Town.”

It would match every $1 given up to $500,000 to support art and culture programs in the Quad-Cities through QCCT. The collaboration created by Owen among the financial institutions was unprecedented, Dobrunz said. Owen died at age 52 last November and his widow Angela was at Tuesday’s fest. 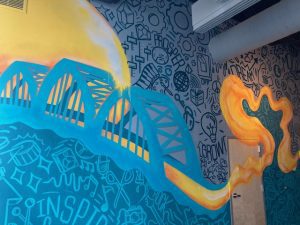 A new mural at Underground Economy (on RME’s second floor) was painted by Brandon Nees of Davenport.

“I write so I don’t lose myself,” Altease said in his emotional poem. “To be the light for the people that’s feeling hopeless.”

“I realized I was planted, not buried in the ground,” he said. “All that really means is, I have life because I am a seed, and the soil is the evidence of the things that are not seen.”

“It’s energizing, to see so much talent, so much generosity in one place – it’s powerful,” said Ryan Wille, executive director of the Rock Island-based Botanical Center. “There’s a lot of valuable resources here for the community.” 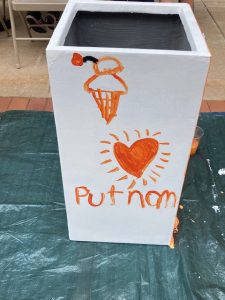 One planter reflected passion for the Putnam Museum & Science Center.

planters that the Botanical Center will fill, and one each will be placed at the Cultural Trust partners, and offered to other major donors in the community.

“It’s great, to have all the Cultural Trust entities here; the weather couldn’t be better; the music, the art,” said Brian Baxter, QCSO executive director, whose kids Connor (3) and Mary Charlotte (5) had fun painting.

“Paint the Town” also gave RME and Quad City Arts a chance to show off a permanent painting, the mural completed last November on the Main Street side of the historic 1892 Redstobne building. 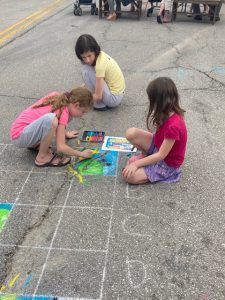 Dobrunz and leaders of the QCCT funded partners met in January at RME to celebrate exceeding the campaign goal and completion of the new mural created to frame the Main Street entrance of the building.

The huge, colorful mural – led by artist Sarah Robb and Quad City Arts’ Metro Arts program – aimed to visually represent all the QCCT partners. It was made possible by an anonymous donor to the trust.

“Our Main Street entrance has always been an area we felt needed more attention, and thanks to the Trust’s support and Quad City Arts’ team of young artists, we were able to bring something unique and colorful to our primary entrance,” he said. 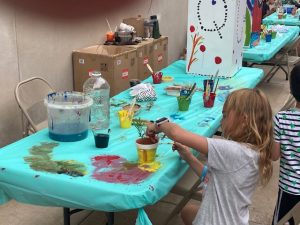 Painting a flower pot on Davenport’s Main Street during “Paint the Town.”

“And the fact that it is so representative and all-encompassing of the Trust partners makes it all the more special.”

“It’s amazing, and honestly this area is great, because we get to highlight the mural,” Kevin Maynard, Quad City Arts executive director, said of Tuesday’s event. “It’s just nice to get outside, get everybody together and be able to celebrate the milestone, create some art and just do some fun stuff.”

Davenport mural artist Brandon Nees recently completed a new mural on the RME second floor, at the Underground Economy, which had its ribbon-cutting June 4. 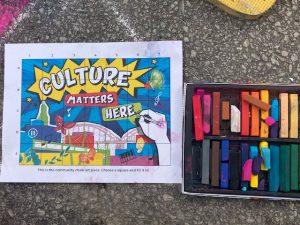 Chalk art for a “Culture Matters Here” mural, the slogan of QCCT.

Danner said last Friday’s big open house for the four-story building – including the first free Live@Five outdoor concert and opening of the new Zeke’s Island Café at RME – was packed.

“People are dying to get back out,” he said. “When I said, thank you all for being here tonight, and they just erupted in applause. This is a good audience.”

Tuesday’s event was “long overdue,” Danner said. “It’s given us all a little bit of energy, to get back out. It was a hard year for people who work in this industry. We kept pushing and we hung in there. All of us in arts and culture were getting to the breaking point, so when things finally opened up, there’s this huge sigh of relief.”

“It’s really great to get everyone together – even Mercado and the Farmers Market,” he added.

“It’s cool to be able to partner with other organizations, too.”

“I think it’s wonderful, since we all work together so closely,” said Figge executive director Michelle Hargrave. “Why not present a unified front for what we’re doing?”

The event was a tangible demonstration of what the Cultural Trust does, and what the partners offer to the area.

“I think it’s great to celebrate these milestones and put what our mission is out there,” Hargrave said. “It’s 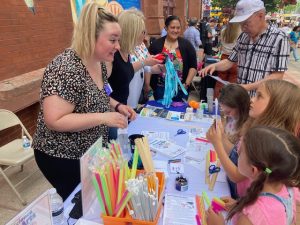 Lakin Sheeder, an education specialist for the Putnam, worked on science activities with kids on Tuesday.

nice to see everyone as well. To emphasize how important culture is to the Quad-Cities, especially coming off something that happened over the weekend – to emphasize the great things that happen in the area is really important.”

Overnight in the early morning hours of June 6, the landmark art museum had 10 of its Main Street-facing windows shot out from the top of the Redstone parking ramp, next to RME.

“It’s expensive and it’s also going to take several months to replace them,” Hargrave said. “I’m grateful it was the east side as opposed to the north or south. It’s a shame, but I’m also grateful that it didn’t destroy any of the interior glass, so we didn’t have any security or environmental concerns.

“It’s just senseless and it’s a shame,” she said of the shooting. “It could have been worse. I’m grateful to the mayor and police for their swift action, and also the fact that they’re taking this seriously.”

Hargrave was also encouraged that Tuesday’s event attracted so many people, and showed that downtown is a safe, welcoming place.

“I live downtown and I park in that parking structure, and I feel safe and fine,” she said. “It is still a safe community.”

For more information on the Cultural Trust, visit http://qcct.org/.

Jonathan Turner
Jonathan Turner has been covering the Quad-Cities arts scene for 25 years, first as a reporter with the Dispatch and Rock Island Argus, and then as a reporter with the Quad City Times. Jonathan is also an accomplished actor and musician who has been seen frequently on local theater stages, including the Bucktown Revue and Black Box Theatre.
See More Articles From Jonathan Turner
Advertisement
Tagged: christine van voorencris beasonjen dobrunzLinda Bowerspaint the townQuad Cities Cultural Trustquadcities artquadcities artistsquadcities muralsRiver Music Experience