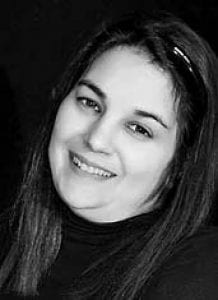 Live theater has persisted during Covid, and their latest production – the small, intimate “Feiffer’s People” – was performed in front of audiences at PV last weekend, and a filmed version will be shown online at 7 p.m. Friday, March 5 and Saturday, March 6.

“It went really well,” Myatt said Monday of the eight-member cast in PV’s huge auditorium, at 25-percent capacity maximum. “It’s a smaller cast, it allows us to work in a way, people aren’t on top of each other, they have room to spread out.”

All actors wore clear plastic masks, and of the eight students, one has been doing school virtually over the past year, so she was able to record her monologues and they’re projected in the theater as part of the 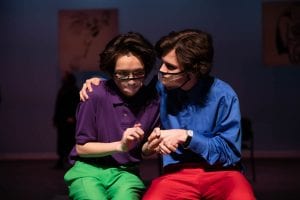 Josh Nelson, left, and Charles Budan in the PVHS play.

“ ‘Feiffer’s People’ is all a series of monologues and short scenes, and we gave her monologues so she could do hers separately,” Myatt said. “One thing the school district said in how we do theater, to make sure that we didn’t exclude anybody from what we’re doing. That’s not always possible to do, but she was also involved in the musical we did in the fall.”

Last fall, Myatt directed an unusual PV production of the musical “The Theory of Relativity,” which had two separate 13-member casts, one performing the last weekend of October and the other the first weekend in November – all sporting clear plastic masks. 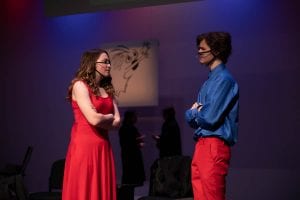 For that one, during football season, they streamed a film version online the Friday nights, she said. For “Feiffer’s People,” they performed live last weekend and are streaming it this weekend.

PV used online ticketing, and only sold auditorium seats for every other row, and in pods of 2, 3, or 4 people, Myatt said. And they did virtual programs that you can scan on your phone with a QR code.

“Feiffer’s People” averaged about 75 in the audience per night last weekend, and that type of 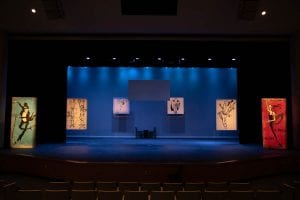 show would normally be in their smaller black-box theater, she said.

“We can’t do it in the black box, since that would not be as safe an environment,” Myatt said. “It was exciting — there was underscoring for entire show, and students on sound crew.”

PV alum Rishi Wagle (who graduated in 2016 and last year graduated from Brown University) worked on lighting and sound, and created a whole soundtrack for the show, including sound effects and projections, Myatt said. “It was a total multimedia extravaganza,” she said.

Based on the work of Pulitzer-winning cartoonist and satirist Jules Feiffer, now 92, “Feiffer’s People” is described by PV as “brief sketches, monologues and playlets which are wildly funny yet bitingly acerbic in the sharp observations

that they provide on the state of the union and the modern world in general.”

The New York Times in 1986 wrote (the year that Feiffer won a Pulitzer Prize for editorial cartooning) that his “keen ear for the open aggression, raw greed and emotional pain he perceives to be lying just beneath the surface of congenial conversation has made his cartoon 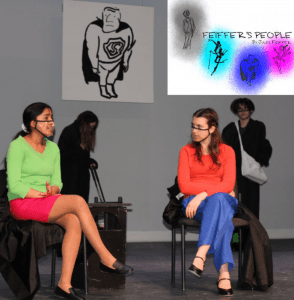 “His satirical world view is, like that of the cartoonist-playwright Garry Trudeau, highly theatrical, and his characters are as comfortable on a stage as they are on newsprint,” the review said.

In “’Feiffer’s People,” subtitled “’Sketches and Observations,” Feiffer brings his cartoon characters to life on the stage in a series of short solo and duo routines. “As any regular reader of his cartoon strips knows, Mr. Feiffer has a very specific view of the cliche-ridden, college- 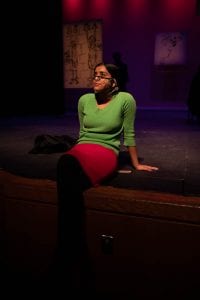 “This revue, originally produced in 1968, features a familiar Feiffer collection of bright, energetic, hopeful people who greet the world with a smile, only to discover that the world not only doesn’t know they exist, but doesn’t care in the least. The resulting hurt is traumatizing, but also often very, very funny,” the review said.

For the PV program, Myatt wrote that the play is “an exploration of the relationships we have — with ourselves, with others, with our environment, and with the issues we face in our society. We all come together with our own inherent biases, our own value systems and our differing opinions on right and wrong. We try to 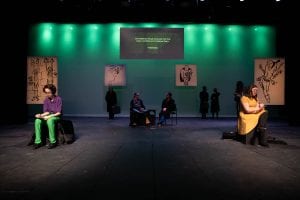 navigate through a life where it would be easier if everything was black and white when the reality is that most things are varying shades of grey.”

The tickets for “Feiffer’s People” online are $5 per person and $10 for a family, available at www.showtix4u.com/event-details/47921.

In addition as working as theater director and choreographer, Myatt is in a new position at Pleasant Valley, service learning coordinator. She works with students to complete their annual volunteer service requirements — 30 hours in freshman and sophomore years, and 40 for juniors and seniors.

The 2021 Mississippi Bend Players at Augustana has yet to be announced.

She’s currently also coordinating the rehearsals and video recording of the new Quad City Music Guild cabaret, “On With the Show.” They’re going to record individual performances from the Prospect Park theater stage later this month, and assemble a video to include photos and video snippets of past Guild productions, to be shown online two weekends in April.

Myatt also is on her second year on the Music Guild board and owns Center Stage Performing Arts Academy, 902 W. Kimberly Road, Davenport.

At PV, she will direct a new production of the 1938 Thornton Wilder classic, “Our Town,” which will be performed April 23-24, but cannot be streamed. In mid-May will be a new show, “Moving Fast,” written a by a PVHS senior, about social media and social media giants, Myatt said.

MBP at Augustana is still waiting to hear about rights for potential shows for this summer, said producing artistic director Jackie McCall. She said Tuesday that they are planning to feature Shelley Cooper (assistant professor of theatre arts) in her one-woman tribute to Mary Martin and Ethel Merman, “How I Learned to Sing,” during this summer season.

Cooper performed it, with pianist Mason Moss, at the Circa ’21 Speakeasy last September.