On Tuesday, the classic rock band The Doobie Brothers announced they will bring their 50th Anniversary Tour to Moline’s TaxSlayer Center on Saturday, Aug. 28, 2021. 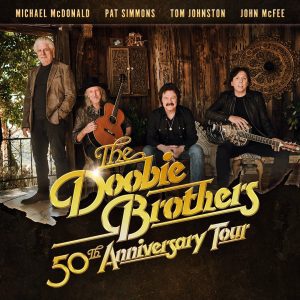 The Doobie Brothers’ 50th Anniversary Tour (including Michael McDonald) will kick off Aug. 22 at the Iowa State Fair.

Last November, The Doobie Brothers announced a 30-city North American tour to celebrate the 50th anniversary of the band’s founding. Tom Johnston, Michael McDonald, Pat Simmons and John McFee planned to be back on tour for the first time in nearly 25 years.

That announcement came at the end of the band’s performance at the legendary Ryman Auditorium in Nashville, Tenn. On Tuesday, the band added three new dates to the 50th Anniversary Tour (which is now 49 dates through June 2022) – Moline, plus Milwaukee’s BMO Harris Pavilion on Aug. 24 and Green Bay’s Resch Center Expo Pavilion on Aug. 26.

The tour will kick off Aug. 22 at the Iowa State Fair in Des Moines.

The Doobies’ released their debut album in 1971; over their long career, the band has won four Grammys, and sold more than 48 million records worldwide.

In all, The Doobies have totaled five Top 10 singles and 16 Top 40 hits. For more information, visit https://thedoobiebrothers.com/.