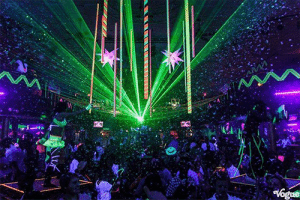 Are you ready for a different kind of concert to attend on New Year’s Eve? Rock Island Brewing Company, also known as RIBCo, is hosting a concert featuring Have your Cake and Earth Ascending. This concert will begin at 9:00 p.m. on New Year’s Eve and end at 2:00 a.m. RIBCo is located at 1815 2nd Avenue, Rock Island.

The bands will be sharing the stage fully decked out in black-light splendor. Bring your glow sticks, your trippy shirts, and party favors for the time of your night. The cost is $10 at the door. You can view the event page at: https://apps.facebook.com/events/1825037304437832/

Have Your Cake is a five-member band that was founded in 2012. The members include: Gordon Pickering on the bass, Karah Rehnberg on the trumpet, percussion and vocals, Lars Rehnberg on Lead guitar and vocals, Leif Rehnberg on the drums and vocals, and Adam Vilmont on lead vocals, acoustic guitar, and percussion. Have Your Cake performs the music of Cake and also covers other tunes in Cake’s style. Cake, the band HYC is based off of, is an American alternative rock band from Sacramento, California. You can view the band’s facebook page at: https://www.facebook.com/HaveYourCakeBand/

Earth Ascending is a progressive groove rock band that was launched in 2014. It was formed in the Quad Cities and includes five members: Michael Brock on percussion and backing vocals, Leland Chasey on bass and lead vocals, Dan Kelley on keyboards and vocals, Ben Swanson on drums and vocals, and Luke Thiele on guitar and lead vocals. You can view the band’s facebook page at: https://www.facebook.com/EarthAscending/ Cheyanne Lencioni
Cheyanne Lencioni is a student at Augustana College and has been writing stories for 8 years. She is on the college’s Equestrian Team and Fencing Club as well as a member of Augustana’s Collegia Classica Classics Language group and wants to be a published Author after graduation.
See More Articles From Cheyanne Lencioni
Advertisement
Tagged: Earth AscendingHave Your CakeRIBCO