After 60 years in broadcasting, 40 in the Quad-Cities, longtime afternoon radio host Jim Fisher has been let go by WOC-AM1420, according to various posts on social media, including one by Fisher’s longtime friend and producer Dan Kennedy.

WOC has yet to make a formal announcement and neither has Fisher, but social media was buzzing with the news today, and Fisher’s friend and former program director at WOC, Dan Kennedy, posted the following on his Facebook page today:

“Sorry to hear about my friends at IHeart Radio. Great people let go today including the legendary Jim Fisher. You all made radio better and you will be missed!”

When Kennedy was asked for clarification within the comments section of that post, he said that the move would take effect “immediately.” 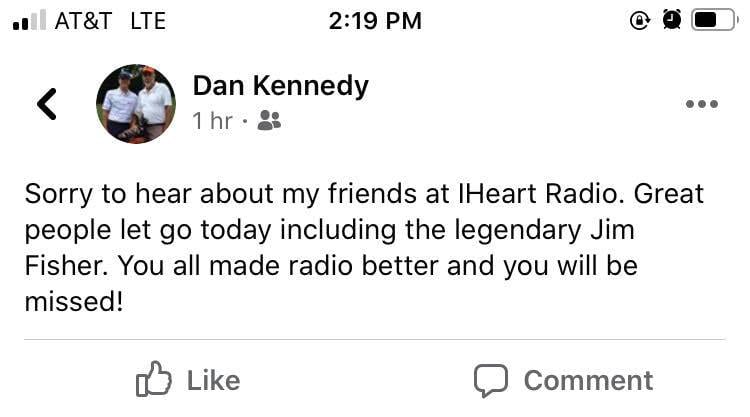 WOC and Fisher were both contacted for comment but neither has replied as of this time. The WOC social media pages contain no information about the move. The syndicated Sean Hannity Show was hear in Fisher’s regular afternoon spot this afternoon.

Agree or disagree with him, it’s undeniable Fisher was a giant in local broadcasting. He was the first talk radio host in the Quad-Cities on WOC when it switched to a talk radio format in 1980, and a dominant force in the ratings during his afternoon air shift, which ran from 2-5:30 p.m.

He graduated from Coe College and got his start in the Cedar Rapids market over half a century ago, working as a DJ in rock radio during the free form era in which disc jockeys picked their own records. As that started to phase out in the ‘70s as playlists began to become more formatted, Fisher turned his career over to talk, and found his niche. Fisher leaned on the conservative side politically and didn’t shy away from expressing controversial opinions, which perfectly suited the format and made him a popular figure in local radio for four decades.

In 2011, Fisher underwent surgery to repair his carotid artery, but returned quickly to the microphone and continued to enjoy a solid audience over the past decade.

The WOC website still has Fisher listed among its personalities, but does not feature a bio for him. There’s been no announcement of a potential replacement.

This story is ongoing, please continue to follow www.quadcities.com as we will update it as we discover more information.