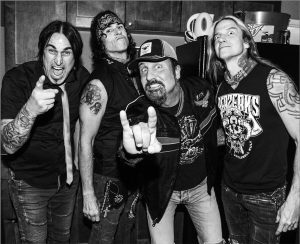 From the moment their first album was released in 1992, Jackyl has defied gravity. They were introduced at a time that rock music was taking a drastic turn toward the “shoe gazing” and the “anti-star” alternative music and/or the grunge of Seattle. No one would have bet on this band to make any kind of a showing. The possibility that this band would hang a platinum record on the wall was slim-to-none, had it not been for one key factor……the band had beat the road relentlessly and there was that ALMIGHTY fan base. A solid base of straight up blue-collar rockers that looked at each Jackyl show as more like a family reunion. The band never looked back and has never shied away from its signature “Lumberjack” chainsaw. Whereas other bands may have chosen to distance themselves from such, Jackyl embraced it, the same as Angus wearing his school boy outfit, Kiss wearing their make-up or Iron Maiden having Eddie come out onto the stage. Give the people what they want and more. And there was more, “I Stand 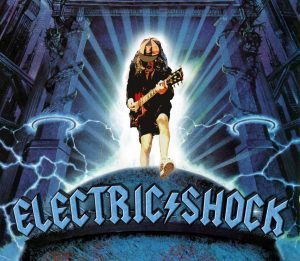 Alone”, “Down On Me”, “When Will It Rain”, “Dirty Little Mind” … All charting top-10 Rock Radio Singles. Then there were the stunts. Pulling up to a K-MART on top of a Father’s Day sidewalk sale because Walmart refused to carry their first album had a song called, “She Loves My Cock”. Then there was the Longhorn Steak House incident, where Jesse surprised some heavy weight radio station program directors with his chainsaw, and it turned into a class action lawsuit costing the band over one million dollars. Now after 25 years that first album has sold approximately 2 million copies.
Since 2014, ELECTRIC SHOCK has been perfecting the AC/DC show with a high energy performance, faithfully replicating AC/DC both musically and visually, proving they are the nations #1 AC/DC show! Playing all the classic hits and deeper cuts from both Bon Scott and Brian Johnson eras! This show is not just a tribute, but an experience that will give you the look, feel and sound like you are witnessing an actual AC/DC concert!

Sean Leary
Sean Leary is an author, director, artist, musician, producer and entrepreneur who has been writing professionally since debuting at age 11 in the pages of the Comics Buyers Guide. An honors graduate of the University of Southern California masters program, he has written over 50 books including the best-sellers The Arimathean, Every Number is Lucky to Someone and We Are All Characters.
See More Articles From Sean Leary
Advertisement
Tagged: Electric Shockjackyljackyl rocking the rust belt tonightRust Belt