I was channel surfing the other day and landed on what could’ve been any number of films, TV shows or commercials shilling anything from chips to antidepressants. I couldn’t tell what it was because I only lingered for a few moments and the only image I saw was so banal as to be useless — and ironically, it was meant to be anything but.

It was the image of a guy in a leather jacket, wearing dark sunglasses, riding a motorcycle and smoking a cigarette, as some sort of variation

of “Bad to the Bone” played in the background.

It was probably a commercial for bunion ointment.

Or it could’ve been snack chips.

Maybe even Cialis. Although that should’ve featured a song called “Good to the Bone.”

It’s difficult to pinpoint, because the image of “the rebel” has become a tired and generic trope, which is ironic, given its intent.

I think it’s time our culture stopped romanticizing the idea of general rebellion, specifically the idea of the rebel without a cause. Rebellion, at this point, has been fully appropriated and co-opted largely as a technique of selling and manipulation, a way to create waves of conformists by convincing them that they’re unique.

Rebel with a cause? Martin Luther King, Jr. Rebel without a cause? Chester Cheetah. Unless you count trying to sell Cheetos as a cause.

When the movie “Rebel Without A Cause” popularized the phrase and ideology in the 1950s, there was a reason for it. There was a nebulous feeling that things just weren’t quite right, but people either couldn’t put their fingers quite on why, or they were afraid to truly admit what it was. There were vast inequities in our culture that needed to be addressed (and wouldn’t be addressed until the social justice explosion of the 1960s), but people felt helpless to do so. There was an intrinsic feel, particularly among youth, that they were on the cusp of something, that they wanted to change things and that they had the power and time to do it, but they couldn’t quite get there. Hence the instinct to rebel but the lack of that burning motivation, or cause.

That was understandable for the time. We lived in a culture of relative ignorance. We were coming off a costly and bloody world war from which we were still recovering on a number of levels. The interstate highway system was still under construction, and travel was at a minimum. People were born and lived and died in their own little fiefdoms, under the watchful eye of peer pressure from those who wanted 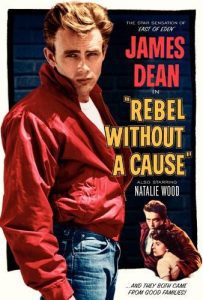 to keep the social order right where it was, both because of a deep-seeded need for security after the upheaval of the previous decade of war, and for their own self-interests.

But two things would soon change that: Travel and pop culture.

That sea change produced the wave of rebels behind legitimate causes that rocked the 1960s and beyond, and continues to resonate today. Every day, people work towards noble and legitimate change. However, unfortunately, they typically do so in anonymity and poverty while our culture cranes its attention at self-destructive insignificants.

We no longer live in a culture unenlightened, unless individuals within it will themselves to be so. At the flash of our fingertips, we can access incredible amounts of information, can brandish amazing amounts of knowledge, whether through the Internet, our local library or our area bookstore. We have no excuse to be ignorant other than our own irresponsibility and/or malaise. There is no longer a reason to be a rebel without a cause, because there are no shortage of causes to support.

That sounds daunting and monumental. A Cause. But it doesn’t have to be. Small ripples can create great waves. If you want to be a rebel, find a way to change the world for the good, whether it’s a small action in your community or part of a larger tapestry of humanity. If you want to be a rebel in a society of the impolite and boorish, be a good person, do the right thing, be polite, do no harm to others.

If you want to be a rebel, celebrate those deserving of your pride, attention and praise.

Recognize the students who toil valiantly every day in high school to get good grades and be good kids. Don’t romanticize the jerks who are hell-bent on destroying themselves and others.

Recognize the parents who love and care for their kids, who make sacrifices for them, who put in the work to raise them as good people. Don’t shine the spotlight on those who treat children as accessories or extraneous and disposable impediments to their “cool” lifestyle.

Recognize the people who, every day, anonymously make our society one that is largely pleasant to live in. Regular people doing the right thing. Rebelling against the tired and pathetic stereotype that in order to be a rebel, one must destroy rather than create, must be negative rather than positive, and must engage in aberrant rather than progressive behavior.

And don’t be ashamed.

All of you who make society better, who do the right thing, who strive to make your friends and families and the worlds around you happier.

You are the rebels.

For all the right causes.